This article is about the company which operated the HMV record label.
For the HMV Records label, see His Master's Voice.

The Gramophone Company, based in the United Kingdom, was one of the early recording companies, and was the parent organisation for the famous "His Master's Voice" (HMV) label. Although the company merged with the Columbia Graphophone Company in 1931 to form Electric and Musical Industries Limited (EMI), its name "The Gramophone Company Limited" continued in the UK into the 1970s, appearing on sleeves and labels of records (such as The Dark Side of the Moon by Pink Floyd, vinyl copies of which bear the copyright notice "©1973 The Gramophone Company, Ltd."). 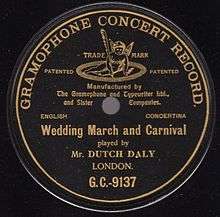 The Gramophone Company was founded in 1898 by William Barry Owen and Trevor Williams in London, England. Owen was acting as agent for Emile Berliner, inventor of the gramaphone record, whilst Williams provided the finances. Most of the company's early discs were made in Hanover, Germany at a plant operated by members of Berliner's family, though it had operations around the world.[1]

In 1898, Frederick William Gaisberg moved from the U.S. to London to set up the first disc recording studio in Europe; it was situated in Maiden Lane. Among early artists he recorded was the Syria Lamont, an Australian soprano whose single "Coming through the Rye" was one of the first ever issued. In December 1900, Owen gained the manufacturing rights for the Lambert Typewriter Company, and the Gramophone Company was for a few years renamed the Gramophone & Typewriter Ltd.

In 1900, the U.S. branch of Gramophone lost a patent infringement suit brought on by Columbia Records and Zonophone, and was no longer permitted to produce records in the U.S. Gramophone's talking machine manufacturer, Eldridge R. Johnson, left with a large factory and thousands of talking machines with no records to play on them, filed suit that year to be permitted to make records himself, and won, in spite of the negative verdict against Berliner. This victory by Johnson, which would be used in naming the new record company the Victor Talking Machine Company he would found the following year, may have been in part due to a patent-pooling handshake agreement with Columbia. The agreement allowed Columbia to produce flat records themselves, which they began doing in 1901; Columbia's records had previously been cylinders.

Contrary to some sources, the Victor Talking Machine Company was never a branch or subsidiary of Gramophone, as Johnson's manufactory, which had been making talking machines for Berliner, was his own company with many mechanical patents that he owned, which patents were valuable in the agreement with Columbia.

Thus, Victor and Columbia began making flat records in the U.S., with UK Gramophone and others continuing to do so outside the U.S. This left Edison the only major player in the making of cylinders; Columbia still made a limited number for a few years. Emile Berliner went out of the business. All he had left were the masters of his earlier records. These he took to Canada and reformed his Berliner label in Montreal, where he used the "His Master's Voice" trademark. Edison would soon join the flat record market with his diamond discs and their players.

A public relations triumph of 1907 involved Alfred Clark, a New York representative of the company. Clark encouraged the Paris Opera to seal and lock 24 records in two iron and lead containers in a basement storage room. These were to be opened in 100 years. Twenty-four more records were added in two additional containers in 1912, with a hand-crank gramophone with spare stylus needles to insure the records could be played when unsealed.

In 1989, it was discovered that one of the 1912 containers had been opened and emptied and the gramophone stolen. The three remaining containers were moved to the French National Library. When opened in December 2007, some of the records were broken, but copies of the missing and broken records were located in the French National Library. EMI digitized the collection and released it on three compact discs in February 2009 as Les Urnes de l'Opera. 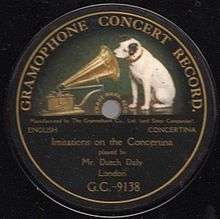 In February 1909, the company introduced new labels featuring the famous trademark known as "His Master's Voice", generally referred to as HMV, to distinguish them from earlier labels which featured an outline of the Recording Angel trademark. The latter had been designed by Theodore Birnbaum, an executive of the Gramophone Company pressing plant in Hanover, Germany. The Gramophone Company was never known as the HMV or His Master's Voice company. An icon of the company was to become very well known: the picture of a dog listening to an early gramophone painted in England by Francis Barraud. The painting "His Master's Voice" was made in the 1890s with the dog Nipper listening to an Edison cylinder phonograph, which was capable of recording as well as playing, but Thomas Edison did not buy the painting.

In 1899, Owen bought the painting from the artist, and asked him to paint over the Edison machine with a Gramophone, which he did. In 1902, Eldridge Johnson of Victor Talking Machine Company acquired U.S. rights to use it as the Victor trademark, which began appearing on Victor records that year. UK rights to the logo were reserved by Gramophone. Nipper the dog lived from 1884 to 1895 and is buried in England with a celebrated grave marker.