For other uses, see Abstraction (disambiguation). 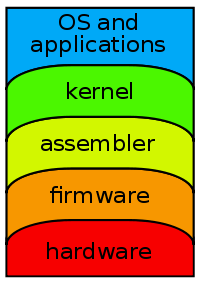 A typical vision of a computer architecture as a series of abstraction layers: hardware, firmware, assembler, kernel, operating system and applications.

In computing, an abstraction layer or abstraction level is a way of hiding the implementation details of a particular set of functionality, allowing the separation of concerns to facilitate interoperability and platform independence. Software models that use layers of abstraction include the OSI 7-layer model for computer network protocols, the OpenGL graphics drawing library, and the byte stream input/output (I/O) model originated from Unix and adopted by MS-DOS, Linux, and most other modern operating systems.

In the Unix operating system, most types of input and output operations are considered to be streams of bytes read from a device or written to a device. This stream of bytes model is used for file I/O, socket I/O, and terminal I/O in order to provide device independence. In order to read and write to a device at the application level, the program calls a function to open the device which may be a real device such as a terminal or a virtual device such as a network port or a file in a file system. The device's physical characteristics are mediated by the operating system which in turn presents an abstract interface that allows the programmer to read and write bytes from/to the device. The operating system then performs the actual transformation needed to read and write the stream of bytes to the device.

Most graphics libraries such as OpenGL provide an abstract graphical device model as an interface. The library is responsible for translating the commands provided by the programmer into the specific device commands needed to draw the graphical elements and objects. The specific device commands for a plotter are different from the device commands for a CRT monitor but the graphics library hides the implementation and device dependent details by providing an abstract interface which provides a set of primitives that are generally useful for drawing graphical objects.

In computer science, an abstraction level is a generalization of a model or algorithm, away from any specific implementation. These generalizations arise from broad similarities that are best encapsulated by models that express similarities present in various specific implementations. The simplification provided by a good abstraction layer allows for easy reuse by distilling a useful concept or metaphor so that situations where it may be accurately applied can be quickly recognized.

A good abstraction will generalize that which can be made abstract; while allowing specificity where the abstraction breaks down and its successful application requires customization to each unique requirement or problem.

A layer is on top of another, because it depends on it. Every layer can exist without the layers above it, and requires the layers below it to function.

A famous aphorism of David Wheeler is "All problems in computer science can be solved by another level of indirection".[1] This is often deliberately misquoted with "abstraction" substituted for "indirection". It is also sometimes misattributed to Butler Lampson. Kevlin Henney's corollary to this is, "...except for the problem of too many layers of indirection."