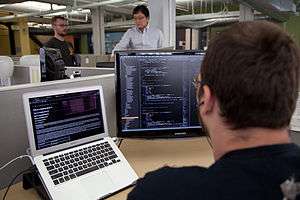 A software engineer programming for the Wikimedia Foundation

Software engineering (SWE) is the application of engineering to the design, development, implementation, testing and maintenance of software in a systematic method.[1][2][3]

When the first digital computers appeared in the early 1940s,[9] the instructions to make them operate were wired into the machine. Practitioners quickly realized that this design was not flexible and came up with the "stored program architecture" or von Neumann architecture. Thus the division between "hardware" and "software" began with abstraction being used to deal with the complexity of computing.

Programming languages started to appear in the 1950s and this was also another major step in abstraction. Major languages such as Fortran, ALGOL, and COBOL were released in the late 1950s to deal with scientific, algorithmic, and business problems respectively. Edsger W. Dijkstra wrote his seminal paper, "Go To Statement Considered Harmful",[10] in 1968 and David Parnas introduced the key concept of modularity and information hiding in 1972[11] to help programmers deal with the ever increasing complexity of software systems.

The origins of the term "software engineering" have been attributed to different sources, but it was used in 1968 as a title for the World's first conference on software engineering, sponsored and facilitated by NATO. The conference was attended by international experts on software who agreed on defining best practices for software grounded in the application of engineering. The result of the conference is a report that defines how software should be developed. The original report is publicly available.[12]

The discipline of software engineering was created to address poor quality of software, get projects exceeding time and budget under control, and ensure that software is built systematically, rigorously, measurably, on time, on budget, and within specification.[13] Engineering already addresses all these issues, hence the same principles used in engineering can be applied to software. The widespread lack of best practices for software at the time was perceived as a "software crisis".[14][15][16]

Barry W. Boehm documented several key advances to the field in his 1981 book, 'Software Engineering Economics'.[17] These include his Constructive Cost Model (COCOMO), which relates software development effort for a program, in man-years T, to source lines of code (SLOC).

The book analyzes sixty-three software projects and concludes the cost of fixing errors escalates as the project moves toward field use. The book also asserts that the key driver of software cost is the capability of the software development team.

In 1984, the Software Engineering Institute (SEI) was established as a federally funded research and development center headquartered on the campus of Carnegie Mellon University in Pittsburgh, Pennsylvania, United States. Watts Humphrey founded the SEI Software Process Program, aimed at understanding and managing the software engineering process. His 1989 book, Managing the Software Process,[18] asserts that the Software Development Process can and should be controlled, measured, and improved. The Process Maturity Levels introduced would become the Capability Maturity Model Integration for Development(CMMi-DEV), which has defined how the US Government evaluates the abilities of a software development team.

Modern, generally accepted best-practices for software engineering have been collected by the ISO/IEC JTC 1/SC 7 subcommittee and published as the Software Engineering Body of Knowledge (SWEBOK).[19]

Software engineering can be divided into 15[20] sub-disciplines. They are:

Knowledge of computer programming is a prerequisite for becoming a software engineer. In 2004 the IEEE Computer Society produced the SWEBOK, which has been published as ISO/IEC Technical Report 1979:2004, describing the body of knowledge that they recommend to be mastered by a graduate software engineer with four years of experience.[21] Many software engineers enter the profession by obtaining a university degree or training at a vocational school. One standard international curriculum for undergraduate software engineering degrees was defined by the CCSE, and updated in 2004.[22] A number of universities have Software Engineering degree programs; as of 2010, there were 244 Campus Bachelor of Software Engineering programs, 70 Online programs, 230 Masters-level programs, 41 Doctorate-level programs, and 69 Certificate-level programs in the United States.[23]

In addition to university education, many companies sponsor internships for students wishing to pursue careers in information technology. These internships can introduce the student to interesting real-world tasks that typical software engineers encounter every day. Similar experience can be gained through military service in software engineering.

The United States, starting from 2013 offers an NCEES Professional Engineer exam for Software Engineering, thereby allowing Software Engineers to be licensed and recognized.[25] Mandatory licensing is currently still largely debated, and perceived as controversial. In some parts of the US such as Texas, the use of the term Engineer is regulated by law and reserved only for use by individuals who have a Professional Engineer license. The IEEE informs the professional engineer license is not required unless the individual would work for public where health of others could be at risk if the engineer was not fully qualified to required standards by the particular state. Professional engineer licenses are specific to the state that has awarded them, and have to be regularly retaken.

In the U.K. the British Computer Society has developed a legally recognized professional certification called Chartered IT Professional (CITP), available to fully qualified members (MBCS). Software engineers may be eligible for membership of the Institution of Engineering and Technology and so qualify for Chartered Engineer status. In Canada the Canadian Information Processing Society has developed a legally recognized professional certification called Information Systems Professional (ISP).[38] In Ontario, Canada, Software Engineers who graduate from a Canadian Engineering Accreditation Board (CEAB) accredited program, successfully complete PEO's (Professional Engineers Ontario) Professional Practice Examination (PPE) and have at least 48 months of acceptable engineering experience are eligible to be licensed through the Professional Engineers Ontario and can become Professional Engineers P.Eng.[39] The PEO does not recognize any online or distance education however; and does not consider Computer Science programs to be equivalent to software engineering programs despite the tremendous overlap between the two. This has sparked controversy and a certification war. It has also held the number of P.Eng holders for the profession exceptionally low. The vast majority of working professionals in the field hold a degree in CS, not SE. Given the difficult certification path for holders of non-SE degrees, most never bother to pursue the license.

The initial impact of outsourcing, and the relatively lower cost of international human resources in developing third world countries led to a massive migration of software development activities from corporations in North America and Europe to India and later: China, Russia, and other developing countries. This approach had some flaws, mainly the distance / timezone difference that prevented human interaction between clients and developers and the massive job transfer. This had a negative impact on many aspects of the software engineering profession. For example, some students in the developed world avoid education related to software engineering because of the fear of offshore outsourcing (importing software products or services from other countries) and of being displaced by foreign visa workers.[40] Although statistics do not currently show a threat to software engineering itself; a related career, computer programming does appear to have been affected.[41][42] Nevertheless, the ability to smartly leverage offshore and near-shore resources via the follow-the-sun workflow has improved the overall operational capability of many organizations.[43] When North Americans are leaving work, Asians are just arriving to work. When Asians are leaving work, Europeans are arriving to work. This provides a continuous ability to have human oversight on business-critical processes 24 hours per day, without paying overtime compensation or disrupting a key human resource, sleep patterns.

While global outsourcing has several advantages, global - and generally distributed - development can run into serious difficulties resulting from the distance between developers. This is due to the key elements of this type of distance that have been identified as geographical, temporal, cultural and communication (that includes the use of different languages and dialects of English in different locations).[44] Research has been carried out in the area of global software development over the last 15 years and an extensive body of relevant work published that highlights the benefits and problems associated with the complex activity. As with other aspects of software engineering research is ongoing in this and related areas.

Software engineering is a direct sub-field of engineering and has an overlap with computer science and management science . It is also considered a part of overall systems engineering.

The term has been used less formally:

Software engineering sees its practitioners as individuals who follow well-defined engineering approaches to problem-solving. These approaches are specified in various software engineering books and research papers, always with the connotations of predictability, precision, mitigated risk and professionalism. This perspective has led to calls for licensing, certification and codified bodies of knowledge as mechanisms for spreading the engineering knowledge and maturing the field.

Software craftsmanship has been proposed by a body of software developers as an alternative that emphasizes the coding skills and accountability of the software developers themselves without professionalism or any prescribed curriculum leading to ad-hoc problem-solving (craftmanship) without engineering (lack of predictability, precision, missing risk mitigation, methods are informal and poorly defined). The Software Craftsmanship Manifesto extends the Agile Software Manifesto[48] and draws a metaphor between modern software development and the apprenticeship model of medieval Europe.

Dijkstra who developed computer languages in the last century refuted the concepts of "software engineering" that was prevalent thirty years ago in the 1980s, arguing that those terms were poor analogies for what he called the "radical novelty" of computer science:

A number of these phenomena have been bundled under the name "Software Engineering". As economics is known as "The Miserable Science", software engineering should be known as "The Doomed Discipline", doomed because it cannot even approach its goal since its goal is self-contradictory. Software engineering, of course, presents itself as another worthy cause, but that is eyewash: if you carefully read its literature and analyse what its devotees actually do, you will discover that software engineering has accepted as its charter "How to program if you cannot."[49]