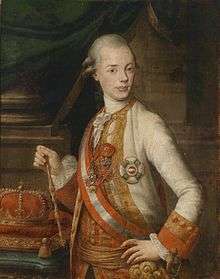 Peter Leopold, Grand Duke of Tuscany, the protector of the Academy of Georgofili

The Accademia dei Georgofili (Academy of Georofili) was established in Florence in 1753. The academy has been an historic institution for over 250 years, and is best known for promoting amongst scholars and landowners, the studying of agronomy, forestry, economy, geography, and agriculture.

The Academy of Georgofili was established in Florence at the beginning of June 1753 as a response to an essay by the Lantern Canon and Abbot Montelatici Ubaldo, who proposed new horizons of agricultural research. It originated from the need to improve agricultural production through rational utilisation of the soil. In 1783 it merged with the Botany Society and received in concession the Giardino dei Semplici (medicinal herb garden). With the Grand Duke Peter Leopold of Lorraine, who granted it his protection, the Academia acquired notable prestige. The academy brought to attention many issues facing agriculture and agricultural economics, including the renewal of agricultural equipment, education, cattle, tenant farming, swampland draining, land reclamation, grain marketing, etc.

The beginning of the Academy was not marked by activities of any special importance, the association rose to true pole of national agricultural progress in the nineteenth century, due to the studies in plow by Lambruschini Raphael and activities and research by Cosimo Ridolfi, one of the leading agronomists of the age of the Italian unification. Ridolfi proposed the reflection of greater clarity of the agronomic, geographic, economic, and social future of the land of hills that were for centuries the heart of Italian society, being marginalized by the advent of mechanized agriculture on the plains of Europe.

In addition to agronomic studies of Ridolfi, the Academy was fruitfully engaged in the nineteenth century, in the production of wine and an awareness of the poor quality of a great majority of Italian wines, and the need to radically change the technology of the cellar on the forms on the pomological, and thus was born the largest catalog of varieties of fruit on the Peninsula, the Pamona of George Gallesio.

On the night between 26 and 27 May 1993, an explosive device was set off in a Fiat Fiorino packed with explosives near the historic Tower of the Pulci, killing five people and wounding 48 others. The blast caused damage to the library of the academy, resulting in three years of restoration work in order to restore the building to its former state. The incident became known as the Via dei Georgofili bombing.

The historical archives covering the period of 1753-1911, with a total of over 12,000 manuscripts preserved, and the library is equipped with 70,000 volumes. 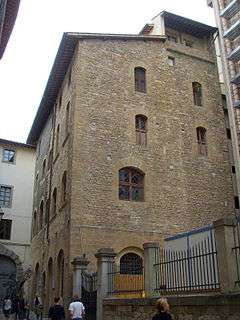 The Torre dei Pulci, seat of the archive of the academy

The term Georgofili comes from the Greek, and literally means "Earth-work-lovers", i.e.: "Devotees of agriculture.". The emblem of the Academy contains the symbols of agricultural activity, dedicated to the Goddess Ceres (I.e. an ear of grain, an olive branch, and a cluster of graphes) as well as those associated with economy activities and commerce dedicated to Mercury (caduceus, intertwined snakes and wings).

The motto of the academy is Prosperitati publicae augenda (To increase the wealth of the state) and highlights how the activities of the Georgofili are towards public interest. 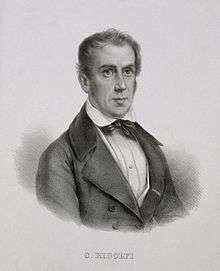