The Platonic Academy (also known as the Neoplatonic Florentine Academy) was a 15th-century discussion group in Florence, Italy. It was founded after Gemistus Pletho reintroduced Plato's thoughts to Western Europe during the 1438 - 1439 Council of Florence. It was sponsored by Cosimo de' Medici, led by Marsilio Ficino and supported by Medici until death of Lorenzo Medici. It was never a formal group but the members considered themselves a modern form of Plato's Academy. Important members were Poliziano, Cristoforo Landino, Pico della Mirandola, and Gentile de' Becchi. The academy would proceed to translate into Latin all of Plato's works, the Enneads of Plotinus, and various other Neoplatonic works.[1] 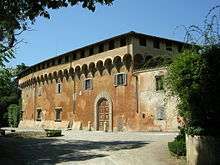 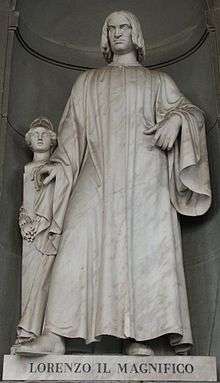 Pico della Mirandola became the first Christian scholar to master the Jewish mystical theology of Kabbalah. He attempted to develop a form of syncretism whereby different systems of thought could be harmonized based on shared elements of truth. Pico asserted that even though Platonism and Christianity had different views, they held some truths in common. An important aspect of Pico’s philosophical thought was his defense of the dignity and liberty of the human being, set forth in On the Dignity of Man (1486). Both Ficino and Pico resurrected the humanistic views of ancient Greece. However, the humanism of the Renaissance was more individualistic than the humanism of ancient times.

The biographer John Addington Symonds speculates that Michelangelo Buonarroti spent time among the members of the Platonic Academy during Buonarroti's early years in Florence, fully absorbing its doctrines and later authoring poems and other works demonstrating agreement with their doctrines.[2]

Platonic Academy was in fact dissolved soon after death of Lorenzo Medici in 1492. Poliziano and Mirandola died under very mysterious circumstances in 1494. In 2007, the bodies of Poliziano and Pico della Mirandola were exhumed from St. Mark's Basilica in Florence. Scientists under the supervision of Giorgio Gruppioni, a professor of anthropology from Bologna, will use current testing techniques to study the men's lives and establish the causes of their deaths. A TV documentary is being made of this research,[3] and it was recently announced that these forensic tests showed that both Poliziano and Pico likely died of arsenic poisoning, probably at the order of Lorenzo's successor, Piero de' Medici.[4]