In music, an accidental is a note of a pitch (or pitch class) that is not a member of the scale or mode indicated by the most recently applied key signature. In musical notation, the sharp (♯), flat (♭), and natural (♮) symbols, among others, mark such notes—and those symbols are also called accidentals. In the measure (bar) where it appears, an accidental sign raises or lowers the immediately following note (and any repetition of it in the bar) from its normal pitch, overriding sharps or flats (or their absence) in the key signature. A note is usually raised or lowered by a semitone, although microtonal music may use "fractional" accidental signs. One occasionally sees double sharps or flats, which raise or lower the indicated note by a whole tone. Accidentals apply within the measure and octave in which they appear, unless canceled by another accidental sign, or tied into a following measure. If a note has an accidental and the note is repeated in a different octave within the same measure, the accidental does not apply to the same note of the different octave.

the first seven letters of the alphabet represent the basic diatonic pitches, with additional symbols called accidentals. In addition to the sharp (♯) and flat (♭) used in Europe to indicate the displacement of a scale degree by a semitone up or down, respectively, Arabic theorists have added accidentals representing a lowering of a pitch by a quarter-tone (

) and raising it by a quarter-tone sharp (

The modern accidental signs derive from the two forms of the lower-case letter b used in Gregorian chant manuscripts to signify the two pitches of B, the only note that could be altered. The "round" b became the flat sign, while the "square" b diverged into the sharp and natural signs.

Sometimes the black keys on a musical keyboard are called accidentals or sharps, and the white keys are called naturals.[2]

Standard use of accidentals

An accidental remains in effect for the remainder of the measure.

Accidentals apply to subsequent notes on the same staff position for the remainder of the measure in which they occur, unless explicitly changed by another accidental, as shown at right. Once a barline is passed, the effect of the accidental ends, except when a note affected by an accidental is tied to the same note across a barline. Subsequent notes at the same staff position in the second or later bars are not affected by the accidental carried through with the tied note.

Though this convention is still in use particularly in tonal music, it may be cumbersome in music that features frequent accidentals, as is often the case in non-tonal music. As a result, an alternative system of note-for-note accidentals has been adopted, with the aim of reducing the number of accidentals required to notate a bar. The system is as follows:[3]

An accidental applies to a single octave only.

Because seven of the twelve notes of the chromatic equal-tempered scale are naturals (the white notes, A; B; C; D; E; F; and G on a piano keyboard) this system can significantly reduce the number of naturals required in a notated passage.

Occasionally an accidental may change the note by more than a semitone: for example, if a G♯ is followed in the same measure by a G♭, the flat sign on the latter note means it is two semitones lower than if no accidental were present. Thus, the effect of the accidental must be understood in relation to the "natural" meaning of the note's staff position. For the sake of clarity, some composers put a natural in front of the accidental. Thus, if in this example the composer wanted the note a semitone lower than G-natural, he might put first a ♮ sign to cancel the previous G♯, then the ♭. However, in most contexts, an F♯ could be used instead.

Double accidentals raise or lower the pitch of a note by two semitones,[5] an innovation developed as early as 1615. This applies to the written note, ignoring key signature. An F with a double sharp applied raises it a whole step so it is enharmonically equivalent to a G. Usage varies on how to notate the situation in which a note with a double sharp is followed in the same measure by a note with a single sharp: some publications simply use the single accidental for the latter note, whereas others use a combination of a natural and a sharp, with the natural being understood to apply to only the second sharp.

The double accidental with respect to a specific key signature raises or lowers the notes containing a sharp or flat by a semitone. For example, when in the key of C♯ minor or E major, F, C, G, and D contain a sharp. Adding a double accidental (double sharp) to F in this case only raises F♯ by one further semitone, creating G natural. Conversely, adding a double sharp to any other note not sharped or flatted in the key signature raises the note by two semitones with respect to the chromatic scale. For example, in the aforementioned key signature, any note that is not F, C, G, and D is raised by two semitones instead of one, so an A double sharp raises the note A natural to the enharmonic equivalent of B natural. 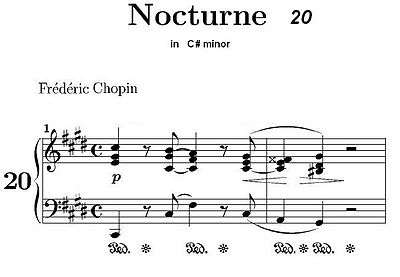 This is an example of the use of a double accidental.

Other uses are inconsistent. Courtesy accidentals are sometimes enclosed in parentheses to emphasize their role as reminders.

Composers of microtonal music have developed a number of notations for indicating the various pitches outside of standard notation. One such system for notating quarter tones, used by the Czech Alois Hába and other composers, is shown on the right.

In the 19th and early 20th centuries, when Turkish musicians switched from their traditional notation systems—which were not staff-based—to the European staff-based system, they refined the European accidental system so they could notate Turkish scales that use intervals smaller than a tempered semitone. There are several such systems, which vary as to how they divide the octave they presuppose or the graphical shape of the accidentals. The most widely used system (created by Rauf Yekta Bey) uses a system of 4 sharps (roughly +25 cents, +75 cents, +125 cents and +175 cents) and 4 flats (roughly −25 cents, −75 cents, −125 cents and −175 cents), none of which correspond to the tempered sharp and flat. They presuppose a Pythagorean division of the octave taking the Pythagorean comma (about an 8th of the tempered tone, actually closer to 24 cents, defined as the difference between 7 octaves and 12 just-intonation fifths) as the basic interval. The Turkish systems have also been adopted by some Arab musicians.

Ben Johnston created a system of notation for pieces in just intonation where the unmarked C, F, and G major chords are just major chords (4:5:6) and accidentals are used to create just tuning in other keys. Between 2000 and 2003, Wolfgang von Schweinitz and Marc Sabat developed the Extended Helmholtz-Ellis JI Pitch Notation, a modern adaptation and extension of the notation principles first used by Hermann von Helmholtz, Arthur von Oettingen and Alexander John Ellis which is rapidly becoming adopted by musicians working in extended just intonation.

History of notation of accidentals

The three principal symbols indicating whether a note should be raised or lowered in pitch are derived from variations of the small letter b:[7] the sharp (♯) and natural (♮) signs from the square "b quadratum", and the flat sign (♭) from the round "b rotundum" b.

In the early Middle Ages, a widespread musical tradition was based on the hexachord system defined by Guido of Arezzo. The basic system, called musica recta, had three overlapping hexachords. Change from one hexachord to another was possible, called a "mutation". A major problem with the system was that mutation from one hexachord to another could introduce intervals like the tritone which were considered undesirable, and then dissonance could arise. To avoid the dissonance, a practice called musica ficta arose from the late 12th century onward. This introduced modifications of the hexachord, so that "false" or "feigned" notes could be sung, partly to avoid dissonance. At first only B could be flattened, moving from the hexachordum durum (the hard hexachord) G–A–B–C–D–E where B is natural, to the hexachordum molle (the soft hexachord) F–G–A–B♭–C–D where it is flat. The note B is not present in the third hexachord hexachordum naturale (the natural hexachord) C–D–E–F–G–A.

The different kinds of B were eventually written differently, so as to distinguish them in music theory treatises and in notation. The flat sign ♭ derives from a round b that signified the soft hexachord, hexachordum molle, particularly the presence of B♭. The name of the flat sign in French is bémol from medieval French bé mol which in modern French is bé mou "soft b". The natural sign ♮ and the sharp sign ♯ derive from variations of a square b that signified the hard hexachord, hexachordum durum, where the note in question is B♮. The name of the natural sign in French is bécarre from medieval French bé quarre which in modern French is bé carré "square b". In German music notation the letter B or b always designates B♭ while the letter H or h – a deformation of a square b – designates B♮.

As polyphony became more complex, notes other than B required alteration to avoid undesirable harmonic or melodic intervals (especially the augmented fourth, or tritone, that music theory writers referred to as diabolus in musica, i.e., "the devil in music"). The first sharp in use was F♯, then came the second flat E♭, then C♯, G♯, etc.; by the 16th century B♭, E♭, A♭, D♭, G♭ and F♯, C♯, G♯, D♯ and A♯ were all in use to a greater or lesser extent.

However, those accidentals were often not notated in vocal part-books (but the correct pitches were always notated in tablature). The notational practice of not marking implied accidentals—leaving them to the performer to supply instead—was called musica ficta (i.e., "feigned music").

Strictly speaking the medieval signs ♮ and ♭ indicated that the melody is progressing inside a (fictive) hexachord of which the signed note is the mi or the fa respectively. That means they refer to a group of notes around the marked note, rather than indicating that the note itself is necessarily an accidental. For example, when a semitone relationship is indicated between F and G, either by placing a mi-sign (♮) on F or a fa-sign (♭) on G, only the context can determine whether this means, in modern terms, F♯-G or F-G♭, or even F♭–G

. The use of either the mi-sign on F or the fa-sign on G means only that "some kind of F goes to some kind of G, proceeding by a semitone".[8]

The convention of an accidental remaining in force through a measure developed only gradually over the 18th century. Before then, accidentals only applied to immediately repeated notes or short groups when the composer felt it was obvious that the accidental should continue.[9] The older practice continued in use well into the 18th century by many composers, notably Johann Sebastian Bach.[10] The newer convention did not achieve general currency until early in the 19th century.[11]