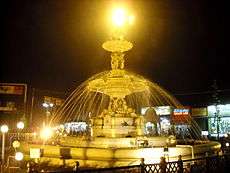 Adam's fountain is a public display fountain in Charring cross, Ooty. It was built in 1886 as a memorial to a Governor of Ooty,[1] who was very famous in the region during his tenure.[2] The total cost of finishing the fountain was between Rs. 13,000 to Rs. 14000, which was funded through public funding.[3]

The fountain was originally planned to be placed near the Ooty market. But it was decided later that the site in front of the District collector's office in Ooty was a better place as it had higher number of passers by. After building the fountain, it was discovered that the site did not have the necessary water head for the fountain to function properly. It was finally moved to its present location in Charring cross in 1898. An old melanoxylon tree which stood in the site of the present location of the fountain, which was considered as a landmark in Charring cross was removed for the construction of the fountain.

As the fountain is located in one of the most important[4] and beautiful places[5] in Ooty, it is an important tourist landmark in the Ooty town.[6]