Johann Adam Schall von Bell (simplified Chinese: 汤若望; traditional Chinese: 湯若望; pinyin: Tāng Ruòwàng) (May 1, 1592 – August 15, 1666) was a German Jesuit and astronomer. He spent most of his life as a missionary in China and became an adviser to the Shunzhi Emperor of the Qing dynasty. 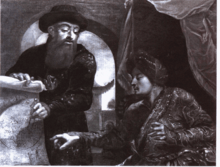 A European painting of Adam Schall dressed in mandarin robes with an Orientialized depiction of the Shunzhi Emperor.

Schall von Bell was born to noble parents in Cologne[1] or nearby Lüftelberg (today part of Meckenheim) in the Holy Roman Empire. After he graduated from the Jesuit Gymnasium in Cologne he moved to Rome and studied subjects such as mathematics and astronomy at the Collegium Germanicum. In 1611 he joined the Society of Jesus[1] and continued his education at the Gregorianum.

In 1618 he left for China on a Portuguese ship with a group of missionaries under the lead of Nicolas Trigault. The following year the group reached the Portuguese colony of Macao where Schall von Bell spent some time learning Chinese. He started missionary work inside China in 1622, but allegedly his success was limited.

Schall von Bell and Giacomo Rho were sent to Beijing in 1630 to continue the work of the deceased Johann Schreck on a reform of the Chinese calendar. He participated in modifying the Chinese calendar and compiling what is known as the Chongzhen calendar. Named after the Chongzhen Emperor, the last emperor of the Ming dynasty (1368 to 1644), the modified calendar provided more accurate predictions of eclipses of the sun and the moon.

After the Ming-Qing Transition in China, Schall von Bell gained access to the newly installed Shunzhi Emperor and became one of his trusted counsellors. He was made a mandarin and held an important post in connection with the mathematical school: Director of the Imperial Observatory and the Tribunal of Mathematics.

His position enabled him to procure from the emperor permission for the Jesuits to build churches and to preach throughout the country. That way Schall von Bell is indirectly credited with 500,000 that are said to have been baptised by Jesuit missionaries within fourteen years, making him a successful missionary.

The Shunzhi Emperor died in 1661 and Schall von Bell's position started to erode; he was imprisoned and condemned to death.[1] The sentence was not carried out, but he died after his release owing to the privations he had endured.[1] In 1664 he was challenged by Yang Guangxian and the Muslim astronomers, who accused him of having wilfully miscalculated time and place of a funeral and in that way contributed to the death of Consort Donggo. Schall von Bell and other Jesuits, Ferdinand Verbiest included, were imprisoned and condemned to death in a trial. However, after an earthquake, the Jesuits were released and the sentence was not carried out. Schall von Bell died within one year after his release due to his poor health situation caused by the conditions of his imprisonment.

A collection of his manuscripts was deposited in the Vatican Library. 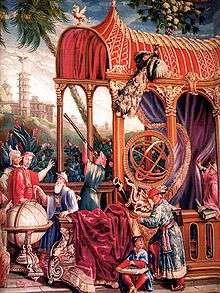 Jesuit astronomers with the Kangxi Emperor.

In 1758, an allegation, which is disputed by most Jesuits and Catholic historians, was made public. The secretary to Monsignor Charles-Thomas Maillard De Tournon reported that during the final years of his life Schall von Bell lived "separated from the other missionaries and removed from obedience to his superiors, in the house given him by the emperor with a woman whom he treated as his wife and who bore him two children."

No evidence was provided and the allegations are even contradicted by contemporaneous witnesses and official Chinese documents. It is stated that if true, the story would almost certainly have been reported by others who sought to discredit Schall von Bell and other Jesuits. In addition the Jesuit structure would most likely have reported the fact to authorities at higher levels of the order.

The 1912 Catholic Encyclopedia suggests that the source of the rumor was most likely the adoption by Schall von Bell of the son of a former Chinese servant.

Crown Prince Sohyeon, first son of King Injo of the Korean Joseon dynasty, was held hostage in Shenyang and later in Beijing. He was highly interested in western sciences and visited Schall von Bell.[2]

Schall von Bell gave him books on western sciences as well as on the Catholic faith that drew the crown prince's interest. Prince Sohyeon suddenly died when he entered Korea, which dissipated Schall von Bell's hope to extend the Jesuit's missionary work into Korea.[2]