Father Ferdinand Verbiest (9 October 1623 – 28 January 1688) was a Flemish Jesuit missionary in China during the Qing dynasty. He was born in Pittem near Tielt in the County of Flanders (now part of Belgium).[2] He is known as Nan Huairen (南懷仁) in Chinese. He was an accomplished mathematician and astronomer and proved to the court of the Kangxi Emperor that European astronomy was more accurate than Chinese astronomy. He then corrected the Chinese calendar and was later asked to rebuild and re-equip the Beijing Ancient Observatory, being given the role of Head of the Mathematical Board and Director of the Observatory.

He became close friends with the Kangxi Emperor, who frequently requested his teaching, in geometry, philosophy and music.

Verbiest worked as a diplomat and cartographer, and also as a translator, because he spoke Latin, German, Dutch, Spanish, Hebrew, and Italian. He wrote more than thirty books.

During the 1670s, Verbiest designed what some claim to be the first ever self-propelled vehicle – many claim this as the world's first automobile, in spite of its small size and the lack of evidence that it was actually built.

Ferdinand Verbiest was the eldest child of Verbiest, bailiff and tax collector of Pittem near Kortrijk, Belgium.[3] Verbiest studied humanities with the Jesuits, in Bruges and Kortrijk, and next went to the Lelie College in Leuven, for a year, to study philosophy and mathematics.[3] He joined the Society of Jesus (Jesuits) on 2 September 1641.[2] Verbiest continued studying theology in Seville, where he was ordained as a priest in 1655.[2] He completed his studies in astronomy and theology in Rome.[3] His intention had been to become a missionary in the Spanish missions to Central America, but this was not to be. His call was to the Far East, where the Roman Catholic Church was 'on mission' to compensate for the loss of (Catholic) believers to the emerging Protestantism in Europe.[3]

In 1658, Verbiest left for China from Lisbon, accompanied by Father Martino Martini, thirty-five other missionaries, the Portuguese Viceroy of the Indies and some other passengers. Their boat reached Macau in 1659, by which time all but ten of the passengers, including the Viceroy and most of the missionaries, had died.[4] Verbiest took up his first posting in Shanxi, leading the mission until 1660 when he was called to assist – and later, replace – Father Johann Adam Schall von Bell, the Jesuit Director of Beijing Observatory and Head of the Mathematical Board, in his work in astronomy. Unfortunately for them, the political situation shifted dramatically in 1661, on the death of the young Shunzhi Emperor, aged 23. His son and successor, Xuanye (the Kangxi Emperor), was only 7, so the government was placed in the hands of four regents. Unlike Shunzhi, the regents were not in favour of the Jesuits,[4] who suffered increased persecution as a result. 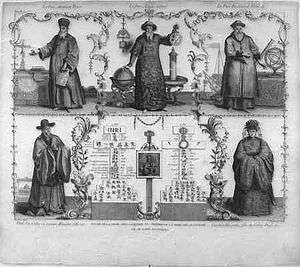 The state religion of the Manchurian ruled Qing dynasty incorporated aspects of shamanism. There was a tradition of public competitions between rival shamans to demonstrate their magic powers. In 1664, the Chinese astronomer Yang Guangxian (1597–1669), who had published a pamphlet against the Jesuits, challenged Schall von Bell to a public astronomy competition. Yang won and took Schall von Bell's place as Head of Mathematics. Having lost the competition, Schall von Bell and the other Jesuits were chained and thrown into a filthy prison, accused of teaching a false religion. They were bound to wooden pegs in such a way that they could neither stand nor sit and remained there for almost two months until a sentence of strangulation was imposed. A high court found the sentence too light and ordered them to be cut up into bits while still alive.[5] Fortunately for them, on 16 April 1665,[6] a violent earthquake destroyed the part of the prison chosen for the execution. An extraordinary meteor was seen in the sky, and a fire destroyed the part of the imperial palace where the condemnation was pronounced.[7] This was seen as an omen and all the prisoners were released. However, they still had to stand trial, and all the Jesuits but Verbiest, Schall von Bell and two others were exiled to Canton. Schall von Bell died within a year, due to the conditions of his confinement.[4]

In 1669, the Kangxi Emperor managed to take power by having the remaining (corrupt) regent, Oboi, arrested. In the same year, the emperor was informed that serious errors had been found in the calendar for 1670, which had been drawn up by Yang Guangxian. Kangxi commanded a public test to compare the merits of European and Chinese astronomy. The test was to predict three things: the length of the shadow thrown by a gnomon of a given height at noon of a certain day; the absolute and relative positions of the sun and the planets on a given date; and the exact time of an anticipated lunar eclipse. It was decided that Yang and Verbiest should each use their mathematical skills to determine the answers and that "The Heavens would be the judge". The contest was held at the Bureau of Astronomy in the presence of senior-ranking government ministers and officials from the observatory. Unlike Yang, Verbiest had access to the latest updates on the Rudolphine Tables, and was assisted by telescopes for observation. He succeeded in all three tests, and was immediately installed as Head of the Mathematical Board and Director of the Observatory. Out of consideration for him, the exiled Jesuits were authorized to return to their missions. Meanwhile, Yang was sentenced to the same death he had planned for his Jesuit rival, but the sentence was reduced to exile and he died en route to his native home.[2][4][5][8] 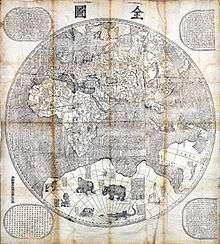 The 1670 calendar included an extra month unnecessarily, added to hide other errors and to bring the lunar months in line with the solar year. Verbiest suggested the errors should be corrected, including removing the extra month. This was an audacious move, as the calendar had been approved by the emperor himself. Fearing the emperor's response, the observatory officials begged him to withdraw this request, but he responded: "It is not within my power to make the heavens agree with your calendar. The extra month must be taken out." Much to their surprise, the emperor after studying the research, agreed, and it was done.[5]

After this, Verbiest and the emperor formed a real friendship, with the Jesuit teaching him geometry, philosophy and music. He was frequently invited to the palace and to accompany the Emperor on his expeditions throughout the empire. He translated the first six books of Euclid into Manchu and took every opportunity to introduce Christianity. In response, the Emperor elevated him to the highest grade of the mandarinate and granted permission for him to preach Christianity anywhere in the empire.[5]

Verbiest undertook many projects, including the construction of an aqueduct, the casting of 132 cannons for the imperial army – far superior to any previous Chinese weapons – and the design of a new gun carriage. He created star charts for the Kangxi Emperor in order to tell the time at night.[9] Other inventions included a steam engine to propel ships. 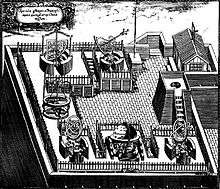 Instruments in the Beijing Observatory, some of them were built by Verbiest.

Having resolved the issues surrounding the calendar, Verbiest went on to compose a table of all solar and lunar eclipses for the next 2000 years. Delighted with this, the emperor awarded him complete charge of the imperial astronomy observatory, which he rebuilt in 1673. The existing equipment was obsolete, so Verbiest consigned it to a museum and set about designing six new instruments:[5]

These were all very large, made of brass and highly decorated, with bronze dragons forming the supports. Despite their weight, they were very easy to manipulate, demonstrating Verbiest's aptitude for mechanical design.

Verbiest died in Beijing shortly after receiving a wound from falling off a bolting horse.[16] He was succeeded as the chief mathematician and astronomer of the Chinese empire by another Belgian Jesuit, Antoine Thomas (1644–1709). His remains were buried near those of two other famous Jesuits – Matteo Ricci and Johann Adam Schall von Bell – on 11 March 1688. Visiting their tomb is not easy, since it is on the campus of a College of Political Science, but it is well-maintained.[5]

Verbiest was the only Westerner in Chinese history to ever receive the honour of a posthumous name by the Emperor. 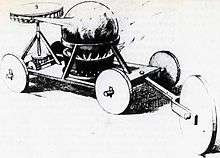 Beside his work in astronomy, Verbiest also experimented with steam. Around 1672 he designed – as a toy for the Chinese Emperor – a steam-propelled trolley which was, quite possibly, the first working steam-powered vehicle ('auto-mobile').[17] Verbiest describes it in his work Astronomia Europea. As it was only 65 cm (25.6 in) long, and therefore effectively a scale model, not designed to carry human passengers, nor a driver, it is not strictly accurate to call it a 'car'.[18]

Steam was generated in a ball-shaped boiler, emerging through a pipe at the top, from where it was directed at a simple, open 'steam turbine' (rather like a water wheel) that drove the rear wheels.

It is not known if Verbiest's model was ever built at the time, although he had access to China's finest metal-working craftsmen who were constructing precision astronomical instruments for him.

However, comparison with drawings in Hardenberg's study show that this model is not the same as Verbiest's. It is actually modelled on a small steam turbine car built in the late 18th century (presumably 1775) by a German mechanic. Unfortunately, the original was probably destroyed during a bombing raid on the Technische Hochschule Karlsruhe during World War II. However, a photo of the original car can be seen at the Deutsches Museum. Hardenberg notes that this steam turbine car operated on the same principle as Verbiest's carriage (the impulse turbine), but employed a more modern arrangement of the drive train.[20]

Verbiest is commemorated on several postage stamps. One, featuring his face, was issued in Belgium, 24 October 1988, to mark the tri-centenary of his death,[21] with a matching pictorial cancellation postmark.[22] Several more stamps were issued in Macau, in 1989 and 1999, featuring a sketch by Verbiest of the Observatory in Peking, where he worked.[21]