Addis Ababa University was founded as a two-year college in 1950 by a Canadian Jesuit, Dr Lucien Matte, S.J., at the request of Haile Selassie. It began operations the following year. Over the following two years an affiliation with the University of London was developed. The writer and theorist Richard Cummings served as a member of the Faculty of Law in the 1960s. 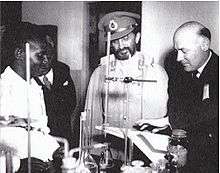 As part of their sweeping changes, the Derg ordered Addis Ababa University temporarily closed on March 4, 1975 and dispatched its 50,000 students to the countryside to help build support for the new regime. The university offered its first Master's programs in 1979 and its first PhD programs in 1987.

Three top university administrators resigned their posts in December 2002 in protest against increasing government interference in internal university matters. Government officials wanted the University to change its system of student evaluations to conform to a "gemgema" (self-criticism) system favored by the ruling party.[2]

Addis Ababa University has thirteen campuses. Twelve of these are situated in Addis Ababa, and one is located in Bishoftu, about 45 kilometers away. It also maintains branches in many cities throughout Ethiopia. The government assigns qualified students to these universities upon completion of secondary school.

Associated institutions include the Institute of Ethiopian Studies, founded by Richard Pankhurst.