Sidney Blatt has proposed a theory of personality which focuses on self-criticism and dependency.[1] Blatt's theory is significant because he evaluates dimensions of personality as they relate to psychopathology and therapy. According to Blatt, personality characteristics affect our experience of depression, and are rooted in the development of our interpersonal interactions and self-identity. He theorizes that personality can be understood in terms of two distinct dimensions - interpersonal relatedness and self-definition. These two dimensions not only represent personality characteristics, but are products of a lifelong developmental process. Disruption in self-definition or identity leads to self-criticism, and disruption in relatedness leads to dependency. Zuroff (2016) found that self-criticism showed stability across time both as a personality trait and as an internal state.[6] Such a finding is important as it supports the fact that self-criticism can be measured in the same manner as other personality traits.

Similar to Blatt's two personality dimensions, Aaron Beck (1983) defines social dependency and autonomy as dimensions of personality that are relevant for depression.[2] Autonomy refers to how much the person relies on "preserving and increasing his independence, mobility, and personal rights." Furthermore, self-criticism involves holding oneself responsible for any past or present failures. Someone who is a self-critic will attribute negative events as a result of deficiencies in their own character or performance. The personality characteristics that Beck describes as self-critical are usually negative for the person experiencing them. His description of their experience with self-criticism as a personality characteristic is therefore important because it will be similar to their experience of depression.

Self-criticism as a personality trait has been linked to several negative effects. In a study examining behavior differences between personality types, Mongrain (1998) found that self-critics experienced greater negative affect, perceived support worse than others, and made fewer requests for support.[7] Those who were high in self-criticism did not differ in the amount of support they received, only in how they accepted or requested it. Participants categorized as being higher in self-criticism had fewer interpersonal goals as well as more self-presentation goals.[8] Among romantic partners, self-criticism predicts a decrease in agreeable comments and an increase in blaming.[9]

Given that self-criticism is typically seen as a negative personality characteristic, it is important to note how some people develop such a trait. As described by the personality theories above, self-criticism often represents a disruption in some characteristic. This disruption could be rooted back in the person's childhood experience. Children of parents who use restrictive and rejecting practices have been shown to have higher levels of self-criticism at age 12.[10] In this same study, women displayed stable levels of self-criticism from age 12 into young adulthood, while men did not. These results show that parenting style can influence the development of self-critical personality, and these effects may potentially last into young adulthood. Another study found that women who were higher in self-criticism reported both that their father was more dominant and their parents maintained strict control and were inconsistent in their expressions of affection.[11] Not surprisingly, these women also reported that their parents tended to seek out achievement and success from their children, as opposed to remaining passive. These studies show that certain experiences in childhood are associated with self-criticism, and the self-critical personality type then extends into later phases of development.

Self-criticism is an important aspect of personality and development, but is also significant in terms of what this trait means for psychopathology. Most theorists described above account for self-criticism as a maladaptive characteristic, so unsurprisingly many researchers have found self-criticism to be connected to depression.

In a sample of people who either currently have depression or are in remission from a depressive episode, individuals reported both higher levels of self-criticism and lower levels of self-compassion.[5] This same study found that self-critical individuals were also at an increased risk of experiencing depression chronically over the course of their lives. Self-criticism was also able to explain the variance in depression status for currently depressed, remitted depressed, and never depressed patients, over and above other variables. Carver and Ganellen (1983) assessed self-criticism by breaking it down into three distinct categories: Over-generalization of negative events, high standards, and self-criticism.[19] These three categories all deal with self-critical cognitions, and are measured by the Attitude Toward Self Scale, which Carver and Ganellen created.

Self-criticism is known as autonomy in Beck's personality model, and there has been research looking at his conception of sociotropy and autonomy. Sociotropy characterizes people who are socially dependent, and their main source of distress is interpersonal relationships. Autonomy, however refers to self-critical individuals who are more concerned with independence and achievement. In a study examining treatment differences between these groups, Zettle, Haflich & Reynolds (1992) found that autonomous, self-critical individuals had better results in individual therapy than in group therapy.[21] This research shows that personality characteristics can influence what kind of treatment is best for an individual, and that clinicians should be aware of these differences. Therefore self-criticism is both a warning sign for the development of depression and affects how it is treated. It is an important facet of depression research, as it is important for how we might prevent and treat this debilitating disorder.

fMRI finds that engaging in self-criticism activates areas in the lateral prefrontal cortex and dorsal anterior cingulate cortex which are brain areas responsible for processing error detection and correction. In contrast, engaging in self-reassurance activates the left temporal pole and insula areas previously found to be activated in compassion and empathy. Those that as a psychological trait engage in self-criticism tend to show an activated dorsolateral prefrontal activity, while ventrolateral prefrontal cortex activity was found in those with the trait of self-reassurance.[22] 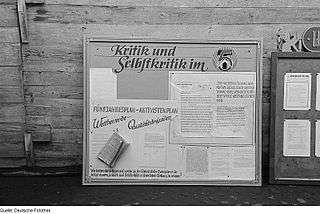 East German factory wall newspaper making use of the behavioral control mechanism of "Criticism and Self-Criticism."

Under some systems of communism, party members who had fallen out of favour with the nomenklatura were sometimes forced to undergo "self-criticism" sessions, producing either written or verbal statements detailing their ideological errors and affirming their renewed belief in the Party line. Self-criticism, however, did not guarantee political rehabilitation, and often offenders were still expelled from the Party, or in some cases even executed.

In the Soviet Union, "criticism and self-criticism" were known as kritika i samokritika (Russian: критика и самокритика).

In the People's Republic of China, self-criticism—called ziwo pipan (自我批判) or jiǎntǎo (检讨)—is an important part of Maoist practice. Mandatory self-criticism as a part of political rehabilitation or prior to execution—common under Mao, ended by Deng Xiaoping, and partially revived by Xi Jinping—is known as a struggle session, in reference to class struggle.

Such sessions could be elaborate, public and frequent, and included denunciations. Under the Khmer Rouge, self-criticism sessions were known as rien sot, meaning "religious education". In his memoir The Gate, François Bizot recalls observing the Khmer Rouge engaging in frequent self-criticism to reinforce group cohesion during his imprisonment in rural Cambodia in 1971. He wrote:

"Several evenings a week - every evening it didn't rain - the guards gathered for a collective confession. Douch (Kang Kek Iew) did not take part. I was a privileged witness to these circles, where they would sit on the ground under the direction of an elder. Military homilies alternated with simple, repetitive songs. "Comrades," began the eldest, "let us appraise the day that has passed, in order to correct our faults. We must cleanse ourselves of the repeated sins that accumulate and slow down our beloved revolution. Do not be surprised at this!"

"I," said the first one, "should have replaced the rattan rod today, the one north of the first shelter, which we use to dry clothes. I have done nothing about it... on account of my laziness." The man presiding over the session nodded with a frown, though not severely, only meaning to show that he knew how hard it was to combat inertia, so natural in man when he is not sustained by revolutionary convictions. He passed wordlessly onto the next man, indicating who this should be by pursing his lips in his direction.

"I," this one uttered, "er... I fell asleep after my meal, forgetting to make sure the bamboo urine containers in the shelters had been emptied properly."

When each had spoken in turn, they moved on to the next stage, which the elder introduced as follows: "The beloved Angkar congratulates you, comrades, for these admissions, which are so essential to the progress of each of us. In order to make our actions shine forth for ever, let us now try fearlessly to help our brother better detect his own faults, those he has not confessed because he was unwilling to see them. Who wishes to speak?" [...]

In the liberated zones, obligatory indoctrination classes began to be introduced for children from the age of eight or nine. [...] They were placed under the authority of an instructor, who imposed a very strict discipline. The master's influence over the minds of these young people was overwhelming. [23]

The Khmer Rouge adopted some of their ideological approach from the Communist Chinese model which they observed on visits in the 1960s. Pol Pot himself visited North Vietnam and China in 1965.