This article is about a former military department of England and later the United Kingdom. For other uses, see Admiralty (disambiguation).

The Admiralty was the government department [1][2] responsible for the command of the Royal Navy in the Kingdom of England, and later in Great Britain, and from 1709 [3] and until 1964 in the United Kingdom and former British Empire. Originally exercised by a single person, the Lord High Admiral, the Admiralty was, from the early 18th century onwards, almost invariably put "in commission" and exercised by the Lords Commissioners of the Admiralty, who sat on the Board of Admiralty.

In 1964, the functions of the Admiralty were transferred to a new Admiralty Board, which is a committee of the tri-service Defence Council of the United Kingdom and part of the Ministry of Defence. The new Admiralty Board meets only twice a year, and the day-to-day running of the Royal Navy is controlled by a Navy Board (not to be confused with the historic Navy Board described later in this article). It is common for the various authorities now in charge of the Royal Navy to be referred to as simply The Admiralty.

Flag of the Lord High Admiral

The office of Admiral of England (or Lord Admiral and later Lord High Admiral) was created around 1400 although there had already been Admirals of the Northern and Western Seas. In 1546, King Henry VIII established the Council of the Marine, later to become the Navy Board, to oversee administrative affairs of the naval service. Operational control of the Royal Navy remained the responsibility of the Lord High Admiral, who was one of the nine Great Officers of State.

In 1831, the first Navy Board was abolished as a separate entity, and its duties and responsibilities were given over to the Admiralty.

In 1964, the Admiralty along with the War Office and the Air Ministry as separate departments of state were abolished, and re-emerged under one single new Ministry of Defence. Within the expanded Ministry of Defence are the new Admiralty Board which has a separate (second) Navy Board responsible for the day-to-day running of the Royal Navy., the Army Board and the Air Force Board, each headed by the Secretary of State for Defence. 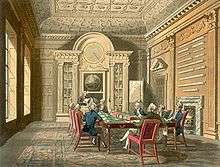 Board of admiralty about 1810. 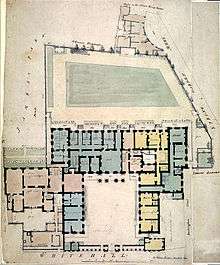 The Admiralty complex in 1794. The colours indicate departments or residences for the several Lords of the Admiralty. The pale coloured extension behind the small courtyard, on the left is Admiralty House.

The Admiralty complex lies between Whitehall, Horse Guards Parade and The Mall and includes five inter-connected buildings. Since the Admiralty no longer exists as a department, these buildings are now used by separate government departments:

The oldest building was long known simply as The Admiralty; it is now known officially as the Ripley Building, a three storey U-shaped brick building designed by Thomas Ripley and completed in 1726. Alexander Pope implied the architecture is rather dull, lacking either the vigour of the baroque style, fading from fashion at the time, or the austere grandeur of the Palladian style just coming into vogue. It is mainly notable for being perhaps the first purpose-built office building in Great Britain. It contained the Admiralty board room, which is still used by the Admiralty, other state rooms, offices and apartments for the Lords of the Admiralty. Robert Adam designed the screen, which was added to the entrance front in 1788. The Ripley Building is currently occupied by the Department for International Development.

Admiralty House is a moderately proportioned mansion to the south of the Ripley Building, built in the late 18th century as the residence of the First Lord of the Admiralty. It served that purpose until 1964. Winston Churchill was one of its occupants. It lacks its own entrance from Whitehall and is entered through the Ripley Building. It is a three-storey building in yellow brick with neoclassical interiors. Its rear facade faces directly onto Horse Guards Parade. The architect was Samuel Pepys Cockerell. There are now three ministerial flats in the building, which were unoccupied in 2012.[5]

The Admiralty Extension (which is also one of the two buildings which are sometimes referred to as the "Old Admiralty") dates from the turn of the 20th century.

This is the largest of the Admiralty Buildings. It was begun in the late 19th century and redesigned while the construction was in progress to accommodate the extra offices needed by the naval arms race with the German Empire. It is a red brick building with white stone, detailing in the Queen Anne style with French influences. It has been used by the Foreign and Commonwealth Office since the 1960s. The Department for Education will move into the building in September 2017 following the Foreign and Commonwealth Office's decision to leave the building and consolidate its London staff into one building on King Charles Street.

Admiralty Arch is linked to the Old Admiralty Building by a bridge and is part of the ceremonial route from Trafalgar Square to Buckingham Palace.

"Admiralty" as a metonym for "sea power"

In some cases, the term admiralty is used in a wider sense, as meaning sea power or rule over the seas, rather than in strict reference to the institution exercising such power. For example, the well-known lines from Kipling's Song of the Dead:

If blood be the price of admiralty,