In phonetics, advanced tongue root and retracted tongue root, abbreviated ATR or RTR, are contrasting states of the root of the tongue during the pronunciation of vowels in some languages, especially in West and East Africa but also in Kazakh and Mongolian. It used to be suggested that it was the basis for the distinction between tense and lax vowels in European languages such as German, but this no longer seems tenable.[1]

Advanced tongue root, abbreviated ATR or +ATR, also called expanded, involves the expansion of the pharyngeal cavity by moving the base of the tongue forward and often lowering the larynx during the pronunciation of a vowel. The lowering of the larynx sometimes adds a breathy quality to the vowel.

Voiced stops such as [b], [d], [g] can often involve non-contrastive tongue root advancement whose results can be seen occasionally in sound changes relating stop voicing and vowel frontness such as voicing stop consonants before front vowels in the Oghuz Turkic languages or in Adjarian's law: the fronting of vowels after voiced stops in certain dialects of Armenian.[2]

True uvular consonants appear to be incompatible with advanced tongue root, [–ATR]. Combined with the above tendency for voiced stops to be [+ATR], that motivates the extreme rarity of the voiced uvular stop [ɢ] compared to its voiceless counterpart [q].[2]

In languages in which they occur, advanced-tongue-root vowels very often contrast with retracted tongue root (RTR) vowels in a system of vowel harmony, which occurs commonly in large parts of West and East Africa.

ATR vowels involve a certain tension in the tongue, often in the lips and jaw as well; the ear can often perceive this tension as a "brightness" (narrow formants) compared to RTR vowels. Nonetheless, phoneticians do not refer to ATR vowels as tense vowels since the word tense already has several meanings in European phonetics.

The neutral position of the tongue during the pronunciation of a vowel, contrasting with advanced tongue root and thus marked -ATR, is also sometimes referred to as retracted tongue root.

The diacritic for RTR in the International Phonetic Alphabet is the right tack, [ ̙ ].

RTR vowels are often called "lax", but it is not consistent between languages or even between vowels in the same language.

As mentioned above, many African languages, such as Maasai, have systems of vowel harmony based on tongue root position. That is illustrated here with the Fante dialect of Akan, which has fifteen vowels: five +ATR vowels, five −ATR vowels, and five nasal vowels.

There are two harmonization rules that govern the vowels that may co-occur in a word:

In the Twi language, the ±ATR distinction has merged in the low vowel, so that /a/ is harmonically neutral, occurring with either set of vowels. In addition, the two vowels written e (/e̘/ and /i/) and o (/o̘/ and /u/) are often not distinguished, being approximately equivalent to European [e] and [o], as reflected in the orthography; for such people the second harmonization rule does not apply.[3]

With advances in fiber-optic laryngoscopy at the end of the twentieth century, new types of phonation were discovered that involve more of the larynx than just the glottis. One of the few languages studied thus far, the Togolese language Kabiyé, has a vocalic distinction that had been assumed to be one of tongue root. However, it turned out to be a phonation distinction of faucalized voice versus harsh voice.[4]

It is not yet clear whether that is characteristic of ±ATR distinctions in general. 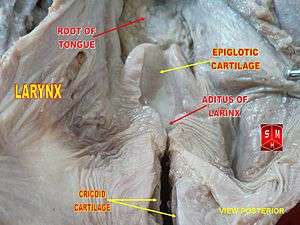