For the 'aerial lift' devices for elevating a platform, see Aerial work platform. 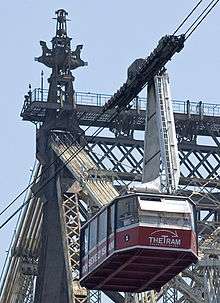 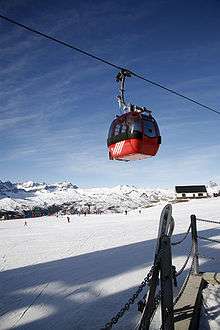 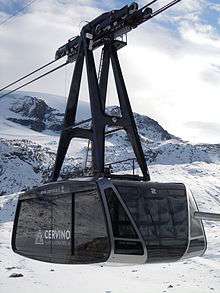 An aerial lift is a means of cable transport in which cabins, cars, gondolas or open chairs are hauled above the ground by means of one or more cables. Aerial lift systems are frequently employed in mountainous territory where roads are relatively difficult to build and use, and have seen extensive use in mining. Aerial lift systems are relatively easy to move, and are and have been used to cross rivers and ravines. In more recent times, the cost-effectiveness and flexibility of aerial lifts has seen an increase of gondola lift being integrated into urban public transport systems.

The following abbreviations are frequently used in the trade and in the industry: 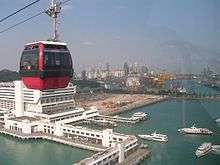 An aerial tramway, aerial tram (both U.S. English) or cable car (British English) is a type of aerial lift which uses one or two stationary ropes for support while a third moving rope provides propulsion.[1] The grip of an aerial tramway is fixed onto the propulsion rope and cannot be decoupled. Aerial trams used for urban transport include the Roosevelt Island Tramway (New York) and Portland Aerial Tram.

A gondola lift is a type of aerial lift, often called a cable car, which is supported and propelled by cables from above. It consists of a loop of steel cable that is strung between two stations, sometimes over intermediate supporting towers. The cable is driven by a bullwheel in a terminal, which is connected to an engine or electric motor. They are often considered continuous systems since they feature a haul rope which continuously moves and circulates around two terminal stations.[2] Depending on the combination of cables used for support and/or haulage and the type of grip (detachable grip vs. fixed grip), the capacity, cost and functionality of a gondola lift will differ dramatically. Because of the proliferation of such systems in the Alpine regions of Europe, the French language name of Télécabine is also used in an English language context. Gondola lifts are also used for urban transportation. Examples include the Singapore Cable Car, Ngong Ping Skyrail (Hong Kong), Metrocable (Medellín), Metrocable (Caracas), Mi Teleférico (La Paz), and Emirates Air Line (London).

Gondola lifts should not be confused with aerial tramways as the latter solely operates with fixed grips and simply shuttles back and forth between two end terminals. 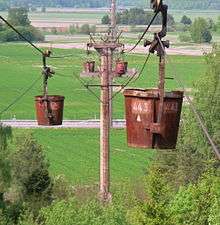 A ropeway conveyor or material ropeway[3] is essentially a subtype of gondola lift, from which containers for goods rather than passenger cars are suspended.

Ropeway conveyors are typically found around large mining concerns, and can be of considerable length. The COMILOG Cableway, which ran from Moanda in Gabon to Mbinda in the Republic of the Congo, was over 75 km in length. The Norsjö aerial tramway in Sweden had a length of 96 kilometers. 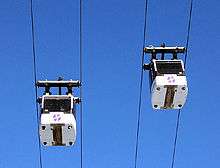 When used to transport skiers, funitels are a fast way to get to a higher altitude. However, because skis or snowboard have to be taken off and held during the trip, and because of the (usual) absence of seats, funitels can sometimes be uncomfortable for long trips, in the same way other large gondolas can be. Funitels combine a short time between successive cabins with a high capacity (20-30 people[4]) per cabin. Funitels are able to tolerate higher wind speeds than classic gondola lifts because they are fastened to two steel cables instead of one.

A Funifor is a type of aerial lift or aerial tramway with two guide ropes and a haul rope loop per cabin. The Funifor design is patented by Doppelmayr Garaventa Group.[5] Two reversible cabins run on parallel tracks. The drives of the two cabins are not interconnected. At the top of each track, the haul rope for that track loops back to the bottom instead of looping over to serve the other track as occurs with a normal aerial tramway. This feature allows for single cabin operation when traffic warrants. The independent drive also allows for evacuations to occur by means of a bridge connected between the two adjacent cabins. [6] The main advantage of the Funifor system is its stability in high wind conditions owing to the horizontal distance between the two guide ropes comprising each track.[5]

In Japan, all the systems above are regarded as a same kind of rail transport and called ropeway (ロープウェイ, ro-puwei) 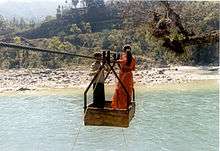 A tuin in use in Nepal

In developing countries with rough terrain, simple hand-powered cable-cars may be used for crossing rivers. Examples include the tuin used in Nepal.[7][8] 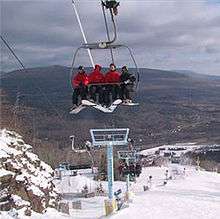 A chairlift in Bad Hofgastein, Austria

An elevated passenger ropeway, or chairlift, is a type of aerial lift, which consists of a continuously circulating steel cable loop strung between two end terminals and usually over intermediate towers, carrying a series of chairs. They are the primary onhill transport at most ski areas (in such cases referred to as 'skilifts'), but are also found at amusement parks, various tourist attractions, and increasingly, in urban transport. 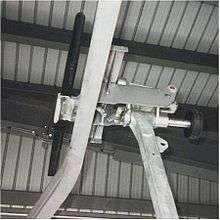 Detachable quad chairlift grip. (Chair is on a sidetrack). This type of grip can be seen on Dopplemayr high speed quads built between 1985 and 1995.

A detachable chairlift or high-speed chairlift is a type of passenger aerial lift, which, like a fixed-grip chairlift, consists of numerous chairs attached to a constantly moving wire rope (called a haul rope) that is strung between two (or more) terminals over intermediate towers. They are now commonplace at all but the smallest of ski resorts. Some are installed at tourist attractions as well as for urban transportation.

The significance of detachable chairlift technology is primarily the speed and capacity. Detachable chairlifts move far faster than their fixed-grip brethren, averaging 1200 feet per minute (13.6 mph, 6 m/s) versus a typical fix-grip speed of 500 ft/min (5.5 mph, 2.5 m/s). Because the cable moves faster than most passengers could safely disembark and load, each chair is connected to the cable by a powerful spring-loaded cable grip which detaches at terminals, allowing the chair to slow considerably for convenient loading and unloading at a typical speed of 200 ft/min (2.2 mph, 1 m/s), a speed slower even than fixed-grip bunny chairlifts.