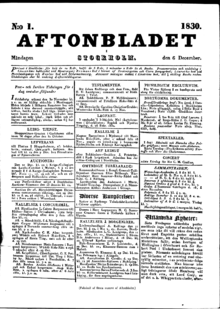 The first page of the first issue of Aftonbladet

In a hand-written bill from the Stockholm riots during the Revolutions of 1848, support for the then-banned Aftonbladet is coupled with a call for overturning the monarchy and instituting a republic

Aftonbladet (Swedish: [²aftɔnˌblɑːdɛt]) is a Swedish tabloid published in Stockholm, Sweden. It is one of the larger daily newspapers in the Nordic countries.

The newspaper was founded by Lars Johan Hierta in December 1830 under the name of Aftonbladet i Stockholm[1][2][3] during the modernization of Sweden. In 1852 the paper began to use its current name, Aftonbladet, after 25 name changes.[1] It describes itself as an "independent social-democratic newspaper".[2] but it also publishes extreme left wing columnists in its culture section.[4]

The owners of Aftonbladet are the Swedish Trade Union Confederation (LO) which bought it in the 1950s[5] and Norwegian media group Schibsted which acquired its share in the paper in the late 1990s.[6] LO sold a large of its shares in the paper to the Schibsted group.[7] As per 15 June 2009 Schibsted bought another 41% and became the majority owner with 91%.[8] However, LO has the right to appoint the political editor of the paper.[7]

Aftonbladet, based in Stockholm,[3] is published in tabloid format.[9] The paper reported news and also criticised the new Swedish king Charles XIV John. The king stopped Aftonbladet from being printed and banned it. This was answered by starting the new newspaper "Det andra Aftonbladet" (The second Aftonbladet), which was subsequently banned, followed by new versions named in similar fashion until the newspaper had been renamed 26 times, after which it was allowed by the king.[10]

During its existence, Aftonbladet has leant in different political directions. Initially liberal, it drifted towards conservatism under Harald Sohlman, editor in chief from 1890 to 1921. During World War I, a majority holding was sold to the German government in a secret arrangement.

In 1929 the newspaper came under the control of the Kreuger family, when a majority of the shares was bought by Swedish Match, at that time the heart of Ivar Kreuger's corporate empire. Aftonbladet was labeled "neutral". In 1932 it backed Per Albin Hansson's new Social Democratic government. Just a few years later it realigned with the Liberal Party and turned to advocate liberal politics. Heavily influenced by pro-German staff members, the newspaper supported Germany during World War II.[11]

The Kreuger era came to an end on 8 October 1956. Despite interest from both the Liberal Party and the Centre Party, Torsten Kreuger sold Aftonbladet as well as Stockholms-Tidningen to the Swedish Trade Union Confederation.[12] The ownership change was first followed by a slight drop in circulation. In the 1960s, however, the newspaper saw its circulation surge rapidly, peaking at 507,000.

By the early 1990s Aftonbladet had run into economic problems, and many had begun to question the competence of the trade union movement as a media owner. On 2 May 1996, the Norwegian media group Schibsted acquired a 49.9 percent stake in the newspaper. The Swedish Trade Union Confederation kept the remaining 50.1 percent of its shares. The same year its circulation passed that of long-time tabloid rival Expressen. In 2005 Aftonbladet started a Web portal for business news as a joint venture with Svenska Dagbladet.[13]

Aftonbladet adopted Internet publishing early on. It has been published on the world wide web since 25 August 1994, and the main news service is free. Since its inception, aftonbladet.se has consistently been rated as one of the five most visited Swedish websites in various surveys.

The journalistic quality of Aftonbladet has sometimes been questioned. In late 2006, the newspaper's own journalist Peter Kadhammar directed criticism at the fact that his own paper appears to treat the love life of Swedish tabloid celebrity Linda Rosing as equally important to the war in Iraq.[18]

The Swedish film director Ingmar Bergman claimed that Aftonbladet was the main media force behind echoing his alleged financial misdeeds, which finally led to Bergman's self-imposed exile to Munich in the 1970s. In his memoir book Laterna Magica, Bergman called Aftonbladet a rubbish yellow paper which had deliberately aimed to tarnish his reputation.

Some commentators have argued that Aftonbladet, criticising Israel, too often contain content that alludes to antisemitism.[19][20][21][22] Per Ahlmark, former Deputy Prime Minister of Sweden and founder of the Swedish Committee Against Antisemitism, writes in his 2004 book Det är demokratin, dumbom! ("It's the Democracy, Stupid!"): "Aftonbladet is of course worst among the big newspapers when it comes to both playing on antisemitic strings and then denying that they have done so".[20]

Much of these criticism was rehashed in 2009 when Aftonbladet ran an article[23] alleging that in 1992 the Israeli Defense Force took organs from Palestinians who died in Israeli custody. Jonathan Leman and Charlotte Wiberg from the Swedish Committee Against Antisemitism acknowledges that while Aftonbladet stay just clear of being antisemitic, the op-ed fell into a long-established and problematic pattern of publishing content that borders on outright antisemitism in a way that few other newspapers in Sweden do.[24]