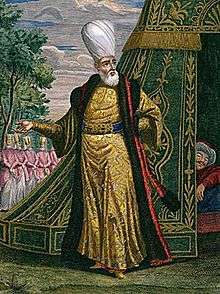 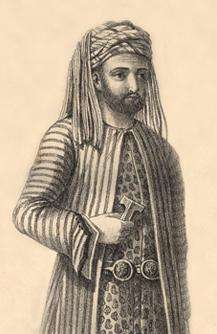 Agha, also Aga (Ottoman Turkish: أغا, Persian: آقا ağa "chief, master, lord"[2]), as an honorific title for a civilian or military officer, or often part of such title, was placed after the name of certain military functionaries in the Ottoman Empire. At the same time some court functionaries were entitled to the agha title.

The word agha entered English from Turkish,[2] and the Turkish word comes from the Old Turkic aqa, meaning "elder brother".[3] and that from Mongolian word aka.[4]

In Kurdistan, within the tribal Kurdish society, "agha" is the title given to tribal chieftains, either supreme chieftains, or to village heads. It is also given to wealthy landlords and owners of major real estates in the urban Kurdish centers, although these landlords are usually with heavy tribal relations. The common tribesmen would honor the chieftains or the village heads by calling them "agha" or "agha" so and so. The "agha" would usually have a diwan or diwan-khane, a special room, or house, dedicated to the "agha" and his male guests, for sitting and drinking tea, discussing the affairs of the tribe and other mundane subjects. The agha and his guests would listen at times for local or visiting singers and story tellers (usually Jewish merchants or peddlers), who would entertain the "agha" and his guests. The common agha was in fact one person who was in charge of several major tasks of the tribal society under his jurisdiction: He was the head of the political unit, the main judge and arbitrator, the main military leader of his armed tribesmen, the main finance minister responsible mainly for receiving dues from his subjects for their harvest and commercial transactions committed under his jurisdiction. One of the best studies on "aghas" in the Kurdish society is the important book of Mordechai Zaken, Jewish Subjects and their tribal chieftains in Kurdistan.[5]

This article is issued from Wikipedia - version of the 5/16/2016. The text is available under the Creative Commons Attribution/Share Alike but additional terms may apply for the media files.