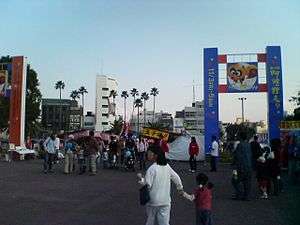 The grounds for the Awa no Tanuki Festival （November 5, 2006）

Found alongside the Shinmachi River that winds its way through the middle of Tokushima City, the Aibahama Park grounds are known as a popular place for events. In April there is the Hana Haru Festa, and the grounds are also used for one of the dancing stages in Awa Odori held during O-bon. Aibahama Park is also used during the local Awa no Tanuki Festival in November each year, and is the permanent home for the Tokushima Arts Foundation for Culture.

Facilities on the grounds

This article is issued from Wikipedia - version of the 3/19/2013. The text is available under the Creative Commons Attribution/Share Alike but additional terms may apply for the media files.