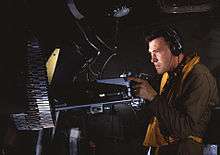 An air gunner (AG) also known as aerial gunner is a member of an air force aircrew who operates flexible-mount or turret-mounted machine guns or autocannons in an aircraft. Modern aircraft weapons are usually operated automatically without the need for a dedicated air gunner, but older (World War II and earlier) generation bombers used to carry up to eight air gunners.

Most modern air gunners are helicopter door gunners, who typically have other primary roles such as crew chief or observer in addition to their air gunner role. Others fly as members of aircrews on gunships where their duties can include loading ammunition into guns and can manually fire the guns if computer systems fail.