"Tailgunner" redirects here. For the song of this name, see No Prayer for the Dying. 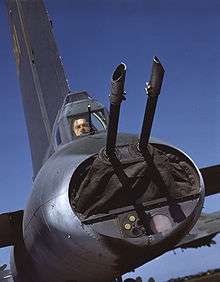 A tail gunner or rear gunner is a crewman on a military aircraft who functions as a gunner defending against enemy fighter attacks from the rear, or "tail", of the plane. The tail gunner operates a flexible machine gun emplacement in the tail end of the aircraft with an unobstructed view toward the rear of the aircraft. While the term tail gunner is usually associated with a crewman inside a gun turret, the first tail guns were operated from open apertures within the aircraft's fuselage, like in the Scarff ring mechanism used in the British Handley Page V/1500 (a 1918 aircraft), and also, in the most evolved variants of this type of air-to-air anti-aircraft defense, they may also be operated by remote control from another part of the aircraft, like in the American B-52 bombers (an aircraft first introduced in 1955 but still in service). 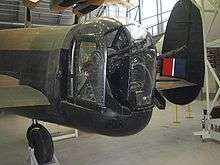 The tail gun armament and arrangement varied between countries. During World War II, most United States Army Air Forces heavy bomber designs such as the Boeing B-17 Flying Fortress and Boeing B-29 Superfortress used a fixed gunner position with the guns themselves in a separate mounting covering an approximately 90-degree rear arc. Typical armament was two 0.50 inch M2 Browning machine guns.

In contrast, Royal Air Force heavy bombers such as the Avro Lancaster and Handley Page Halifax used a powered turret capable of 180-degree rotation containing the tail gunner and four 0.303 inch Browning machine guns. A similar arrangement was used in the American B-24 Liberator heavy bomber (but with two 0.50 inch heavy machine guns.) Most British turrets were manufactured by two companies Nash & Thomson and Boulton & Paul Ltd and the same turret model was fitted to a number of different aircraft.

In most many German and Italian aircraft, and smaller ground attack aircraft and dive bomber, no tail gunner was used but a dorsal gun behind the cockpit or ventral gun along the belly of the aircraft replaced the tail gunner position covering the tail. This position was blocked by the fuselage but allowed better weight distribution.

The tail gunner's role was mainly as a lookout for attacking enemy fighters, particularly in British bombers operating at night. As these aircraft operated individually instead of being part of a bombing formation, the bombers' first reaction to an attacking night fighter was to engage in radical evasive maneuvers such as a corkscrew roll; firing guns in defense was of secondary importance. The British slang term for tail gunners was "Tail-end Charlies",[1][2] while in the Luftwaffe they were called Heckschwein ("tail-end pigs").

In the autumn of 1944, the British began deploying Lancasters fitted with the Automatic Gun-Laying Turret, which was fitted with a 3 GHz (9.1 cm) radar. The image from the radar's cathode ray tube was projected onto the turret's gunsight, allowing the gunner to fire on targets in complete darkness, with corrections for lead and bullet drop being automatically computed.

The Russian Sikorsky Ilya Muromets (model S-25 variant Geh-2, from March 1916) was the first aircraft equipped with a tail gun position (here, in this photograph, an aircraft of the Imperial Russian Air Service).

The first aircraft to ever have incorporated a tail gunner position was the Sikorsky Ilya Muromets bomber, during World War I and the last years of the Russian Empire. The Ilya Muromets prototype flew for the first time in 1913, with no guns on board and no rear position for the crew. When the war broke out, in 1914, only a few Ilya Muromets copies were built, but increasing numbers were required because of the war effort. After having entered the mass-production phase and having seen combat all along the first year of war against the fighter planes of the German Empire, a rear-defending position appeared to the Imperial Russian Air Service to be more and more vital to protect both the plane and its crewmen.

Sikorsky S-25 Geh-2: a close-up of the gunner sitting in the extreme tail of the aircraft. Notice how the central rudder and the stabilizer were modified to allow the gunner to operate his weapon in all directions. The aircraft on the picture was in service in the Red Air Force.

This is how, on March 1916, saw light of day the model S-25 (variant Geh-2) of the Sikorsky Ilya Muromets bomber plane. This aircraft was the first in history to include on its ending tail area a gunner position.[3] Mass-production of Ilya Muromets bombers, all in all variants included, lasted in 1918 with a total of more than 80 copies. Those Ilya Muromets copies that served after the Russian Revolution, served with soviet red star insignias in the Red Air Force.[3]

Another example of a World War I era aircraft equipped with a tail gunner position was the British Handley Page V/1500, but it did enter service at the very end of the war, during the months of October and November 1918, and finally never saw any kind of combat action. After that, during the 1920s and 30s, a few more military aircraft designs came with a gunner position on their tails, like the 1920s British Vickers Virginia (on service as of 1924) or the 1930s Japanese flying boat Kawanishi H3K (on service as of 1930). One of the first aircraft to operate a fully enclosed tail gun turret was the British Armstrong Whitworth Whitley. After a first flight in 1936, the British Whitleys were in service until the end of World War II (1939–1945).

In the overall history of its use in combat, the tail gunner was most commonly used during that conflict, World War II, and in almost every aircraft model in which it was fitted, the tail gun position was constituted of an enclosed compartment inhabited by the gunner. During World War II, this extreme tail compartment could consist, generally:

In the last years of the war, the American B-29 bombers were equipped with a tail gun position in which the gunner still had a direct view on his target while operating his synchronized weapons, but some other gun positions of this particular model of Boeing bomber were, for the first time in an aircraft, operated from other parts of the plane, each one spotting the target by means of a periscopic viewing system. In the years that followed the war, more and more subsequent tail gun positions in aircraft inherited this viewing and sight method, ending afterwards with added radar sights and radar targeting systems, which had been early tested during the World War II period (like in the radar-aimed FN121 turret fitted to some Lancaster and Halifax bombers in 1944, see above).

The tail gunner was mainly last used in combat during the Vietnam War, on large bombers. At this point, the position has become largely obsolete due to advancements in long-range air combat weapons such as air-to-air missiles as well as modern detection and countermeasures against such armaments. 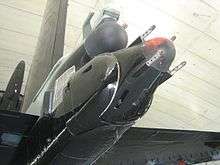 On 24 December 1972, during the same bombing campaign, B-52 Stratofortress Diamond Lil was attacking railroad yards at Thái Nguyên when the tail gunner detected a MiG-21 8 miles (13 km) away climbing to intercept.[5] The aircraft took evasive action and dropped chaff and flares while the gunner fired around 800 rounds from 2,000 yards, causing the MiG-21 to fall, on fire.[6] That incident was the last tail gunner to shoot down an enemy aircraft with machine guns during wartime.[7]

The last combat usage of tail gunners by the United States was in 1991, during the Gulf War. During the war, a missile struck a B-52 by locking onto the tail gunner's radar. It is disputed whether or not it was friendly fire by an F-4 Phantom[8] or an enemy missile fired from a MiG-29.[9] On 1 October 1991, Master Sergeant Tom Lindsey became the last USAF tail gunner to serve on a B-52 sortie.[10]

This is a list of aircraft with tail gun positions.

He 177 A-5 tail gun position, with MG 151 cannon and bulged upper glazing for upright gunner's seating 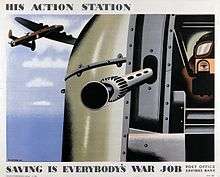 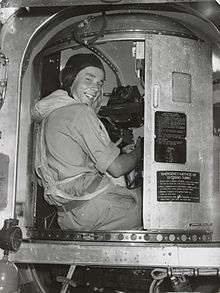 Tail gunner in B-24 Liberator