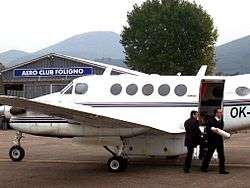 An air taxi is a small commercial aircraft which makes short flights on demand.[1]

In 2001 air taxi operations were promoted in the United States by a NASA and aerospace industry study on the potential Small Aircraft Transportation System (SATS) and the rise of light-jet aircraft manufacturing.[2]

In Canada, air taxi operations are regulated by Transport Canada under Canadian Aviation Regulation 703. The Canadian definition of air taxi includes all commercial single engined aircraft, multi-engined helicopters flown by day visual flight rules by one pilot and all multi-engined, non-turbo-jet aircraft, with a maximum take-off weight 8,618 kg (18,999 lb) or less and nine or fewer passenger seats, that are used to transport people or goods or for sightseeing.[3]

In the United States, air taxi and air charter operations are governed by Part 135 of the Federal Aviation Regulations (FAR), unlike the larger scheduled air carriers which are governed by more stringent standards of FAR Part 121.[4]