Al-Rasheed Sports Club (Arabic: نادي الرشيد الرياضي‎‎) was an Iraqi sports club based in Karkh, Baghdad. Its professional football team played in the Iraqi Premier League, the top tier of the Iraqi football, from 1984 until 1990. The club's home stadium was Al-Karkh Stadium (then known as Al-Rasheed Stadium).

Founded in 1983 by Uday Hussein, Al-Rasheed were promoted to the top tier in their first season of existence and went on to win 3 league titles in the row, 2 FA Cups, 3 Arab Champions Cup titles, and reach the final of the 1988–89 Asian Club Championship. In 1990, the club was dissolved and all its properties as well as its place in the top division were transferred to Al-Karkh SC.

Taking the Al-Karkh Stadium as his club's, on 23 November 1983, Uday Hussein founded a new sports club named Al-Rasheed. The team was put straight into the second division of Iraqi football by Uday. A few days after their foundation, they played their first match in the second division (Baghdad Group) and it was against Al-Karkh, the team that would replace them seven years later; Al-Rasheed won the game 4–0. They were promoted to the Iraqi Premier League in their first ever season, after achieving the 2nd Division title.[1] Uday Hussein brought most of the Iraq national team players into the club, managed by Ammo Baba, the head coach of the national team at the time. The most popular of them were Ahmed Radhi, Adnan Dirjal, Samir Shaker, Haris Mohammed, Habib Jafar, and Laith Hussein.[2] Many of them, including Ahmed Radhi, were forced to join the club and had no choice in the matter. Uday Hussein was also known to punish players who did not perform up to standards, and often forced them to completely shave their heads before matches to embarrass them in public.

Squad of Al-Rasheed during the 1984–85 season, along with Uday and Qusay Hussein

Al-Rasheed dominated the Iraqi football from the club's foundation until its dissolving. In their first season in the Iraqi Premier League, the 1984–85 season, Al-Rasheed were in 1st place, at 41 points, but because of the league being abandoned, no champions were announced.[3] After the abandonment of the league, Al-Rasheed set up the Al-Rasheed Cup which contained 12 of the 14 Iraqi League teams as well as four lower division teams. Al-Rasheed won this tournament by beating Al-Zawra'a in the final. They participated in the 1985 Asian Club Championship but were knocked out in round 2 of the qualifiers. They finished 2nd in the 1985–86 Iraqi League,[4] but won the 1986 Saddam International Tournament which contained teams from all around the world including Iraq, Brazil, Kenya, Jordan, Morocco and Kuwait.[5] Being managed by Ammo Baba, they achieved the league in the 1986–87 season,[6] along with the Iraq FA Cup, after beating Al-Jaish.[7] In the 1987 Asian Club Championship they were knocked out in the final group stage. Another double success came under the management of Jamal Salih in the 1987–88 season.[7][8] In the 1988–89 season, Al-Rasheed achieved the league to be their last ever achievement.[9] Al-Rasheed became the first team to win the Iraqi Premier League three times in the row since it started in 1974.[10]

Al-Rasheed also achieved the Arab Champions Cup three times in the row; defeating USM El Harrach in 1985 in Al-Shaab Stadium,[11] ES Tunis in 1986 in Stade El Menzah,[12] and beating Al-Ittihad in the final of 1987 in Prince Faisal bin Fahd Stadium.[13] Al-Rasheed also finished third in the 1989 Arab Cup Winners' Cup. Al-Rasheed's biggest achievement is that they reached the 2nd place of the 1988–89 Asian Club Championship, after losing by the away goal rule to Al Sadd.[14] They were the first Iraqi team to reach the final of Asia's main club competition since Al Shorta SC in 1971. In the next edition of the Asian Club Championship in 1989–90, Al-Rasheed were very close to reaching the final again, but they failed to. They also failed to win the league title, and they failed to win the cup as they were immediately knocked out embarrassingly by Al-Tijara, who weren't even in the top division, 3–2 on aggregate. Therefore, they ended the season without winning a single trophy. 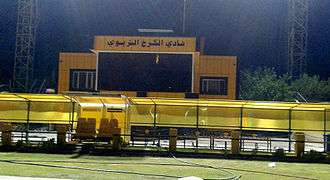 In 1984, Al-Rasheed took over the Al-Karkh Stadium and turned it into theirs after renovating it and allowing shops to be opened around it. In the dissolving of Al-Rasheed, the stadium returned to its old name as the stadium of Al-Karkh SC.[15]