This article is about the city in northern Qatar. For the municipality in which the city is located, see Al Khor Municipality. For other uses, see Khor (disambiguation).

Al Khor is a coastal city in northern Qatar, located 50 kilometres north of the capital, Doha. It is the capital city of the municipality of Al Khor. The name of the city means creek in Arabic as the town is located on a creek. Al Khor is home to many employees of the oil industry due to its proximity to Qatar's northern oil and natural gas fields, and due to its proximity to the Ras Laffan Industrial City. 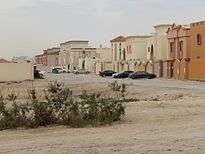 Historically, Al Khor was ruled by the Al Muhannadi, a tribe which consists of several Bedouin families. According to oral tradition, Al Khor was first settled by the Al Muhannadi tribe in the late 18th century.[2] The settlement expanded its borders after one of their hunting groups discovered a substantial water source near the coast in the mid-19th century.[3] This led them to construct Ain Hleetan Well, which helped sustain the villagers' basic needs. Some locals believed that water obtained from Ain Hleetan possessed medicinal properties.[4]

J. G. Lorimer's Gazetteer of the Persian Gulf gives an account of Al Khor (referred to as Khor Shaqiq) in 1908:

"Generally pronounced as Shajij or Shagig. The name of an inlet and of the village which it contains, upon the east side of the Qatar Promontory: the entrance of the inlet, which is shallow and runs about 4 miles inland, is situated between Ras-an-Nof and Ras Matbakh, about 26 miles north of Doha. Khor Shaqiq is frequently called "Khor-al-Mahandah [Muhannadi]," or simply "Khor," in contradistinction to "Al Khuwair," on the other side of the peninsula.

The village stands on the south side of the inlet, near its foot; not far from it is a hill, surmounted by a watch tower, and under the hill is a well of good water called Halaitan. Al Thakhira is only 4 miles to the northward of Khor Shaqiq and is reached by a track which turned the foot of the inlet and then crosses a level plain. Four miles south of Khor Saqiq is Halat Wabil, an island-reef, still covered at high-tide but said to be rapidly increasing in elevation. The village consists of about 400 mud and stone houses of Mahandah (Al Muhannadi), half of the Al Hasan and half of the Misandah section, to whom belong 80 pearl boats [manned by 1200 men], 90 other sea-going vessels and 30 fishing boats, besides 100 camels."[5]

Due to the continuous expansion at Ras Laffan Industrial City, the number of facilities and services available in the town is rapidly increasing. In October 2015, Ashghal (Public Works Authority) revealed that it would be investing billions of Qatari riyals into developing infrastructure in Al Khor. Its plan includes the creation of additional hospitals and schools, and the refurbishment of the road system.[6]

One major sports stadium currently exists in the city: Al-Khor SC Stadium, whose tenants are Al Khor SC. Al Bayt Stadium is planned to be completed by the 2022 FIFA World Cup. Al Bayt Stadium, which translates to 'the house', is designed to replicate a traditional tent used by Qatari nomads. The seating capacity will be 60,000 spectators and it is set to host one of the semi-finals.[7] The Italian industrial group Salini Impregilo was contracted to oversee the stadium's construction operations for a fee of QR 3.1 billion.[8]

The city is currently served by Al Khor General Hospital, which is under the auspices of Hamad Medical Corporation. It has a bed capacity of 115 and was opened in 2005. Health services provided by the hospital include general medical care, general surgery, obstetrics, pediatrics and neonatal care.[9] There are also a number of health centers, one of the largest being Al Khor Community Medical Centre.[10]

Ashghal (Public Works Authority) announced their intent to open a hospital with a bed capacity of 500 at a cost of QR 3.6 billion by 2017. Also included in the plan was a modern health center.[6] 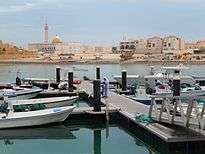 In 1952, the city witnessed the opening of the first formal school outside of the capital Doha.[11] The city's first public library was opened in 1977.[12]

Al Khor International School is the main school in Al Khor, accommodating 4,000 students of families employed by RasGas and Qatargas. In 2015, a government-sanctioned plan saw the allocation of QR 200 million towards building new schools with a planned completion date of late 2016.[6]

Families of RasGas and Qatargas are provided with accommodation in Al Khor Housing Community, one of the most sizable residential complexes in the country. An investment of over QR 2 billion has been afforded on the complex over the years by Alaqaria, a subsidiary of Barwa Group.[13] 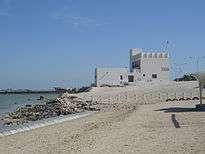 Attractions in Al Khor include Al-Sultan beach hotel & resort, a palace that turned into a hotel, and its large concentrations of modern and historical mosques. The main industry of the city is fishing. There are several beaches surrounding Al Khor, and the beaches south of it are home to many beach houses owned by both residents of the city and residents of Doha.

The city has one of the largest parks in Qatar with an area of 240,000 sq m. Starting in June 2010, the government has invested QR 250 million in refurbishing the park.[16] This has resulted in the development of new facilities in the park such as a mini-golf course, a railway station and a museum.[17]

Al Khor Island (commonly known as Purple Island) is located near the city. Considered to be a domestic ecoturism destination, the island is connected to Al Khor by a tapered dirt path which runs through a number of streams.[18]

A fenced-off beach known as Al Khor Family Beach provides a recreational space for families. It is situated on the Farkeeh Coast and accommodates bathrooms, a playground and a concession stand.[19]

Three historic watchtowers remain near Al Khor's shoreline, having been built in the late 19th century to early 20th century. Their primary purposes were to provide a vantage point and to scout for potential attacks. The three towers, each cylindrical in shape, have walls that are 60 cm thick and diameters of approximately 4 m each.[20]

Comprising two houses adjacent to a marketplace, the Al Ansari Property is situated in the central part of Al Khor. It was constructed around 1930 for members of the Al Ansari family, whom also owned the neighboring Al Khor Souq, which dates back to 1910. The houses underwent several expansions after their construction in order to lodge more family members.[21] 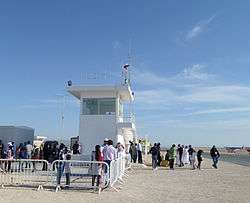 Al Khor and Ras Laffan are connected through Al Huwailah Link Road. In November 2014, the 16-km road was ameliorated by increasing it from one lane to four lanes.[22] A project launched by Ashghal (Public Works Authority) called the "New Orbital Highway and Truck Route" is planned to link Al Khor with the south-eastern coastal city of Mesaieed.[23]

Aviation traffic is controlled by Al Khor Airport. The airport is mostly used by general aviation aircraft and has served as the venue of the annual Al Khor Fly-In since 2008. The fly-in lasts for two days and allows visitors to travel in and spectate aircraft. Aircraft from other GCC countries are showcased at the event.[24]

The following table shows the population of Al Khor.[1][25]