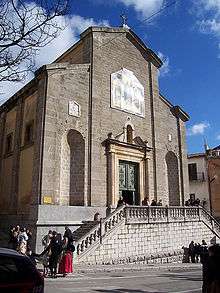 Piana degli Albanesi Cathedral is in a Sicilian Arbëreshë town

The Albani were an aristocratic Roman family, members of which attained the highest dignities in the Roman Catholic Church, one, Clement XI, having been Pope. They were ethnic Albanians who originally moved to Urbino from the region of Malësi e Madhe in Albania.[1] and had been soldiers of Scanderbeg against the Ottoman Empire. Though eventually assimilated in their Italian environment, Clement XI's Albanian antecedents were evident in his having commissioned, during his reign as a Pope, the famous Illyricum Sacrum. Today it is one of the main sources of the field of Albanology, with over 5000 pages divided in several volumes written by Daniele Farlati and Dom. Coletti.

There is an Albanian community in southern Italy, known as Arbëreshë, who had settled in the country in the 15th and the 16th century, displaced by the changes brought about by the expansion of the Ottoman Empire. Some managed to escape and were offered refuge from the repression by the Kingdom of Naples and Kingdom of Sicily (both under Aragonese rule), where the Arbëreshë were given their own villages and protected.[2] The Arbëreshë were estimated as numbering at a quarter million in the 1976.[3]

After the breakdown of the communist regime in Albania in 1990, Italy had been the main immigration target for Albanians leaving their country. This was because Italy had been a symbol of the West for many Albanians during the communist period, because of its geographic proximity. Italy reacted to the migration pressure by introducing the "Martelli" law, stipulating that any immigrant who could prove that he or she had come into the country before the end of 1989 be granted a two-year residency permit. From March 1997, Italy instituted a strict patrol of the Adriatic in an attempt to curb Albanian immigration. As a result, many Albanian immigrants in Italy do not have a legal status. Out of an estimated 450,000 Albanian immigrants in Italy in 1998, only some 82,000 were registered with authorities. In total there are 800,000 Albanians in Italy.[4]

The Italian Government has housed significant numbers of Albanians from Kosovo in the Arbëresh settlements, most notably in Piana degli Albanesi in Sicily.