The Allahabad pillar is an Ashoka Stambha, one of the pillars of Ashoka, an emperor of the Maurya dynasty who reigned in the 3rd century BCE. While it is one of the few extant pillars that carry his edicts,[2]:3 it is particularly notable for containing later inscriptions attributed to the Gupta emperor, Samudragupta (4th century CE).[3] Also engraved on the stone are inscriptions by the Mughal emperor, Jahangir, from the 17th century.[2]

At some point of time, the pillar was moved from its original location and installed within Akbar's Allahabad Fort in Allahabad, Uttar Pradesh. As the fort is now occupied by the Indian Army, the public are only allowed limited access to the premises and special permission is required to view the pillar.[4][5]

Frieze of the lost capital of the Allahabad pillar, with two lotuses framing a "flame palmette" surrounded by small rosette flowers.

A quite similar frieze from Delphi incorporating lotuses with multiple calyxes.

The Allahabad Pillar is a single shaft of polished sandstone standing 35 feet (10.7 m) high. It has a lower diameter of 35 inches (0.9 m) and an upper diameter of 26 inches (0.7 m). The customary lotiform bell-shaped capital seen in the other Ashoka Pillars is lost as is whichever statue mounted it. However the abacus, adorned by a graceful scroll of alternate lotus and honeysuckle, that the statue must have rested upon, was found nearby. Cunningham believed that the capital must have been mounted by a single lion.[2][6] The abacus is almost identical to the one found on the pillar at Sankasya suggesting proximate erection dates.[6] 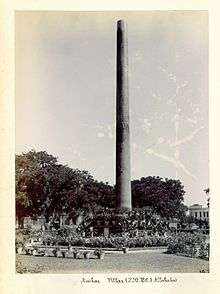 The Ashokan inscriptions suggest that the pillar was first erected at Kaushambi, an ancient town some 30 kilometres west of its current location which was then the capital of the kingdom of Koshala. It was moved to Allahabad much later when the region came under Muslim rule.[1][2] The presence of another broken pillar at Kaushambi near the ruins of the Ghoshitarama monastery[7] has led some to believe that the Allahabad Pillar might have been one of a pair, not unlike the ones discovered at Rampurva.[6] 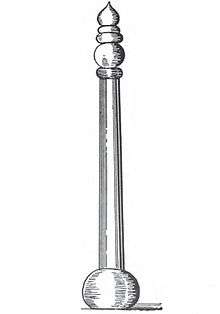 The pillar has been taken down and re-erected a number of times since the 13th century and the "idol-breaking zeal of the Musalmans".[8]:968 It was once re-erected during the time of Jahangir in 1605,[2] albeit crowned by a globe surmounted by a cone, and was later sketched by the Jesuit missionary, Joseph Tiefenthaler, in the mid-18th century.[1] In 1838, Captain Edward Smith "of the Engineers" set up the pillar once again, this time with a new lion capital of his own design. Cunningham dismissed this effort at restoration as "a signal failure" as he thought the statue was "small and recumbent". He summed up the design with the following remark,[1]

Indeed, it looks to me not unlike a stuffed poodle stuck on the top of an inverted flower pot.

When James Prinsep of the Asiatic Society came across the broken pillar just inside the gates of the Allahabad Fort in c. 1834, its inscriptions were being eroded by the rain and sun. He remarked,[9][10]

I could not see the highly curious column lying at Allahabad, falling to rapid decay, without wishing to preserve a complete copy of its several inscriptions …

There are three sets of inscriptions on the column from the three emperors, Ashoka Maurya, Samudragupta, and Jahangir. They are accompanied by some minor inscriptions by pilgrims and others, which are derided as a mass of modern scribblings by Cunningham. Some of these are, however, dated and coupled with the style of scripts used, are useful to establish the periods when the pillar was in an erect position, and when it was lying prone on the ground. An analysis by Prinsep and later by Cunningham indicated that the Allahabad Pillar was very likely erect from the time of Samudragupta until the mid-13th century CE.[3] 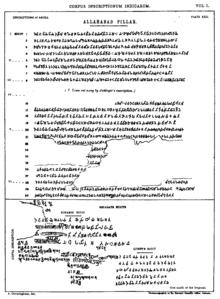 The Ashokan inscriptions on the Allahabad Pillar (along with inscriptions elsewhere) was pivotal to the decipherment of the Brahmi script by The Asiatic Society's James Prinsep. It led to the rediscovery of the Mauryan emperor and the unearthing of the full extent of his empire.[8][11][12]

The inscription is engraved in continuous lines around the column in Brahmi and contains the same six edicts that can be seen on the other pillars. However, much of the third and fourth edicts have been "ruthlessly destroyed by the cutting of the vain-glorious inscription of Jahangir, recording the names of his ancestors".[2] Besides the six edicts, the Allahabad pillar also includes what are known as the Schism edict and the Queen's edict.[2]

The Schism Edict, referred to as the Kaushambi edict by Cunningham, is a command from the emperor addressing the senior officials (Mahamatras) of Kaushambi[1] urging them to avoid dissension and stay united. The following is a conflation of various fragmented versions of the edict:

The Beloved of the Gods orders the officers of Kauśāmbī/Pāṭa[liputra] thus:

No one is to cause dissention in the Order. The Order of monks and nuns has been united, and this unity should last for as long as my sons and great grandsons, and the moon and the sun. Whoever creates a schism in the Order, whether monk or nun, is to be dressed in white garments, and to be put in a place not inhabited by monks or nuns. For it is my wish that the Order should remain united and endure for long. This is to be made known to the Order of monks and the Order of nuns. Thus says the Beloved of the Gods: You must keep one copy of this document and place it in your meeting hall, and give one copy to the laity. The laymen must come on every uposatha day [day of confession and penance] to endorse this order. The same applies to special officers who must also regularly attend the uposatha, and endorse this order, and make it known. Throughout your district you must circulate it exactly according to this text. You must also have this precise text circulated in all the fortress districts [under military control].[13]

The Queen's Edict refers to the charitable deeds of Ashoka's queen, Karuvaki, the mother of Prince Tivala.[14][15]

On the order of the Beloved of the Gods, the officers everywhere are to be instructed that whatever may be the gift of the second queen, whether a mango-grove, a monastery, an institution for dispensing charity or any other donation, it is to be counted to the credit of that queen … the second queen, the mother of Tīvala, Kāruvākī.[13]

A later inscription, attributed to the 4th century CE Gupta emperor, Samudragupta, follows immediately below the edicts of Ashoka. It is considered "the most important historical document of the classical Gupta age".[3] It is in excellent Sanskrit,[3] written in the more refined Gupta script (a later version of Brahmi) by the poet and minister, Harishena.[16] The inscription is a panegyric praising Samudragupta and lists the political and military achievements of his reign including his expeditions to the south.[3][17] It provides a unique snapshot of the Gupta empire and its neighbours and is the source of much of what is known of the geopolitical landscape of that era.[3][16]

The following is from the translation of the inscription by D. R. Bhandarkar:[3][18][19] 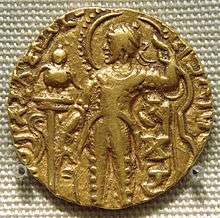 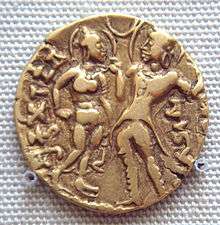 A Samudragupta coin depicting his parents who are mentioned in the inscriptions.

Earlier translations, including one by J. F. Fleet,[20] also exist.

A still later inscription in Persian traces the ancestry of the Mughal emperor Jahangir. It was carved by his favourite calligrapher, Mir Abdullah Mushkin Qalam, shortly before his accession to the throne when he was still Shah Salim.[21] However, much to the dismay of both Prinsep and Cunningham, the Jahangir inscription overwrites the much older Ashoka inscription.[2][10]

The Mughal-era inscription also records an earlier visit in c. 1575 of Akbar's courtier, Birbal, on a pilgrimage to the Sangam, the confluence of the Ganga, Yamuna, and Sarasvati rivers, which is very close to the Allahabad Fort.[1]:698[2]