The Gupta script (sometimes referred to as Gupta Brahmi Script or Late Brahmi Script[1] was used for writing Sanskrit and is associated with the Gupta Empire of India which was a period of material prosperity and great religious and scientific developments. The Gupta script was descended from Brahmi and gave rise to the Nāgarī, Sharada and Siddham scripts. These scripts in turn gave rise to many of the most important scripts of India, including Devanagari (the most common script used for writing Sanskrit since the 19th century), the Gurmukhi script for Punjabi Language, the Assamese script, the Bengali script, and the Tibetan script. 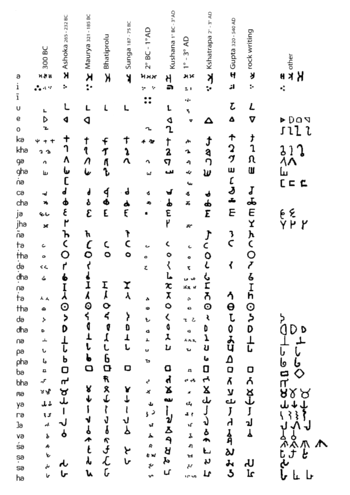 Brahmi and its descendent scripts.

The Gupta Script was descended from the Ashokan Brahmi script, and is a crucial link between Brahmi and most other scripts in the Brahmic family of Scripts, a family of alphasyllabaries or abugidas. This means that while only consonantal phonemes have distinct symbols, vowels are marked by diacritics, with /a/ being the implied pronunciation when the diacritic is not present. In fact, the Gupta script works in exactly the same manner as its predecessor and successors, and only the shapes and forms of the graphemes and diacritics are different.

Through the 4th century, letters began to take more cursive and symmetric forms, as a result of the desire to write more quickly and aesthetically. This also meant that the script became more differentiated throughout the Empire, with regional variations which have been broadly classified into three, four or five categories;[2][3] however, a definitive classification is not clear, because even on a single inscription, there may be variation in how a particular symbol is written. In this sense, the term Gupta script should be taken to mean any form of writing derived from the Gupta period, even though there may be a lack of uniformity in the scripts.

The surviving inscriptions of the Gupta script are mostly found on iron or stone pillars, and on gold coins from the Gupta Dynasty. One of the most important was the Allahabad Prasasti. Composed by Harishena, the court poet and minister of Samudragupta, it describes Samudragupta’s reign, beginning from his accession to the throne as the second king of the Gupta Dynasty and including his conquest of other kings.

The study of Gupta coins began with the discovery of a hoard of gold coins in 1783. Many other such hoards have since been discovered, the most important being the Bayana ( situated in Bharatpur district of Rajasthan) hoard, discovered in 1946, which contained more than 2000 gold coins issued by the Gupta Kings.[4] Many of the Gupta Empire’s coins bear inscriptions of legends or mark historic events. In fact, it was one of the first Indian Empires to do so, probably as a result of its unprecedented prosperity.[2] Almost every Gupta king issued coins, beginning with its first king, Chandragupta I.

The scripts on the coin are also of a different nature compared to scripts on pillars, due to conservatism regarding the coins that were to be accepted as currency, which would have prevented regional variations in the script from manifesting on the coinage.[2] Moreover, space was more limited especially on their silver coins, and thus many of the symbols are truncated or stunted. An example is the symbol for /ta/ and /na/, which were often simplified to vertical strokes. 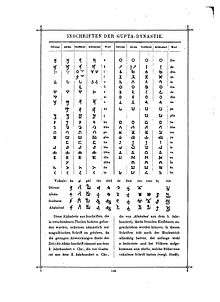