The American Bible Society (ABS) is an interconfessional, non-denominational, nonprofit organization, founded on May 11, 1816 in New York City, which publishes, distributes and translates the Bible and provides study aids and other tools to help people engage with the Bible. It is probably best known for its Good News Translation of the Bible, with its contemporary vernacular. They also publish the Contemporary English Version. The American Bible Society is also a member of the Forum of Bible Agencies International.

The government of the Society is entrusted to a board of managers, one-fourth of whom retire from office each year, but are eligible for reelection. The number of Trustees is determined from time to time by resolution of the Board, but shall not be less than 18 nor more than 24, including the President. There are currently 20 members of the Board of Trustees. Laymen who were constituted directors for life before 1 June 1877, and ministers who are life members are authorized to attend the meetings of the board, with power to speak and vote.[2]

The American Bible Society was founded in 1816 by people who were committed to the word of God and to the end of slavery. The first President was Elias Boudinot, who had been President of the Continental Congress from 1782 to 1783. John Jay, the first Chief Justice of the U.S. Supreme Court, was named President in 1821 and a number of illustrious individuals like Frederick Theodore Frelinghuysen, Johns Hopkins University President Daniel Coit Gilman and Edwin Francis Hyde, a former president of the Philharmonic Society of New York, headed up the organization over the years. Francis Scott Key, the writer of the United States' National Anthem, was a Vice President of the organization from 1817 until his death in 1843. The Society's first headquarters were on Nassau Street in Lower Manhattan.[3]

In 1852, while Theodore Frelinghuysen was President of the Society, the Bible House was built, occupying the whole of the ground bounded by Third and Fourth Avenues, Astor Place and Ninth Street in New York City.[3] By 1920, it was one of the oldest office buildings in the city.[2] One goal of the Bible Society is to reach the destitute of all classes and conditions. During the 19th century, four canvasses of the United States for this purpose were undertaken. These canvasses were begun in 1829, 1856, 1866 and in 1882. During the fourth canvass, begun in 1882, more than 6,300,000 families were visited, and 473,806 families were supplied with Bibles; in addition nearly 300,000 individuals received Bibles.[2] American Bible Society sold 437,000 Scriptures and portions in 1898 in China.[5]

By 1912, the Society issued Bibles for use in the United States in 83 languages besides English. Foreign circulation was rising steadily, increasing from 250,000 copies in 1876 to over 2,000,000 copies in 1915.[2] Although the Society continues to publish Bibles, it ceased printing them in 1922.[3] The American Bible Society celebrated a century of service to China in 1934. Vice President John R. Mott recalled that in 1833 the Society sent $3,000 to Dr. Elijah Coleman Bridgman, first U. S. Protestant missionary to China, to print scriptures in Chinese. As of 1934 the Society had spent $2,897,383 distributing nearly 70,000,000 volumes of Scripture in China. A major supporter of the society was the philanthropist, oilman, and rancher Joseph Sterling Bridwell of Wichita Falls, Texas.[6]

In 1999, ABS launched its first major internet ministry, ForMinistry.com, a free church web-builder. Operations ceased in 2013 after 14 years of serving over 180,000 churches and ministries.[7] 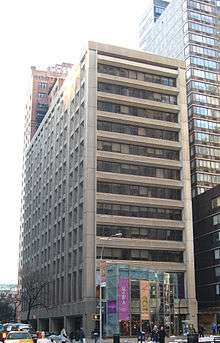 In recent years, the Society has struggled.[8] From 2002 to 2011, the Society overspent its budget by US$250 million and from 2005 until 2014, it has had five different presidents.[8] Some of the problems began when Paul Irwin was hired as president in 2005 despite questions about his financial management while he ran that Humane Society of the United States.[8] In 2012, Ministry Watch raised questions of the Society's fundraising practices when it found the Society spent 30% of its budget on fundraising expenses, “an amazing five times the average fundraising cost ratio of ministries covered in the MinistryWatch.com database.”[8] Staff salaries – in 2011 totaling $29 million for 220 employees, an average of $130,000 per employee, with at least 10 senior staffers making more than $200,000 – also raised questions for the New York City-based organization.[8] In 2014, the Society hired Roy Peterson as president following the firing of Doug Birdsall, whom it hired just a few months previously in October 2013.[9]

In the aftermath of the September 11 attacks, ABS distributed more than one million Scriptures and offered downloadable portions free of charge to those affected by the tragedy. It has also maintained its commitment to military, including producing a pocket-sized military Bible, developed jointly with the aid of Catholic and Protestant chaplains from all branches of the armed forces. It has also provided Scriptures to victims of natural disasters.

Following the tsunami in 2004, ABS worked in cooperation with the United Bible Societies and partner Bible Societies in Thailand, Indonesia, India and Sri Lanka to provide a host of Bible resources to people in the affected regions. In 2005, it sent nearly a million Bibles and Scripture portions to those who survived the devastation of Hurricane Katrina. ABS has formed a partnership with Habitat for Humanity to give a free Bible to each of its new homeowners in the United States.

In 2010, ABS launched a new Bible Search tool, an ad-free web engine that searches across ten translations of the Bible and targets the "Bible curious" and Protestant, Catholic and Orthodox believers.

In 2014, ABS contracted with ICANN to operate the .BIBLE TLD Registry. The availability of .BIBLE domain names will accelerate global online Bible engagement.[10] The first site to launch was American.Bible in September 2015, which makes the message of the Bible accessible to people in a way that fits their digital lives.[11]

In 2015, the Society announced that it had sold 1865 Broadway for US$300 million and was moving to a new location in Philadelphia, leasing 100,000 square feet at 401 Market Street.[1] This comes at a time when the Society has been trying to reinvent itself after a decade of turmoil.[9]

They have proposed creating a Bible Discovery Center on the first floor of their new location in 2016, with easy access to Independence Mall, where Independence Hall is located, the site of the signing of both the American Declaration of Independence and the United States Constitution.[1]

The Museum of Biblical Art, an independent but affiliated organization which had been housed within the building at 1865 Broadway, will remain in New York City.[12]

Housed at ABS’s main headquarters is a library that houses the largest collection of Bibles in the Western Hemisphere and a number of interesting and valuable editions of ancient and historic bibles dating back as far as the Gutenberg edition, of which ABS has several pages under protection. The collection contains editions of scripture in every language, from many countries and regions and spanning nearly six centuries and is the second largest collection of religious books, with the Vatican the largest. ABS often finds and protects found scriptures, sometimes even buying them at auction. The Museum is open to the public.

In ABS’s Bible repository in South America, there are hundreds of thousands of random versions and editions of Bibles that it has collected over the years.

In 2014, before the US$300 million sale of its New York City headquarters building, the Society had total assets of $528 million, total revenue of $51 million and operating expenses of $83 million.[1]