The university is ranked as the number one university in Lebanon and among the top 250 universities in the world by the QS World University Rankings.[4] 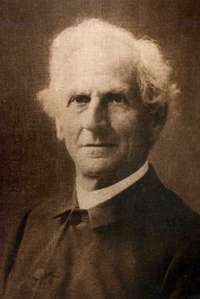 At the Main Gate

On 23 January 1862, W.M. Thomson proposed to a meeting of the American Board of Commissioners for Foreign Missions that a college of higher learning, that would include medical training, should be established in Beirut with Daniel Bliss as its President.[7] On April 24, 1863, while Dr. Daniel Bliss was raising money for the new college in the United States and England, the State of New York granted a charter for the Syrian Protestant College. The college, which was renamed the American University of Beirut[3] in 1920, opened with a class of 16 students on December 3, 1866. Dr. Bliss served as its first president, from 1866 until 1902.[8]

AUB alumni have had a broad and significant impact on the region and the world for many years. For example, 19 AUB alumni were delegates to the signing of the United Nations Charter in 1945—more than any other university in the world. AUB graduates continue to serve in leadership positions as presidents of their countries, prime ministers, members of parliament, ambassadors, governors of central banks, presidents and deans of colleges and universities, leading academics, businesspeople, scientists, engineers, doctors, teachers, and nurses. They work in governments, the private sector, and in nongovernmental organizations.

During the Lebanese Civil War (1975–1990) AUB pursued various means to preserve the continuity of studies, including enrollment agreements with universities in the United States.

On March 21, 2008, the Board of Trustees selected Peter Dorman to be AUB's 15th president. He succeeded John Waterbury who was president of AUB from 1998 to 2008. Dorman is an international scholar in the field of Egyptology and formerly chaired the University of Chicago's Department of Near Eastern Languages and Civilizations.

On March 19, 2015, the Board of Trustees formally approved the nomination of Fadlo R. Khuri, MD, as the next president. He was officially appointed as AUB's 16th president after holding an inauguration ceremony on Monday February 25, 2016.[9] 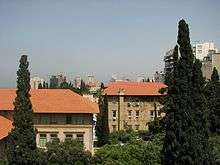 Part of the upper campus as seen from Penrose dormitory

The 61-acre (250,000 m2) American University of Beirut campus is on a hill overlooking the Mediterranean Sea on one side and bordering Bliss Street on the other. Based in one of Lebanon’s few geographic locations, AUB’s campus in Ras Beirut consists of 64 buildings, seven dormitories and several libraries. In addition, the university also houses the Charles W. Hostler Student Center, an Archaeological Museum as well as the widely renowned Natural History Museum. Students also benefit from a range of recreational and research facilities, such as the 247 acre research farm and educational complex hosted by the Faculty of Agricultural and Food Sciences' AREC (Agricultural Research and Education Center) in Beqaa, Lebanon.[10]

During the fall of the academic year 2013-2014, the American University of Beirut had 8,315 registered students:

In 2007, the American University of Beirut reintroduced PhD programs. Currently, it offers doctoral programs in the following programs:[13] 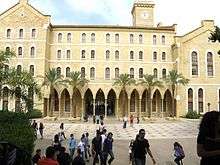 Research in the American University of Beirut is also carried by 28 centers and institute in a variety of fields.[14]

The AUB Medical Center (AUBMC) is the private, not-for-profit teaching center of the Faculty of Medicine.[12] The AUB Medical Center (AUBMC), which is accredited by the Joint Commission International (JCIA) on hospital accreditation, includes a 420-bed hospital and offers comprehensive tertiary/quaternary medical care and referral services in a wide range of specialties and medical, nursing and paramedical training programs at undergraduate and post-graduate level. Since 1905, AUB’s medical services have included a nursing school. In 2008, the American Association of Colleges of Nursing (AACN) invited AUB’s Rafic Hariri School of Nursing to become a full member, making it the first member of the AACN outside the United States. The American Nurses Credentialing Center's (ANCC) Magnet Recognition Program awarded AUBMC its prestigious Magnet designation on June 23, 2009. AUBMC is the first healthcare institution in the Middle East and the third in the world outside the United States to receive this award.

On April 4, 2011, the American University of Beirut (AUB) announced an ambitious plan for the development and implementation of a new AUBMC 2020 Medical Complex. The AUBMC 2020 Medical Complex will lead to the growth of the hospital from an approximately 350-bed institution to a 600-bed medical complex that will also include new adult and pediatric hospitals, the creation of specialized centers of excellence in oncology, neuroscience, cardiovascular disease, amongst others, as well as an expansion in the existing services and buildings. Another component to AUBMC’s growth, will be the recruitment of top-caliber, highly specialized and accomplished faculty, and the creation of a Heart and Vascular Center and a Multiple Sclerosis Center.[15]

The Archaeological Museum of the American University of Beirut[6] is the third oldest museum in the Near East with displays covering all periods of history. The museum[6] also carries out archaeological research projects. 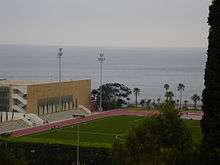 The University Libraries are home to a rich collection that consists of:

The Saab Medical Library (SML) serves the AUB Faculty of Medicine[11][12] and Medical Center, Faculty of Health Sciences,[11] the Rafic Hariri School of Nursing, in addition to the entire AUB campus.[18]

Although many library resources are accessible remotely from on and off campus, the libraries themselves are equipped with e-classrooms, computer labs, and wireless connectivity. Trained and experienced library staff conduct classes and workshops throughout the year to introduce and train users to take advantage of the libraries’ collections, information resources, and innovative technologies. 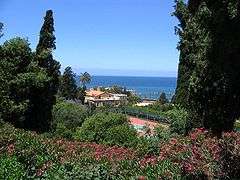 Looking northwest across the campus towards the Mediterranean Sea.

In October 2002, the American University of Beirut launched a five-year $150 million fund raising campaign called the Campaign for Excellence[19] to celebrate its 140th anniversary in 2006–07. The University raised more than $171 million during the campaign, which ended in December 2007, to upgrade its facilities, strengthen academic programs, enhance faculty recruitment, and increase its financial aid budget. In 2014, the American University of Beirut received its largest single donation of $32 million from Jamal Daniel to help the AUBMC 2020 vision.[20]

Degrees awarded by the American University of Beirut[3] are officially registered with the Ministry of Higher Education in Lebanon and with the Board of Education in the State of New York. AUB was granted institutional accreditation in June 2004[21] by the Commission on Higher Education of the Middle States Association of Colleges and Schools. The University’s accreditation was most recently reaffirmed in June 2009.[21] 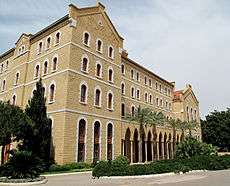 The reconstructed College Hall at AUB

The American University of Beirut (AUB)[3] is governed by an autonomous Board of Trustees consisting of a wide array of high accomplished personnel, most notably:

Nineteen former AUB students were delegates to the signing of the United Nations Charter in 1945,[25] perhaps the most famous among them was Charles Malik, a Lebanese philosopher, diplomat and president of the United Nations General Assembly from 1958 to 1959.[26] The legal advisor to the Lebanese delegation was Sobhi Mahmassani, a legal scholar and public figure who served on the AUB faculty until 1964.[27] Another notable alumni is Omar Al-Saqqaf, who was the former minister of foreign affairs of the Kingdom of Saudi Arabia. Afghan president Ashraf Ghani is an AUB graduate, as is Eliyahu Eilat, a Diplomat, orientalist and ambassador of Israel to the USA.