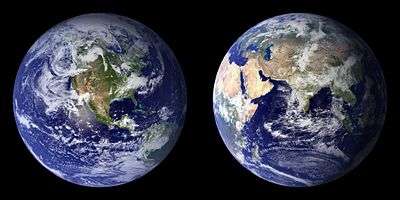 Blue Marble composite images generated by NASA in 2001 (left) and 2002 (right)
Not to be confused with Environmental studies.

Environmental science is an interdisciplinary academic field that integrates physical, biological and information sciences (including ecology, biology, physics, chemistry, zoology, mineralogy, oceanology, limnology, soil science, geology, atmospheric science, and geodesy) to the study of the environment, and the solution of environmental problems. Environmental science emerged from the fields of natural history and medicine during the Enlightenment.[1] Today it provides an integrated, quantitative, and interdisciplinary approach to the study of environmental systems.[2]

The National Center for Education Statistics in the United States defines an academic program in environmental science as follows:

A program that focuses on the application of biological, chemical, and physical principles to the study of the physical environment and the solution of environmental problems, including subjects such as abating or controlling environmental pollution and degradation; the interaction between human society and the natural environment; and natural resources management. Includes instruction in biology, chemistry, physics, geosciences, climatology, statistics, and mathematical modeling.[4]

Atmospheric sciences focus on the Earth's atmosphere, with an emphasis upon its interrelation to other systems. Atmospheric sciences can include studies of meteorology, greenhouse gas phenomena, atmospheric dispersion modeling of airborne contaminants,[5][6] sound propagation phenomena related to noise pollution, and even light pollution.

Taking the example of the global warming phenomena, physicists create computer models of atmospheric circulation and infra-red radiation transmission, chemists examine the inventory of atmospheric chemicals and their reactions, biologists analyze the plant and animal contributions to carbon dioxide fluxes, and specialists such as meteorologists and oceanographers add additional breadth in understanding the atmospheric dynamics. 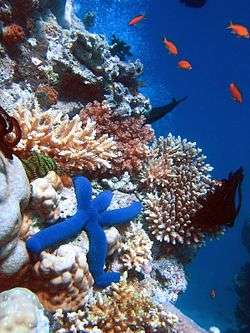 Biodiversity of a coral reef. Corals adapt and modify their environment by forming calcium carbonate skeletons. This provides growing conditions for future generations and forms a habitat for many other species.

Ecology is the study of the interactions between organisms and their environment. Ecologists might investigate the relationship between a population of organisms and some physical characteristic of their environment, such as concentration of a chemical; or they might investigate the interaction between two populations of different organisms through some symbiotic or competitive relationship.

For example, an interdisciplinary analysis of an ecological system which is being impacted by one or more stressors might include several related environmental science fields. In an estuarine setting where a proposed industrial development could impact certain species by water and air pollution, biologists would describe the flora and fauna, chemists would analyze the transport of water pollutants to the marsh, physicists would calculate air pollution emissions and geologists would assist in understanding the marsh soils and bay muds.

Environmental chemistry is the study of chemical alterations in the environment. Principal areas of study include soil contamination and water pollution. The topics of analysis include chemical degradation in the environment, multi-phase transport of chemicals (for example, evaporation of a solvent containing lake to yield solvent as an air pollutant), and chemical effects upon biota.

As an example study, consider the case of a leaking solvent tank which has entered the habitat soil of an endangered species of amphibian. As a method to resolve or understand the extent of soil contamination and subsurface transport of solvent, a computer model would be implemented. Chemists would then characterize the molecular bonding of the solvent to the specific soil type, and biologists would study the impacts upon soil arthropods, plants, and ultimately pond-dwelling organisms that are the food of the endangered amphibian.

Geosciences include environmental geology, environmental soil science, volcanic phenomena and evolution of the Earth's crust. In some classification systems this can also include hydrology, including oceanography.

As an example study of soils erosion, calculations would be made of surface runoff by soil scientists. Fluvial geomorphologists would assist in examining sediment transport in overland flow. Physicists would contribute by assessing the changes in light transmission in the receiving waters. Biologists would analyze subsequent impacts to aquatic flora and fauna from increases in water turbidity.

Environmental science examines the effects of humans on nature (Glen Canyon Dam in the U.S.)

In the U.S. the National Environmental Policy Act (NEPA) of 1969 set forth requirements for analysis of major projects in terms of specific environmental criteria. Numerous state laws have echoed these mandates, applying the principles to local-scale actions. The upshot has been an explosion of documentation and study of environmental consequences before the fact of development actions.

One can examine the specifics of environmental science by reading examples of Environmental Impact Statements prepared under NEPA such as: Wastewater treatment expansion options discharging into the San Diego/Tijuana Estuary, Expansion of the San Francisco International Airport, Development of the Houston, Metro Transportation system, Expansion of the metropolitan Boston MBTA transit system, and Construction of Interstate 66 through Arlington, Virginia.

In England and Wales the Environment Agency (EA),[7] formed in 1996, is a public body for protecting and improving the environment and enforces the regulations listed on the communities and local government site.[8] (formerly the office of the deputy prime minister). The agency was set up under the Environment Act 1995 as an independent body and works closely with UK Government to enforce the regulations.