In the Archaic period of Greek history, an amphictyony (Greek: ἀμφικτυονία), a "league of neighbors", or Amphictyonic League was an ancient religious[1] association of Greek tribes[2] formed in the dim past, before the rise of the Greek polis. The six Dorian cities of coastal southwest Asia Minor, or the twelve Ionian cities to the north, a dodecapolis forming an Ionian League emerging in the aftermath of a dimly-remembered "Meliac war" in the mid-7th century BC, were already of considerable antiquity when the first written records emerge.

Thucydides made recollection of the Lelantine War, apparently fought in Euboea sometime between the late 8th century BC and the first half of the 7th century BC:

"The war between Chalcis and Eretria was the one in which most cities belonging to the rest of Greece were divided up into alliances with one side or the other."[3]

Historians have puzzled over the broader meanings of "alliance" in such early times. "But comparatively large-scale associations lead more readily to contacts, to friendships and enmities at a distance than do little city-like units," George Forrest notes,[4] remarking apropos that Phrygia and Assyria were at war with each other about 720–710 BC, raising tensions among interested Greeks.

In historic times, an amphictyony might survive as a form of religious organization enjoined to support specific temples or sacred places; traditional amphictyonies coordinated Olympic and Pythian games. Twelve members would meet at specific times in the same sanctuary to keep religious festivals and conduct other matters as well.

An early amphictyony centered on Kalaureia, an island close to the coast of Troezen in the Peloponnesus sacred to Poseidon, was noted by Strabo. Archaeology of the site suggested to Thomas Kelly that the sacred league was founded in the second quarter of the 7th century BC, c. 680-650;[5] before that date there were virtually no remains at the site, which could not have been used more than sporadically.[6] The island was known at one time as Eirene (Εἰρήνη) ("Peace"), clearly in reference to the amphictyony.[7] Strabo[8] lists the poleis that belonged:

"And there was also a kind of Amphictyonic League connected with this temple, a league of seven cities which shared in the sacrifice; they were Hermione, Epidaurus, Aegina, Athens, Prasïeis, Nauplïeis, and Orchomenus Minyeius;[9] however, the Argives paid dues for the Nauplians,[10] and the Lacedaemonians for the Prasians."[11] 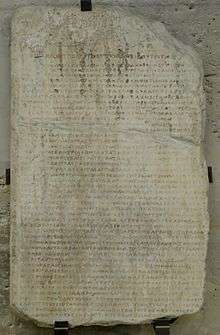 Amphictyonic law of Delphi (4th century BC, marble, from Aegina, now in the Louvre)

Silver stater from Delphi, 336 BC, issued in the name of Amphictyonic Council of Delphi

The least obscure and longest-lasting amphictyony was the Delphic or Great Amphictyonic League that was organized to support the greater temples of Apollo and Demeter. The League council had religious authority and the power to pronounce punishments against offenders. Punishments could range from fines to expulsion and to conduct sacred wars. The Amphictyonic League also set the rules of battle so as to protect sanctuaries and impose sentences on those who molested sanctuaries.

Based on legend, the Great Amphictyonic League was founded somewhat after the Trojan War, for the protection and administration of the temple of Apollo in Delphi and temple of Demeter in Anthele (Ἀνθήλη), near Thermopylae. The founding myth claimed that it had been founded in the most distant past by an eponymous founder Amphictyon, brother of Hellen, the common ancestor of all Hellenes. Representatives of the twelve members (called hieromnemones) met in Thermopylae in spring and in Delphi in autumn.

The oldest religious Amphictyonic League was known as Anthelian, because it was centered on the cult of the chthonic goddess Demeter at Anthela. The twelve delegates were entitled Pylagorai (gate-assemblers), perhaps a reference to the local Gates of Hades, since Demeter was a chthonic goddess in her older local cults. The immediate dwellers-round were some small states and also Achaea-Phthiotis that probably paved the way for the entry of the body of the rest Boeotian tribes which were living around Thessaly (perioikoi). Boeotia and Phocis the remotest may have joined only during or after the "First Sacred War", which led to the defeat of the old priesthood and to a new control of the prosperity of the oracle at Delphi.[13]

As a result of the war the Anthelan body was known thenceforth as the Delphic Amphictyony and became the official overseer and military defender of the Delphic cult. A strange and revealing anti-Thessalian feeling appeared and a wall was built across the narrow defile at Thermopylae to keep the Thessalians out.

It has been suggested that the Shield of Heracles may reflect anti-Thessalian feeling after the First Sacred War: in this epic, a Thessalian hero interfering with the Phocian sanctuary is killed by a Boeotian hero (Heracles), whose mortal father Amphitryon had for allies Locrians and Phocians. This was a pastiche made to be sung at a Boeotian festival at midsummer at the hottest time of the dogstar Sirios.[14]

The name Hellenes, may be related to the members of the league and may have been broadened to refer to all Greeks when the myth of their patriarch Hellen was invented. In Greek mythology Amphictyon was brother of Hellen, and Graecus was son of his sister Pandora. According to the Parian Chronicle, the previously-named Graeces were renamed Hellenes.[15]

Originally a religious organization, the Amphictyonic League became politically important in the 6th century BC, when larger city-states began to use it to apply pressure to the lesser ones.

The Oracle managed to become independent from the city of Krissa, to which the temple originally belonged to. The people of Krissa then imposed a tax on those who were passing through their area to go to Delphi, causing strong complaints and reducing the resources of the Oracle. The Amphictyony, having exhausted all other means to peacefully resolve the crisis, declared the First Sacred War (or Cirrhean War)[16] against Krissa that lasted a decade, from 596 to 585 BC. The result was the destruction of Krissa and the dedication of this country to Apollo, Leto, Artemis, and Athena Pronaia. After this, the Pythian Games were held every four years, under the direction of the Amphictyons.

In 449-448 BC the Phocians, wanting to become masters of the sanctuary, marched against Delphi, but the Spartans sent an army and restored things, thus causing the second Sacred War. After the Spartans’ departure, the Athenians, led by Pericles, gave back to the Phocians the rule of Delphi and the management of the Pythian Games. In 421 BC, after the Peace of Nicias, Delphi became autonomous again. (It is unlikely, however, that Phocis remained in control of Delphi after Sparta defeated Athens at the Battle of Coronea (447 BC).[17]

In 356 BC the Phocians under Philomelos captured and sacked Delphi and another sacred war was declared against them. After a ten-year war the Phocians were expelled from the League in 346 BC and their two votes were given to Macedonians who had helped to defeat them. Philip II of Macedonia used this power to further his expansionist policy in Greece. This ended up in the Fourth Sacred War which culminated in the Battle of Chaeronea (338 BC), marking the final domination of the Macedonians over Greece.

In 279 BC the Delphic Amphictyony admitted as new members the Aetolians, who had successfully defended the sanctuary as well as the rest of mainland Greece against the Gauls. At this instance the Phocians were also readmitted for having also participated at the defense of the region. In the 3rd century BC the Soteria (festival) was held in honour of the Greek victory against the Gauls. By 191 BC the League had 17 members but only the most dominant one had the two votes, when others had only one. The league continued to exist under the Roman Empire but its authority was limited to the care of the temple of Apollo at Delphi. The Roman emperor Augustus incorporated the Aenianes, Malians, Magnetians and Pythians with the Thessalians. Since the Dolopes had meanwhile vanished, he gave their vote to the city of Nicopolis.

The Congress of Panama, organized by Simón Bolívar in 1826 with the goal of bringing together the new republics of Latin America in a permanent alliance, was often referred to as The Amphictyonic Congress, in homage to the above.