For other uses, see Sanctuary (disambiguation). 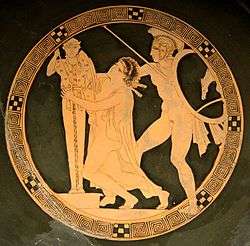 A sanctuary, in its original meaning, is a sacred place, such as a shrine. By the use of such places as a haven, by extension the term has come to be used for any place of safety. This secondary use can be categorized into human sanctuary, a safe place for humans, such as a political sanctuary; and non-human sanctuary, such as an animal or plant sanctuary.

Sanctuary is a word derived from the Latin sanctuarium, which is like most words ending in -arium, a container for keeping something in—in this case holy things or perhaps holy people, sancta or sancti. The meaning was extended to places of holiness or safety. A religious sanctuary may be a sacred place (such as a church, temple, synagogue or mosque), or a consecrated area of a church or temple around its tabernacle or altar. 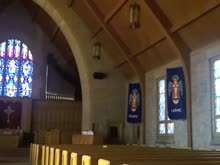 Sanctuary as a sacred place

In Europe, Christian churches were sometimes built on land considered to be a particularly holy spot, perhaps where a miracle or martyrdom was believed to have taken place or where a holy person was buried. Examples are St. Peter's Basilica in Rome and St. Albans Cathedral in England, which commemorate the martyrdom of Saint Peter (the first Pope) and Saint Alban (the first Christian martyr in Britain), respectively. The place, and therefore the church built there, was considered to have been sanctified (made holy) by what happened there. In modern times, the Catholic Church has continued this practice by placing in the altar of each church, when it is consecrated for use, a box (the sepulcrum) containing relics of a saint. The relics box is removed when the church is taken out of use as a church. In the Eastern Orthodox Church, the antimension on the altar serves a similar function. It is a cloth icon of Christ's body taken down from the cross, and typically has the relics of a saint sewn into it. In addition, it is signed by the parish's bishop, and represents his authorization and blessing for the Eucharist to be celebrated on that altar.

Sanctuary as an altar 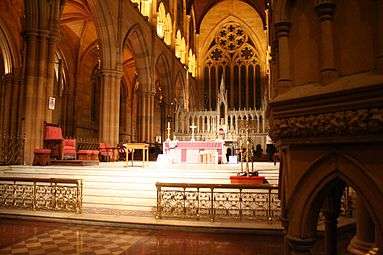 In many Western Christian traditions including Roman Catholic, Lutheran, Methodist, and Anglican churches, the area around the altar is called the sanctuary; it is also considered holy because of the physical presence of God in the Eucharist, both during the Mass and in the tabernacle on the altar the rest of the time.

In many Western traditions altar rails sometimes mark the edge of the sanctuary or chancel. In many churches the architectural term chancel covers the same area as the sanctuary, and either term may be used.[1] In some Protestant churches, the term sanctuary denotes the entire worship area while the term chancel is used to refer to the area around the altar-table.

In the Eastern Orthodox Church, Eastern Catholic Churches of Syro-Malabar Church, Byzantine rite and Coptic Orthodox Churches, the sanctuary is separated from the nave (where the people pray) by an iconostasis, literally a wall of icons, with three doors in it. In other Oriental Orthodox traditions, a sanctuary curtain is used. 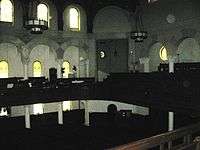 The back of the church sanctuary at Church of St. Paul and St. Andrew.

The area around the altar came to be called the "sanctuary", and that terminology does not apply to Christian churches alone: King Solomon's temple, built in about 950 BC, had a sanctuary ("Holy of Holies") where the Ark of the Covenant was, and the term applies to the corresponding part of any house of worship. In most modern synagogues, the main room for prayer is known as the sanctuary, to contrast it with smaller rooms dedicated to various other services and functions. (There is a raised bimah in the sanctuary, from which services are conducted, which is where the ark holding the Torah may reside; some synagogues, however, have a separate bimah and ark-platform.)

When referring to prosecution of crimes, sanctuary can mean one of the following:

The Church as a Place of Refuge

A sacred place, such as a church, in which fugitives formerly were immune to arrest (recognized by English law from the fourth to the seventeenth century).[2] While the practice of churches offering sanctuary is still observed in the modern era, it no longer has any legal effect and is respected solely for the sake of tradition.
Political sanctuary
Immunity to arrest afforded by a sovereign authority. The United Nations has expanded the definition of "political" to include race, nationality, religion, political opinions and membership and/or participation in any particular social group or social activities. People seeking political sanctuary typically do so by asking a sovereign authority for asylum. 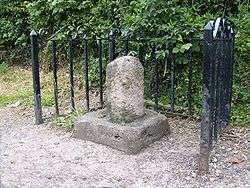 Many ancient peoples recognized a religious right of asylum, protecting criminals (or those accused of crime) from legal action and from exile to some extent. This principle was adopted by the early Christian church, and various rules developed for what the person had to do to qualify for protection and just how much protection it was.

In England, King Æthelberht made the first laws regulating sanctuary in about AD 600, though Geoffrey of Monmouth in his Historia Regum Britanniae (c. 1136) says that the legendary pre-Saxon king Dunvallo Molmutius (4th/5th century BC) enacted sanctuary laws in the Molmutine Laws as recorded by Gildas (c. 500–570).[3] By Norman times, there had come to be two kinds of sanctuary: All churches had the lower-level kind, but only the churches the king licensed had the broader version. The medieval system of asylum was finally abolished entirely in England by James I in 1623.[4]

During the Wars of the Roses of the 15th century when the Lancastrians or Yorkists would suddenly gain the upper hand by winning a battle, some adherents of the losing side might find themselves surrounded by adherents of the winning side and unable to return to their own side, so they would rush to sanctuary at the nearest church until it was safe to leave it. A prime example is Queen Elizabeth Woodville, consort of Edward IV of England.

In 1470, when the Lancastrians briefly restored Henry VI to the throne, Edward's queen was living in London with several young daughters. She moved with them into Westminster for sanctuary, living there in royal comfort until Edward was restored to the throne in 1471 and giving birth to their first son Edward during that time. When King Edward IV died in 1483, Elizabeth (who was highly unpopular with even the Yorkists and probably did need protection) took her five daughters and youngest son (Richard, Duke of York; Prince Edward had his own household by then) and again moved into sanctuary at Westminster. She had all the comforts of home; she brought so much furniture and so many chests that the workmen had to break holes in some of the walls to move everything in fast enough to suit her.

In the 20th century, during World War I, all of Russia's Triple Entente Allies made the controversial decision in 1917 to deny political sanctuary to Tsar Nicholas II and his immediate family when he was overthrown in that year's February Revolution and forced to abdicate in March in favor of Alexander Kerensky's Russian Provisional Government. Nicholas and his family and remaining household were sent to Tobolsk, Siberia that summer. Lenin and his Bolsheviks overthrew Kerensky's government late that year, the Russian Civil War started soon afterwards and in July, 1918, with Lenin losing the civil war, Nicholas and his family were executed on Lenin's orders while confined at the Ipatiev House in Yekaterenburg. In 1939, months before World War II began, more than 900 Jewish refugees from Nazi Germany who were sailing on the MS St. Louis met the same fate, first by Cuba—their original destination—and afterwards by Canada and the United States. As a result, most of them were forced back to Europe, where many of them died in Nazi concentration camps during the war, although the exact numbers of casualties and survivors is still unknown. In the 1980s, alleged Estonian Nazi war criminal, Karl Linnas, was the target of several sanctuary denials outside the United States when he was returned in 1987 to what was Soviet Estonia to face a death penalty for alleged war crimes (see Holocaust trials in Soviet Estonia). Linnas died in a Leningrad prison hospital on July 2, 1987 while waiting for a possible retrial in a Gorbachev era court, about 25 years after Khrushchevian courts convicted him in absentia.

These sites included university campuses and cities. From the 1980s continuing into the 2000s, there also have been instances of churches providing "sanctuary" for short periods to migrants facing deportation in Germany, France, Belgium, the Netherlands, Norway, Switzerland, Australia and Canada, among other nations. In 2007, Iranian refugee Shahla Valadi was granted asylum in Norway after spending seven years in church sanctuary after the initial denial of asylum.[5] From 1983 to 2003 Canada experienced 36 sanctuary incidents.[6] The "New Sanctuary Movement" organization estimates that at least 600,000 people in the United States have at least one family member in danger of deportation.[7] In 2016, an Icelandic church declared that they would harbour two failed asylum seekers who violated the Dublin Regulation, and police removed them for deportation, as ecclesiastical immunity has no legal standing.[8]

When referring to a shelter from danger or hardship, sanctuary can mean one of the following:

The term "sanctuary" has further come to be applied to any space set aside for private use in which others are not supposed to intrude, such as a "man cave".

An animal sanctuary is a facility where animals are brought to live and be protected for the rest of their lives. Unlike animal shelters, sanctuaries do not seek to place animals with individuals or groups, instead maintaining each animal until his or her natural death.

Plant sanctuaries are areas set aside to maintain functioning natural ecosystems, to act as refuges for species and to maintain ecological processes that cannot survive in most intensely managed landscapes and seascapes. Protected areas act as benchmarks against which we understand human interactions with the natural world. Today they are often the only hope we have of stopping many threatened or endemic species from becoming extinct.