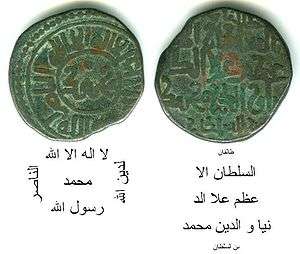 A coin minted in the name of Muhammad II (1200-1220) of Khwarezm, citing caliph an-Nasir as nominal suzerain.

Al-Nasir li-Din Allah (6 August 1158 – 5 October 1225) (Arabic: الناصر لدين الله‎‎) was the 34th Abbasid Caliph in Baghdad from 1180 until his death. His laqab literally means The Victor for the Religion of God. He attempted to restore the caliphate to its ancient dominant role and achieved a surprising amount of success, despite the fact that the caliphate had long been militarily subordinated to other dynasties. He not only held Baghdad (the capital of the Abbasid empire), but extended his dominion into Mesopotamia and Persia. According to the historian, Angelika Hartmann, Al-Nasir was the last effective Abbassid Caliph.[1]

Besides his occasional conquests, he consistently held Iraq from Tikrit to the Persian Gulf without interruption. His long reign of forty-seven years is chiefly marked by ambitious and corrupt dealings with the Tartar chiefs, and by his hazardous invocation of the Mongols, which so soon brought his own dynasty to an end. But in his day, there was comparative peace at Baghdad; learning flourished; while refuges for the poor, and other works of public interest, were encouraged.

Al-Nasir was the son of Caliph Al-Mustadi and a Turkish umm walad called Zumurrud (Emerald).[2] His reign was unusual for the rise of the futuwwa groups in his reign, connected to Baghdad's long-standing ayyarun. These urban social groups had long existed in Baghdad and elsewhere, and they were often involved in urban conflicts, especially sectarian riots. Al-Nasir made them into an instrument of his government, reorganizing them along Sufi lines and ideology.

In the early years of his caliphate, his goal was to crush the Seljuq power and replace it with his own. He incited rebellion against the Seljuq Sultan of Persia, Toghrul III. The Khwarizm Shah, Ala ad-Din Tekish, at his instigation, attacked the Seljuq forces, and defeated them in 1194; Toghrul was killed and his head exposed in the caliph's palace. Tekish, recognized now as supreme ruler of the East, bestowed on the caliph certain provinces of Persia that had been held by the Seljuqs.

Al-Nasir sent his vizier to Tekish with some gifts, but the vizier irritated Tekish, who attacked the caliph's troops and routed them. Thereafter hostile relations prevailed for many years. The Caliph assassinated a governor of Tekish by using an Ismaili emissary. Tekish responded by having the body of al-Nasir's vizier, who died on a campaign against him, exhumed, and the head stuck up at Khwarizm. Irritated at this and other hostile acts, the Caliph retaliated by treating with indignity the pilgrims who came from the East under Khwarizm's flag. But beyond such poor revenge, he was powerless for any open enmity.

Tekish's son, Muhammad II (1200–1220), annoyed at the actions of the caliph, set up a Shi'a Caliph to paralyse al-Nasir's spiritual power. Following up this act, he turned his army on Baghdad. In response, some medieval historians write that al-Nasir appealed to Genghis Khan, the rising Mongol chief, to check Muhammad's progress. This point is controversial, but it is likely that the caliph had some contacts to the non-Muslims Mongols.

The caliph soon found Genghis Khan to be quite threatening. The steppes of Central Asia were set in motion by Genghis Khan, and his hordes put to flight the Khwarizm Shah, who died an exile in an island of the Caspian.

Al-Nasir spent his last three years paralysed and nearly blind. He suffered from dysentery for twenty days and then died.[3]