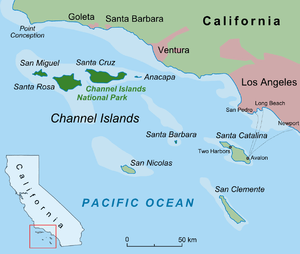 A natural bridge on the east end of the island. 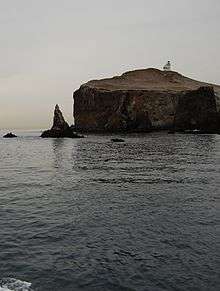 Anacapa's lighthouse is situated on the east end of the island.

Anacapa Island is a small volcanic island located about 11 miles (18 km) off the coast of Port Hueneme, California, in Ventura County. The island is composed of a series of narrow islets 6 mi (10 km) long, oriented generally east-west and 5 mi (8 km) east of Santa Cruz Island. The three main islets, East, Middle and West Anacapa, are collectively known as "The Anacapas" by some authors. All three islets have precipitous cliffs, dropping off steeply into the sea.

Along with Santa Barbara Island, Anacapa was formed by volcanic eruptions between 19 and 15 million years ago.[1][2] These eruptions are believed to have been caused by thinning of ocean crust as the block containing the northern Channel Islands and Santa Monica mountains was rotated clockwise by the transverse motion of the Pacific and North American plates.[1] Lava from these eruptions can be found across the region, and in depths of up to 10,000 feet (3,000 m).[1] The rocks that make up Anacapa are composed of lava, breccias, volcanic ash and cinders.[2]

As recently as the end of the last ice age (about 10,000 years ago), sea levels as much as 400 ft (122 m) lower meant that the four northern Channel Islands were part of a single large island (dubbed "Santa Rosae") that lay about 5 miles (8 km) off the California coast.[1] Fossils of pygmy mammoths from this Late Pleistocene period 13,000 years ago have been found on the other three northern islands and it is reasonable to assume pygmy mammoths were also present on Anacapa.[1]

In The Channel Islands of California (1910), Charles Frederick Holder says of Anacapa:

Arid appearing, desolate, wind-swept, Anacapa is withal a valuable possession to its owner, and one of the picturesque islands of the entire group. Its strange rocks, moving, passing, intermingling, made a strong impression on my mind, an impression of warring nature, conflicts of wind and rock, of seas eating into its very vitals, of caves that undermine it, and of the old rock fighting for its very life against the sea.[4]

Anacapa Island, located only about 11 mi (18 km) from the urbanized coast of Southern California, provides critical habitat for seabirds, pinnipeds such as California sea lions, and several endemic plants and animals. Great white sharks, feeding on pinnipeds, are found in the waters of the Channel Islands, including Anacapa. The island has a somewhat diverse flora, including around 150 native plants, including 16 endemics (two of which are unique to the island) plus many introduced species.

Anacapa has around 69 species of birds. The island's steep lava rock cliffs incorporate numerous caves and crevices that are particularly important for the increasingly rare seabird Scripps's murrelet (a threatened species known as Xantus's murrelet until 2012). The cliffs are also an important location for the ashy storm-petrel. The largest breeding colony of the California brown pelican in the United States, and one of the only two in California, also occurs on Anacapa Island. This is where the brown pelican has been able to recover so dramatically from near extinction in the 1970s. The islets of Anacapa also host the largest breeding colony of western gulls in the world. Western gulls begin their nesting efforts at the end of April, sometimes making their shallow nests just inches from trails. Fluffy chicks hatch in May and June and fly away from the nests in July.

Anacapa's prolific and dense vegetation was once dominated by the showy giant coreopsis (Leptosyne gigantea) previously named Coreopsis gigantea, an erect, shrubby perennial with a stout, succulent trunk growing to some 8 ft (2 m) tall. The main trunk grows up to 5 in (13 cm) thick and often resembles a small tree. During its blooming season, March to May, it bursts forth with a mass of showy, bright yellow flowers and green leaves. Giant coreopsis provided shelter and perches for seabirds and land birds, and nesting habitat for many. The prolific seeds provided abundant food for the endemic Anacapa deer mouse, and for many small birds. The island's stands of giant coreopsis, as well as all the other plants of its coastal bluff community, were devastated by sheep grazing in the late 1800s and early 1900s, rabbit browsing in 1910-1950s, and by large-scale destruction of native vegetation associated with facility and road development by the U.S. Coast Guard during construction and manning of the Anacapa Light Station. Only small patches and individuals of native plants remained.[7]

Malacothrix junakii is a rare species of aster known by the common names Anacapa Island desert-dandelion, Junak's desert dandelion and Junak's malacothrix that is endemic to Anacapa, where it is known from just two occurrences.[8] It occurs in the coastal scrub of the island and was described to science as a new species in 1997.[9]

Black rats (Rattus rattus), also known as ship rats, had a major impact on wildlife on Anacapa Island, including seabirds, such as Scripps's murrelet, reptiles and amphibians, intertidal and terrestrial invertebrates and vegetation.[10] Before an eradication program in 2001–02, more than 96 percent of Scripps's Murrelet nests on Anacapa were attacked by invasive rats.[11] The rats were certainly introduced sometime prior to 1939 (when they were noted by NPS researchers Sumner and Bond), probably in supplies brought onto the island for sheep ranching or building the lighthouse.[10][12] The National Park Service says there is evidence they were present in 1907.[13] A 1979 study noted that they could have been introduced from a shipwreck such as the SS Winfield Scott in 1853.[10]

European rabbits were introduced to East Island either as an emergency food supply for lighthouse personnel during World War II or as pets.[14] They were present from the 1940s until at least 1965.[14] No rabbits were recorded from Middle or West Anacapa.[14]

Domestic cats were introduced to Anacapa as pets of the fisherman "Frenchy" after whom Frenchy's Cove on West Island is named.[15] In 1966, there remained a small population.[16]

Sheep were grazed on the island for many years. There are records from the 1870s through the 1930s.[17] Many writers reported that in the absence of springs on Anacapa sheep would lick the moisture that accumulated on each other's fleeces from the coastal fog.[18] The native flora was affected by the forage grasses that farmers introduced to feed their flocks, and by soil-compaction caused by the sheep's hooves.[19] Reproduction of ground-nesting species such as the meadowlark and horned lark is also thought to have been harmed by grazing.[19]

After completion of the lighthouse and associated facilities, the Coast Guard planted two types of iceplant on East Anacapa Islet: red-flowered iceplant (Malephora crocea) and sea fig, also called freeway iceplant (Carpobrotus edulis x aequilaterus). Both species are highly invasive.[7] The National Park Service has initiated a restoration project to eradicate all of the ice plant by 2016, the centennial of the National Park Service Organic Act.

Vegetation on Anacapa began to recover after the removal of sheep about 1938 and rabbits in the 1950s.[7]

Black rats were successfully eradicated from Anacapa Island by 2003, under a controversial program that involved an aerial application of the rodenticide brodifacoum. This was the first time a rodenticide had been applied aerially in North America (the technique was pioneered in New Zealand).[20] One complicating factor was the presence of the native deer mouse subspecies (Peromyscus maniculatus anacapae). This was the first time that biologists had attempted to eradicate one rodent species from an entire island where an endemic rodent was present.[20] Deer mice were captured prior to the application of rodenticide and reintroduced after poison levels had dropped.[21] The program cost about $1.8 million.[22]

A study after the eradication project showed that nesting attempts by Scripps's murrelets on Anacapa had more than doubled, average hatching success was up from 42 to 80 percent average nest predation was down from 52 to 7 percent.[22] Only four months after the rodenticide applications, Cassin's auklet (Ptychoramphus aleuticus) began nesting on Anacapa. This was significant as there were no previous records of the bird nesting on the island and it is known to be highly susceptible to rat predation.[22]

This region experiences warm (but not hot) and dry summers, with no average monthly temperatures above 71.6 °F (22.0 °C). According to the Köppen Climate Classification system, Anacapa Island has a warm-summer Mediterranean climate, abbreviated "Csb" on climate maps.[23] 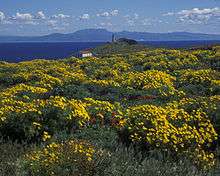 Coreopsis and a view of the Anacapa Island Light

Anacapa is the only one of the Channel Islands to have a non-Spanish-derived name. Anacapa comes from the Chumash word Ennepah or Anyapakh, meaning "mirage island".[24][25]

On a visit around 1910, Charles Frederick Holder noted "kitchen-middens, and deposits of ancient shells, and the tell-tale black earth" of hearths.[26]

On the night of December 2, 1853, the sidewheel steamer Winfield Scott running at full speed crashed into the rocks off Middle Anacapa and sank. All of the passengers survived and were rescued after a week.[27]

The United States Coast Guard built a light beacon in 1912 and a light station in 1932 (Anacapa Island Light). It was the last lighthouse built by the United States Lighthouse Service. The lighthouse is located on the eastern part of the island, at the entrance to the Santa Barbara Channel.

Along with the Channel Islands Beach area of Port Hueneme, the islands in Census Tract 36.12 of Ventura County, California. The official 2000 census population was 3 permanent residents (at the ranger station in the eastern part of East Island).