This article is about island chains. For other uses, see Archipelago (disambiguation).
Not to be confused with arpeggio or a cappella. 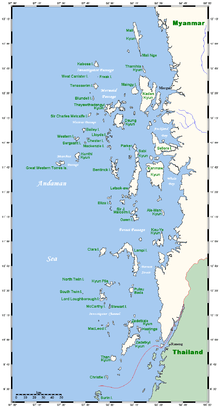 The Mergui Archipelago in Burma (Myanmar). 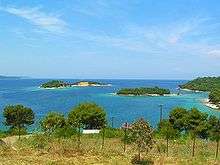 The Ksamil Archipelago in Albania.

i/ɑːrkᵻˈpɛləɡoʊ/ ark-i-PEL-ə-goh), sometimes called an island group or island chain, is a chain, cluster or collection of islands. The word archipelago is derived from the Greek ἄρχι- – arkhi- ("chief") and πέλαγος – pélagos ("sea") through the Italian arcipelago. In Italian, possibly following a tradition of antiquity, the Archipelago (from medieval Greek *ἀρχιπέλαγος and Latin archipelagus) was the proper name for the Aegean Sea and, later, usage shifted to refer to the Aegean Islands (since the sea is remarkable for its large number of islands). It is now used to refer to any island group or, sometimes, to a sea containing a small number of scattered islands.

Archipelagos may be found isolated in large amounts of water or neighbouring a large land mass. For example, Scotland has more than 700 islands surrounding its mainland which form an archipelago. Archipelagos are often volcanic, forming along island arcs generated by subduction zones or hotspots, but may also be the result of erosion, deposition, and land elevation. Depending on their geological origin, islands forming archipelagos can be referred to as 'oceanic islands', 'continental fragments', and 'continental islands'.[1] Oceanic islands are mainly of volcanic origin. Continental fragments correspond to land masses that have separated from a continental mass due to tectonic displacement. Finally, sets of islands formed close to the coast of a continent are considered continental archipelagos when they form part of the same continental shelf so islands are just exposed continental shelf.