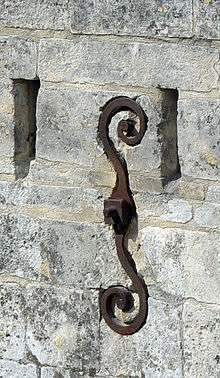 A stylized anchor plate in the cloister of the Church of St. Trophime, Arles (France)

One popular style is the star anchor — an anchor plate cast or wrought in the shape of a five-pointed star. Other names and styles of anchor plate include earthquake washer, triangular washer, S-iron, and T-head.[1] In the United Kingdom, pattress plate is the term for circular restraints,[2] tie bar being an alternate term for rectangular restraints.

Anchor plates are made of cast iron, sometimes wrought iron or steel, and are often used on brick or other masonry-based buildings. They are easy to find in cities with substantial legacies of 18th- and 19th-century brick construction, such as New York, Philadelphia, St. Louis, and Charleston, South Carolina, and in older earthquake prone cities such as San Francisco, as well as earlier examples in Gamla Stan, the Old Town in Stockholm. The tie-rod-and-plate assembly braces the masonry wall against lateral bowing.