This article refers to the building structure component; for the fraternal organization, see Freemasonry. 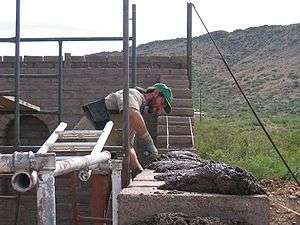 A mason laying mortar on top of a finished course of blocks, prior to placing the next course.

Masonry is the building of structures from individual units, which are often laid in and bound together by mortar; the term masonry can also refer to the units themselves. The common materials of masonry construction are brick, building stone such as marble, granite, travertine, and limestone, cast stone, concrete block, glass block, and cob. Masonry is generally a highly durable form of construction. However, the materials used, the quality of the mortar and workmanship, and the pattern in which the units are assembled can significantly affect the durability of the overall masonry construction. A person who constructs masonry is called a mason or bricklayer.

Masonry [1] is commonly used for the walls of buildings, retaining walls and buildings. Brick and concrete block are the most common types of masonry in use in industrialized nations and may be either weight-bearing or a veneer. Concrete blocks, especially those with hollow cores, offer various possibilities in masonry construction. They generally provide great compressive strength, and are best suited to structures with light transverse loading when the cores remain unfilled. Filling some or all of the cores with concrete or concrete with steel reinforcement (typically rebar) offers much greater tensile and lateral strength to structures.

Masonry has high compressive strength under vertical loads but has low tensile strength (against twisting or stretching) unless reinforced. The tensile strength of masonry walls can be increased by thickening the wall, or by building masonry piers (vertical columns or ribs) at intervals. Where practical, steel reinforcements such as windposts can be added.

Most insulated buildings that utilize concrete block, brick, adobe, stone, veneers or some combination thereof feature interior insulation in the form of fiberglass batts between wooden wall studs or in the form of rigid insulation boards covered with plaster or drywall. In most climates this insulation is much more effective on the exterior of the wall, allowing the building interior to take advantage of the aforementioned thermal mass of the masonry. This technique does, however, require some sort of weather-resistant exterior surface over the insulation and, consequently, is generally more expensive. 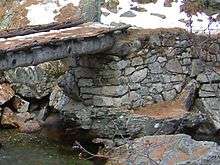 Dry set masonry supports a rustic log bridge, where it provides a well-drained support for the log (which will increase its service life).
See also: dry stone

The strength of a masonry wall is not entirely dependent on the bond between the building material and the mortar; the friction between the interlocking blocks of masonry is often strong enough to provide a great deal of strength on its own. The blocks sometimes have grooves or other surface features added to enhance this interlocking, and some dry set masonry structures forgo mortar altogether. 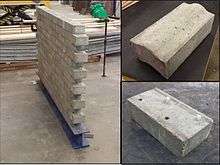 or SIM is a mortar-less masonry system. This is a new type of masonry block uses special curvature to allow the masonry block to stable through self weight when constructed as a panel. The principal practice of this panel is to help dissipate external energy, primarily due to seismic loadings. The basic concept is to generate friction between each element of the panel through movements to dissipate energy. SIM blocks was created based on dry stack masonry by Dr Yuri Totoev from University of Newcastle,[2] first introduced in print in 2011 in the Advance Material Research Journal.[3] This theory was based on the previously researched idea on dry stack masonry wall, energy dissipation depend significantly on the textural arrangement of the stones.[4] The idea of SIM panel is to improve on the traditional reinforced masonry. The design principal is to allow construction without the requirements of traditional reinforced masonry.

When each blocks are constructed as a panel within supporting column, it is known as "In-fill panels".Two types of SIM block are available, mechanical and topological. Mechanical are described as Traditional shaped bricks with special perforations and dowels allows SIM blocks to interlock. Topological can be described as masonry blocks contains specific curvature which allows the blocks to interlocking with each other, while adding additional water resistance properties.

Solid brickwork is made of two or more wythes of bricks with the units running horizontally (called stretcher bricks) bound together with bricks running transverse to the wall (called "header" bricks). Each row of bricks is known as a course. The pattern of headers and stretchers employed gives rise to different 'bonds' such as the common bond (with every sixth course composed of headers), the English bond, and the Flemish bond (with alternating stretcher and header bricks present on every course). Bonds can differ in strength and in insulating ability. Vertically staggered bonds tend to be somewhat stronger and less prone to major cracking than a non-staggered bond. 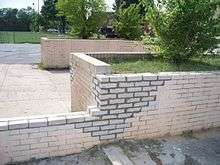 The wide selection of brick styles and types generally available in industrialized nations allow much variety in the appearance of the final product. In buildings built during the 1950s-1970s, a high degree of uniformity of brick and accuracy in masonry was typical. In the period since then this style was thought to be too sterile, so attempts were made to emulate older, rougher work. Some brick surfaces are made to look particularly rustic by including burnt bricks, which have a darker color or an irregular shape. Others may use antique salvage bricks, or new bricks may be artificially aged by applying various surface treatments, such as tumbling. The attempts at rusticity of the late 20th century have been carried forward by masons specializing in a free, artistic style, where the courses are intentionally not straight, instead weaving to form more organic impressions.

Concrete masonry units (CMUs) or blocks in a basement wall before burial.

Blocks of cinder concrete (cinder blocks or breezeblocks), ordinary concrete (concrete blocks), or hollow tile are generically known as Concrete Masonry Units (CMUs). They usually are much larger than ordinary bricks and so are much faster to lay for a wall of a given size. Furthermore, cinder and concrete blocks typically have much lower water absorption rates than brick. They often are used as the structural core for veneered brick masonry, or are used alone for the walls of factories, garages and other industrial-style buildings where such appearance is acceptable or desirable. Such blocks often receive a stucco surface for decoration. Surface-bonding cement, which contains synthetic fibers for reinforcement, is sometimes used in this application and can impart extra strength to a block wall. Surface-bonding cement is often pre-coloured and can be stained or painted thus resulting in a finished stucco-like surface.

The primary structural advantage of concrete blocks in comparison to smaller clay-based bricks is that a CMU wall can be reinforced by filling the block voids with concrete with or without steel rebar. Generally, certain voids are designated for filling and reinforcement, particularly at corners, wall-ends, and openings while other voids are left empty. This increases wall strength and stability more economically than filling and reinforcing all voids. Typically, structures made of CMUs will have the top course of blocks in the walls filled with concrete and tied together with steel reinforcement to form a bond beam. Bond beams are often a requirement of modern building codes and controls. Another type of steel reinforcement, referred to as ladder-reinforcement, can also be embedded in horizontal mortar joints of concrete block walls. The introduction of steel reinforcement generally results in a CMU wall having much greater lateral and tensile strength than unreinforced walls.

CMUs can be manufactured to provide a variety of surface appearances. They can be colored during manufacturing or stained or painted after installation. They can be split as part of the manufacturing process, giving the blocks a rough face replicating the appearance of natural stone, such as brownstone. CMUs may also be scored, ribbed, sandblasted, polished, striated (raked or brushed), include decorative aggregates, be allowed to slump in a controlled fashion during curing, or include several of these techniques in their manufacture to provide a decorative appearance.[5]

Glass block or glass brick are blocks made from glass and provide a translucent to clear vision through the block.

A-jacks (used in erosion control walls and sea walls) are highly stable, concrete 6-pronged armor units designed to interlock into a flexible, highly permeable matrix. They can be installed either randomly or in a uniform pattern. They look like giant 3-foot versions of the metal jacks that children play with.

In the uniform placement pattern, each unit is in contact with the six adjacent units, providing high stability. They are patterned after the buckyball model.[7]

Stone blocks used in masonry can be dressed or rough, though in both examples: corners, door and window jambs, and similar areas are usually dressed. Stone masonry utilizing dressed stones is known as ashlar masonry, whereas masonry using irregularly shaped stones is known as rubble masonry. Both rubble and ashlar masonry can be laid in coursed rows of even height through the careful selection or cutting of stones, but a great deal of stone masonry is uncoursed.

Gabions are baskets, usually now of zinc-protected steel (galvanized steel) that are filled with fractured stone of medium size. These will act as a single unit and are stacked with setbacks to form a revetment or retaining wall. They have the advantage of being both well drained and flexible, and so resistant to flood, water flow from above, frost damage, and soil flow. Their expected useful life is only as long as the wire they are composed of and if used in severe climates (such as shore-side in a salt water environment) must be made of appropriate corrosion-resistant wire. Most modern gabions are rectangular.

A low grade concrete may be placed in woven plastic sacks similar to that used for sandbags and then emplaced. The sacks are then watered and the emplacement then becomes a series of artificial stones that conform to one another and to adjacent soil and structures. This conformation makes them resistant to displacement. The sack becomes non-functional and eventually disintegrates. This type of masonry is frequently used to protect the entrances and exits of water conduits where a road passes over a stream or dry wash. It is also used to protect stream banks from erosion, especially where a road passes close by.

Stonemasonry is one of the earliest crafts in the history of construction. It is a central traditional skill.

Masonry walls have an endothermic effect of its hydrates, as in chemically bound water, as well as unbound moisture from the concrete block, as well as the poured concrete if the hollow cores inside the blocks are filled.

Masonry buildings can also be built to increase safety by reducing fire damage, such as the use of fire cuts during construction. 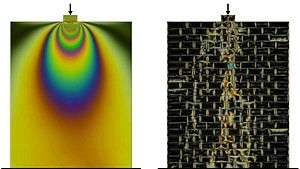 A comparison (using transmission photoelasticity) between the stress diffusion in an elastic body (on the left) and a model of masonry (on the right). A highly localized stress percolation is visible on the right.

From the point of view of material modelling, masonry is a special material of extreme mechanical properties (with a very high ratio between strength in compression and in tension), so that the applied loads do not diffuse as they do in elastic bodies, but tend to percolate along lines of high stiffness,[8][9] see the figure on the right and watch a video for more details.