As with many other early, successful 19th century women sculptors, Whitney came from a supportive and liberal – in her case, Unitarian – family background. She was homeschooled and later traveled to Europe, where she studied in Rome, Munich, and Paris before she returning to the US. In 1846 she opened a small school in Salem, Massachusetts. 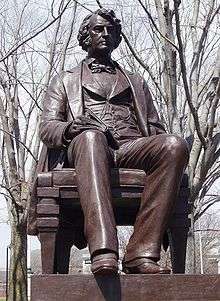 Statue of Charles Sumner in Harvard Square sculpted by Whitney 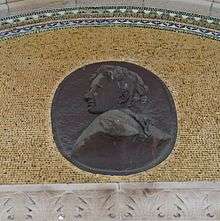 In the 1860s she exhibited work in the Boston gallery of De Vries, Ibarra & Co.[1] A well-known supporter of both the abolitionist and suffragette movements, Whitney felt the brunt of sexism when in 1875, she won the commission for a statue of Charles Sumner but was denied it because she was a woman.[2]

Whitney and her companion, Addy Manning, lived abroad in the 1860s and 1870s, in Rome, Florence, and Paris. Associated with a group of female artists Henry James described as the "white, marmorean flock", Whitney's life abroad is well documented by more than 400 letters she sent to her family,[3] now among more than 4,000 letters, photographs, and other documentation in the Anne Whitney Archive at Wellesley College.[4] Among her well-known public monuments is the statue of Samuel Adams (1876) in the National Statuary Hall Collection in the US Capitol, Washington D.C.; another is the statue of Leif Ericson (1887) in Boston, another edition of which was placed in Juneau Park, Milwaukee, Wisconsin that year.

123 works by Anne Whitney are listed in the Art Inventories Catalog hosted by the Smithsonian American Art Museum.[7] These include: