Rosa Bonheur, born Marie-Rosalie Bonheur, (16 March 1822 – 25 May 1899) was a French artist, an animalière (painter of animals) and sculptor, known for her artistic realism. Her most well-known paintings are Ploughing in the Nivernais,[1] first exhibited at the Paris Salon of 1848, and now at Musée d’Orsay in Paris, and The Horse Fair (in French: Le marché aux chevaux),[2] which was exhibited at the Salon of 1853 (finished in 1855) and is now in the Metropolitan Museum of Art, in New York City. Bonheur is widely considered to be the most famous female painter of the nineteenth century.[3] 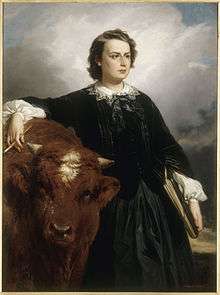 Edouard Louis Dubufe, Portrait of Rosa Bonheur 1857. Symbolic of her work as an Animalière, the artist is depicted with a bull.

Bonheur was born on 16 March 1822 in Bordeaux, Gironde, the oldest child in a family of artists.[4] Her mother was Sophie Bonheur (née Marquis), a piano teacher; she died when Rosa Bonheur was eleven. Her father was Oscar-Raymond Bonheur, a landscape and portrait painter. The Bonheur family adhered to Saint-Simonianism, a Christian-socialist sect that promoted the education of women alongside men. Bonheur's siblings included the animal painters Auguste Bonheur and Juliette Bonheur and the animal sculptor Isidore Jules Bonheur. Francis Galton used the Bonheurs as an example of "Hereditary Genius" in his 1869 essay of the same title.[5] 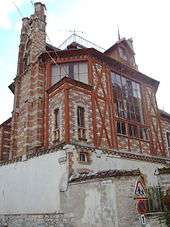 Rosa Bonheur's atelier in Château de By, Thomery, is a museum showing the place where she worked during the last 40 years of her life.[6]

Bonheur moved to Paris in 1828 at the age of six with her mother and siblings, her father having gone ahead of them to establish a residence and income. By family accounts, she had been an unruly child and had a difficult time learning to read, though even before she could talk she would sketch for hours at a time with pencil and paper.[7] Her mother taught her to read and write by asking her to choose and draw a different animal for each letter of the alphabet.[8] The artist credits her love of drawing animals to these reading lessons with her mother.

At school she was often disruptive, and she was expelled from numerous schools.[9] After a failed apprenticeship with a seamstress at the age of twelve, her father undertook to train her as a painter.

Following the traditional art school curriculum of the period, Bonheur began her training by copying images from drawing books and by sketching plaster models. As her training progressed, she made studies of domesticated animals, including horses, sheep, cows, goats, rabbits and other animals in the pastures on the perimeter of Paris, the open fields of Villiers near Levallois-Perret, and the still-wild Bois de Boulogne. At fourteen, she began to copy paintings at the Louvre. Among her favorite painters were Nicholas Poussin and Peter Paul Rubens, but she also copied the paintings of Paulus Potter, Frans Pourbus the Younger, Louis Léopold Robert, Salvatore Rosa and Karel Dujardin.[10]

She studied animal anatomy and osteology in the abattoirs of Paris and by dissecting animals at the École nationale vétérinaire d'Alfort, the National Veterinary Institute in Paris.[11] There she prepared detailed studies that she later used as references for her paintings and sculptures. During this period, she befriended father-and-son comparative anatomists and zoologists, Étienne Geoffroy Saint-Hilaire and Isidore Geoffroy Saint-Hilaire.[12]

A French government commission led to Bonheur's first great success, Ploughing in the Nivernais, exhibited in 1849. Her most famous work, the monumental Horse Fair, measured eight feet high by sixteen feet wide, and was completed in 1855.[13] It depicts the horse market held in Paris, on the tree-lined boulevard de l’Hôpital, near the Pitié-Salpêtrière Hospital, which is visible in the painting's background. This work led to international fame and recognition; that same year she traveled to Scotland and met Queen Victoria en route, who admired Bonheur's work. In Scotland, she completed sketches for later works including Highland Shepherd, completed in 1859, and A Scottish Raid, completed in 1860. These pieces depicted a way of life in the Scottish highlands that had disappeared a century earlier, and they had enormous appeal to Victorian sensibilities. Though she was more popular in England than in her native France, she was decorated with the French Legion of Honour by the Empress Eugénie in 1865, and was promoted to Officer of the order in 1894.[14]

Patronage and the market for her work

Art dealer Ernest Gambart (1814–1902) represented her; he brought Bonheur to the United Kingdom in 1855, and he purchased the reproduction rights to her work.[15] Many engravings of Bonheur's work were created from reproductions by Charles George Lewis (1808–1880), one of the finest engravers of the day. 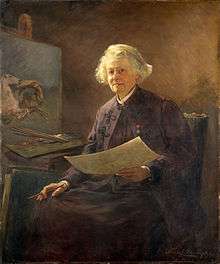 Women were often only reluctantly educated as artists in Bonheur's day, and by becoming such a successful artist she helped to open doors to women artists that followed her.[16]

Bonheur can be viewed as a "New Woman" of the 19th century; she was known for wearing men's clothing,[17] but she attributed her choice of trousers to their practicality for working with animals (see Rational dress).[18] 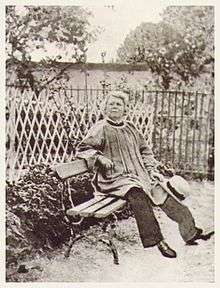 The first biography of Rosa Bonheur was published in her lifetime: a pamphlet written by Eugène de Mirecourt, Les Contemporains: Rosa Bonheur, which appeared just after her Salon success with The Horse Fair in 1856.[21] Bonheur later corrected and annotated this document.

The second account was written by Anna Klumpke, an American painter from Boston who met Bonheur in 1887 while serving as a translator for an American art collector. Klumpke and Bonheur became close friends in the last year of Bonheur's life. Klumpke's biography, published in 1909 as Rosa Bonheur: sa vie, son oeuvre, was translated in 1997 by Gretchen Van Slyke and published as Rosa Bonheur: The Artist's (Auto)biography, so-named because Klumpke had used Bonheur’s first-person voice.[22] 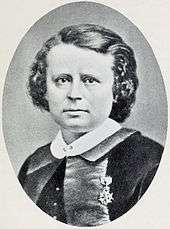 The most authoritative work is Reminiscences of Rosa Bonheur, edited by Theodore Stanton (the son of Elizabeth Cady Stanton), and published simultaneously in London and New York in 1910. This volume includes numerous correspondences between Bonheur and her family and friends, which lends greater insight into the artist’s life and her views of the art world and her art-making practices.[23]

As a mark of how well known and well thought of she was, the 1905 Women Painters of the World (assembled and edited by Walter Shaw Sparrow) was subtitled "from the time of Caterina Vigri, 1413–1463, to Rosa Bonheur and the present day".