Anneliese Michel [ˈanəˌliːzə ˈmɪçl̩] (21 September 1952 – 1 July 1976) was a German woman who underwent Catholic exorcism rites in 1975 and died the next year, in 1976. Later investigation determined that she was malnourished and dehydrated; her parents and the priests responsible were charged with negligent homicide. The case attracted media and public attention because of the Catholic Church's unusual decision to employ the 400-year-old ritual of exorcism, something that had been rarely seen since the 18th Century. The film The Exorcism of Emily Rose is loosely based on her story.

When Michel was sixteen, she experienced an epileptic seizure and was diagnosed with temporal lobe epilepsy. She was diagnosed as depressed and treated at a psychiatric hospital. By the time she was twenty, she had become intolerant of various religious objects, and began to hear voices. Her condition worsened, despite medication, and she became suicidal. Michel and her family became convinced she was possessed by demons, and appealed to a Catholic priest for an exorcism. While rejected at first, after much hesitation, two priests got permission from the local bishop in 1975, and performed exorcism rites on her for 10 months, in secret (as ordered by the bishop). After her death, Michel's parents and the two priests were found guilty of negligent homicide, and were sentenced to six months in jail (reduced to three years of probation), and a fine. The case has been cited as an example of a misidentified mental disorder, negligence, abuse and religious hysteria.

Michel was born as Anna Elisabeth Michel[1][2] on 21 September 1952 in Leiblfing, Bavaria, West Germany to a Catholic family. She was brought up along with three sisters by her parents, Josef and Anna. She was deeply religious and went to Mass twice a week. When she was sixteen, she suffered a severe convulsion and was diagnosed with temporal lobe epilepsy. In 1973, Michel graduated and joined the University of Würzburg. Her classmates later described her as "withdrawn and very religious".[3][4][5]

In June 1970, Michel suffered a third seizure at the psychiatric hospital where she had been staying. She was prescribed anti-convulsion drugs for the first time, including Dilantin, which did not alleviate the problem. She began describing seeing "devil faces" at various times of the day.[3] That same month, she was prescribed another drug, Aolept, which is similar to chlorpromazine and is used in the treatment of various psychoses including schizophrenia, disturbed behavior and delusions.[4] By 1973, she suffered from depression and began hallucinating while praying, and complained about hearing voices telling her that she was "damned" and would "rot in hell".[6] Michel's treatment in a psychiatric hospital did not improve her health and her depression worsened. Long term treatment did not help either, and she grew increasingly frustrated with the medical intervention. Being a devout Catholic, she began to attribute it to demonic possession. Michel became intolerant of sacred places and objects, such as the crucifix.[3]

Michel went to San Damiano with a family friend who regularly organized such pilgrimages to "holy places"—not officially recognized by the church.[7] Her escort concluded that she was suffering from demonic possession because she was unable to walk past a crucifix and refused to drink the water of a holy spring. Both she and her family became convinced and consulted several priests, asking for an exorcism.[6] The priests declined, recommended the continuation of medical treatment, and informed the family that exorcisms required the bishop's permission. In the Catholic Church, official approval for an exorcism is given when the person strictly meets the set criteria, then they are considered to be suffering from possession (infestatio) and under demonic control. Intense dislike for religious objects and "supernatural powers" are some of the first indications.[5] Michel worsened physically and displayed aggression, self-injury, drank her own urine and ate insects. In November 1973, Michel started her treatment with Tegretol, an anti-seizure drug and mood stabilizer.[4] She was prescribed anti-psychotic drugs during the course of the religious rites and took them frequently until some time before her death.[8] 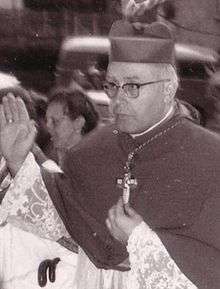 The priest Ernst Alt, whom they met, on seeing her declared that "she didn't look like an epileptic" and that he did not see her having seizures.[7] Alt believed she was suffering from demonic possession and urged the local bishop to allow an exorcism. In a letter to Alt in 1975, Michel wrote, "I am nothing, everything about me is vanity, what should I do, I have to improve, you pray for me" and also once told him, "I want to suffer for other people...but this is so cruel".[5] In September of the same year, Bishop Josef Stangl granted the priest Arnold Renz permission to exorcise according to the Rituale Romanum of 1614, but ordered total secrecy.[9][note 1] Renz performed the first session on 24 September. Michel began talking increasingly about "dying to atone for the wayward youth of the day and the apostate priests of the modern church", and she refused to eat towards the end.[6] At this point, her parents stopped consulting doctors on her request and relied solely on the exorcism rites.[6] 67 exorcism sessions, one or two each week, lasting up to four hours, were performed over about ten months in 1975–1976.[5]

On 1 July 1976, Michel died in her home. The autopsy report stated the cause was malnutrition and dehydration because of being in a semi-starvation state for almost a year while the rites of exorcism were performed.[11] She weighed 30 kilograms (68 pounds), suffering broken knees due to continuous genuflections. She was unable to move without assistance, and was reported to have contracted pneumonia.[8]

After an investigation, the state prosecutor maintained that Michel's death could have been prevented even one week before she died.[12]

In 1976, the state charged Michel's parents and priests Ernst Alt and Arnold Renz with negligent homicide.[13] During the case Michel's body was exhumed and tapes were played to the court of the exorcisms over the eleven months which led to her death.[14] The parents were defended by Erich Schmidt-Leichner. The state recommended that no involved parties be jailed; instead, the recommended sentence for the priests was a fine, while the prosecution concluded that the parents should be exempt from punishment as they had "suffered enough",[13] which is a criterion in German penal law, cf. § 60 StGB.

The trial started on 30 March 1978 in the district court and drew intense interest. Before the court, doctors testified that Michel was not possessed, stating that this was a psychological effect because of her strict religious upbringing and her epilepsy, but Doctor Richard Roth, who was asked for medical help by Alt, allegedly told her during the exorcism, that "there is no injection against the devil, Anneliese".[6] The priests were defended by lawyers retained by the Church, and Schmidt-Leichner, who defended the parents, claimed that the exorcism was legal and that the German constitution protected citizens in the unrestricted exercise of their religious beliefs. The defense played tapes recorded at the exorcism sessions, sometimes featuring what was claimed to be "demons arguing", to assert their claim that Michel was possessed. Both priests insisted on that and claimed the demons identified themselves as Lucifer, Cain, Judas Iscariot, Hitler, and Nero among others; they further said that she was finally freed because of the exorcism just before her death.[6][12]

The bishop said that he was not aware of her alarming health condition when he approved of the exorcism and did not testify. The accused were found guilty of manslaughter resulting from negligence and were sentenced to six months in jail (which was later suspended) and three years of probation.[12] It was a far lighter sentence than anticipated,[6] but it was more than requested by the prosecution, who had asked that the priests only be fined and that the parents be found guilty but not punished. The Church approving such an old fashioned exorcism rite drew public and media attention. The case has been labelled as a misidentification of mental illness, negligence, abuse, and religious hysteria.[15] 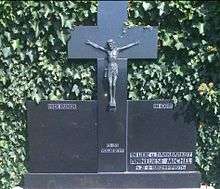 Michel's gravestone. Her grave became a place of pilgrimage.

After the trial, the parents asked the authorities for permission to exhume the remains of their daughter. The official reason presented by the parents to authorities was that Michel had been buried in undue hurry in a cheap coffin. Almost two years after the burial, on 25 February 1978, her remains were replaced in a new oak coffin lined with tin. The official reports state that the body bore the signs of consistent deterioration. The accused exorcists were discouraged from seeing the remains of Michel. Arnold Renz later stated that he had been prevented from entering the mortuary.[8]

The church changed its position stating she was mentally ill, not possessed.[16] Her grave became a pilgrimage site.[17] Ulrich Niemann, a Jesuit priest, doctor and psychiatrist, whom priests call in exorcism cases, told The Washington Post, "As a doctor, I say there is no such thing as possession... In my view, these patients are mentally ill. I pray with them, but that alone doesn't help. You have to deal with them as a psychiatrist. But at the same time, when the patient comes from Eastern Europe and believes that he's been impaired by evil, it would be a mistake to ignore his belief system." Niemann further said that he does not think he is an exorcist and does not perform the Roman ritual of 1614.[6] The number of officially sanctioned exorcisms has decreased in Germany due to this case, in spite of Pope Benedict XVI support for wider use of it compared to Pope John Paul II, who previously made the rules more strict involving only rare cases in 1999.[16][18]

Three films, The Exorcism of Emily Rose (which focuses on the court case and not the exorcism), Requiem and Anneliese: The Exorcist Tapes, are loosely based on Michel's story.[3]

In 2013, a fire broke out in the house where she lived and although the local police said it was a case of arson, the local town people attributed it to this case.[8][19][20]