Over the course of a five-decade career, she starred in nearly 150 films. She is a three-time César Award winner (1977, 1996, 2002), a two-time Molière Award winner (2002), a David di Donatello Award winner (1977), a BAFTA nominee (1962), and a recipient of several international prizes including the Volpi Cup (Best actress) at the 1965 Venice Film Festival for Three Rooms in Manhattan.

After graduating from the prestigious Conservatoire de la rue Blanche in 1954 with two First Prizes in Modern and Classical Comedy, she joined the Comédie Française, where she was a resident actor from 1954-57.

In 1955, she began her film career, making her film debut in Treize à table, but it was with theatre that she started to attract the attention of critics. Her performance in Jean Cocteau's play La Machine à écrire in 1956 was admired by the author who called her "The finest dramatic temperament of the Postwar period".[4] In 1958, Luchino Visconti directed her opposite Jean Marais in a French stage adaptation of William Gibson's Two for the Seesaw.[5]

with Renato Salvatori in Luchino Visconti's Rocco and His Brothers (1960)

In 1956, she was awarded the Prix Suzanne Bianchetti as best up-and-coming young actress, but only with Luchino Visconti's epic Rocco e i suoi fratelli (Rocco and His Brothers, 1960), she was able to draw the public's attention to her. In 1962, she married Italian actor Renato Salvatori. Travelling back and forth between two film careers in France and Italy, Girardot also worked with renown Italian directors, including Marco Ferreri in the scandalous The Ape Woman (1964), which became one of the main attractions at the 1964 Cannes Film Festival. In 1968, she also starred in the cult anti-consumerism French film Erotissimo (Gérard Pirès, 1968).[6]

By the end of the 1960s, she had become a movie star and a box-office magnet in France with such films as Vice and Virtue (1963); Live for Life (1967); Love Is a Funny Thing (1969); and Mourir d'aimer ("To die of love", 1971), the fact-based tale of Gabrielle Russier (1937-1969), a middle-aged classics teacher whose affair with a much younger student made her the object of bourgeoisie ridicule. The film was nominated for a Golden Globe, and remains Girardot's biggest box office hit in France.

Throughout the 1970s, Girardot came back and forth between drama and comedy, proving herself an adept comedian in such successful comedies as Claude Zidi's La Zizanie, Michel Audiard's She Does Not Drink, Smoke or Flirt But... She Talks or Philippe de Broca's Dear Detective. In 1974, she starred in the hit teen movie, La Gifle, as Isabelle Adjani's mother. In 1972, she said in an interview to The New York Times, citing as Exhibit A her role as a sideshow freak in The Ape Woman, “I think I’ve proven that I’m opposed to typecasting. I believe that the acting of any role — from duchess to kitchen slavey — must be a form of transformation".[1] In 1977, she won her first César Award for Best Actress portraying the title character in the drama Docteur Françoise Gailland. Throughout the 1970s, she was the highest paid actress in France, and was nicknamed "La Girardot" by the press due to the fact that her name alone was enough to guarantee the success of a film.[8] Indeed, between the release of Live for Life in 1967 and Jupiter's Thigh in 1980, 24 of her films have attracted more than one million admissions in France.[9]

Girardot's popularity became one of the symbols of the 1970s feminist movement in France, as the audience embraced the "everywoman" quality she brought to the strong-minded female characters she regularly played in both dramas and comedies. In her 1989 autobiography, "Vivre d'aimer", she wrote of her popularity that "People didn't come to watch a beautiful, vamp-like creature, but simply a woman. [...] I played a judge, a lawyer, a taxi driver, a cop, a surgeon. I was never a glamorous star.".[10] 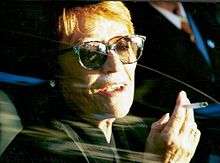 The 1980s were less kind, as her career floundered and parts dwindled. In 1983, she lost a fortune when "Revue Et Corrigée", the musical show she put on and starred in at the Casino de Paris, flopped.[11] She subsequently battled depression, but bounced back with several television series in France and Italy. However, Girardot had a major comeback on the big screen playing a peasant wife in Claude Lelouch's Les Misérables. The role won her a second César Award for Best Supporting Actress in 1996. Upon accepting the award, a joyous and tearful Girardot expressed her happiness that she had not been forgotten by the film industry in a speech that remained very famous.[12] In 1992, she was the Head of the Jury at the 42nd Berlin International Film Festival.[13]

In 2002, she was awarded the César Award for Best Supporting Actress for her role in The Piano Teacher. She collaborated with director Michael Haneke again, in Caché (2005).

On stage she had a triumph in 1974 with Madame Marguerite, which became her signature role that she reprised on numerous occasions until 2002. That year she was awarded the Molière Award for this role, along with a Honorary Molière Award for her entire stage career.

Girardot is the highest ranked woman in the list of French stars who have appeared in the most movies that have attracted more than one million admissions in France since 1945, with 44 films.[9]

She married Italian actor Renato Salvatori in 1962. They had a daughter, Giulia, and later separated but never divorced. 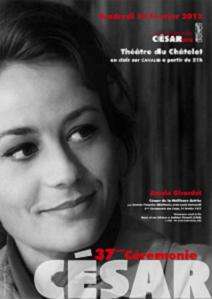 After going public in the 21 September 2006 issue of Paris Match with the news that she was suffering from Alzheimer's disease, she became a symbol of the illness in France.

A year after her death, the 37th annual César Awards 2012 selected a picture of Annie Girardot from the 1962 film Rocco and His Brothers as the official promotional poster of the ceremony, during which she was paid tribute with a retrospective montage of her most memorable roles on film.[15]

In September 2012, a street located in the 13th arrondissement of Paris was named after her.

In October 2012, France's Postal service has issued a collection of stamps dedicated to six major figures of French Post-War cinema, including Annie Girardot.[16]