Apollonius of Perga (Greek: Ἀπολλώνιος; Latin: Apollonius Pergaeus; c. 262 – c. 190 BC) was a Greek geometer and astronomer noted for his writings on conic sections. His innovative methodology and terminology, especially in the field of conics, influenced many later scholars including Ptolemy, Francesco Maurolico, Johannes Kepler, Isaac Newton, and René Descartes. Apollonius gave the ellipse, the parabola, and the hyperbola their modern names. The hypothesis of eccentric orbits, or equivalently, deferent and epicycles, to explain the apparent motion of the planets and the varying speed of the Moon, is also attributed to him. Ptolemy describes Apollonius' theorem in the Almagest XII.1. Apollonius also researched the lunar history, for which he is said to have been called Epsilon (ε). The crater Apollonius on the Moon is named in his honor. He is one of the ancient geometers.

Parabola connection with areas of a square and a rectangle, that inspired Apollonius of Perga to give the parabola its current name.

The degree of originality of the Conics (Κωνικά) can best be judged from Apollonius's own prefaces. Books i–iv he describes as an "elementary introduction" containing essential principles, while the other books are specialized investigations in particular directions. He then claims that, in Books i–iv, he only works out the generation of the curves and their fundamental properties presented in Book i more fully and generally than did earlier treatises, and that a number of theorems in Book iii and the greater part of Book iv are new. Allusions to predecessor's works, such as Euclid's four Books on Conics, show a debt not only to Euclid but also to Conon and Nicoteles.

He defines the fundamental conic property as the equivalent of the Cartesian equation applied to oblique axes—i.e., axes consisting of a diameter and the tangent at its extremity—that are obtained by cutting an oblique circular cone. The way the cone is cut does not matter. He shows that the oblique axes are only a particular case after demonstrating that the basic conic property can be expressed in the same form with reference to any new diameter and the tangent at its extremity. It is the form of the fundamental property (expressed in terms of the "application of areas") that leads him to give these curves their names: parabola, ellipse, and hyperbola. Thus Books v–vii are clearly original.

In Book v, Apollonius treats normals as minimum and maximum straight lines drawn from given points to the curve (independently of tangent properties); discusses how many normals can be drawn from particular points; finds their feet by construction; and gives propositions that both determine the center of curvature at any point and lead at once to the Cartesian equation of the evolute of any conic. 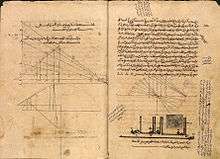 Pages from the 9th century Arabic translation of the Conics

Apollonius in the Conics further developed a method that is so similar to analytic geometry that his work is sometimes thought to have anticipated the work of Descartes by some 1800 years. His application of reference lines, a diameter and a tangent, is essentially no different than our modern use of a coordinate frame, where the distances measured along the diameter from the point of tangency are the abscissas, and the segments parallel to the tangent and intercepted between the axis and the curve are the ordinates. He further developed relations between the abscissas and the corresponding ordinates that are equivalent to rhetorical equations of curves. However, although Apollonius came close to developing analytic geometry, he did not manage to do so since he did not take into account negative magnitudes and in every case the coordinate system was superimposed upon a given curve a posteriori instead of a priori. That is, equations were determined by curves, but curves were not determined by equations. Coordinates, variables, and equations were subsidiary notions applied to a specific geometric situation.[1]

Pappus mentions other treatises of Apollonius:

Each of these was divided into two books, and—with the Data, the Porisms, and Surface-Loci of Euclid and the Conics of Apollonius—were, according to Pappus, included in the body of the ancient analysis.

De Rationis Sectione sought to resolve a simple problem: Given two straight lines and a point in each, draw through a third given point a straight line cutting the two fixed lines such that the parts intercepted between the given points in them and the points of intersection with this third line may have a given ratio.

De Spatii Sectione discussed a similar problem requiring the rectangle contained by the two intercepts to be equal to a given rectangle.

In the late 17th century, Edward Bernard discovered a version of De Rationis Sectione in the Bodleian Library. Although he began a translation, it was Halley who finished it and included it in a 1706 volume with his restoration of De Spatii Sectione.

De Sectione Determinata deals with problems in a manner that may be called an analytic geometry of one dimension; with the question of finding points on a line that were in a ratio to the others.[3] The specific problems are: Given two, three or four points on a straight line, find another point on it such that its distances from the given points satisfy the condition that the square on one or the rectangle contained by two has a given ratio either (1) to the square on the remaining one or the rectangle contained by the remaining two or (2) to the rectangle contained by the remaining one and another given straight line. Several have tried to restore the text to discover Apollonius's solution, among them Snellius (Willebrord Snell, Leiden, 1698); Alexander Anderson of Aberdeen, in the supplement to his Apollonius Redivivus (Paris, 1612); and Robert Simson in his Opera quaedam reliqua (Glasgow, 1776), by far the best attempt.[4]

De Tactionibus embraced the following general problem: Given three things (points, straight lines, or circles) in position, describe a circle passing through the given points and touching the given straight lines or circles. The most difficult and historically interesting case arises when the three given things are circles. In the 16th century, Vieta presented this problem (sometimes known as the Apollonian Problem) to Adrianus Romanus, who solved it with a hyperbola. Vieta thereupon proposed a simpler solution, eventually leading him to restore the whole of Apollonius's treatise in the small work Apollonius Gallus (Paris, 1600). The history of the problem is explored in fascinating detail in the preface to J. W. Camerer's brief Apollonii Pergaei quae supersunt, ac maxime Lemmata Pappi in hos Libras, cum Observationibus, &c (Gothae, 1795, 8vo).

The object of De Inclinationibus was to demonstrate how a straight line of a given length, tending towards a given point, could be inserted between two given (straight or circular) lines. Though Marin Getaldić and Hugo d'Omerique (Geometrical Analysis, Cadiz, 1698) attempted restorations, the best is by Samuel Horsley (1770).[4]

De Locis Planis is a collection of propositions relating to loci that are either straight lines or circles. Since Pappus gives somewhat full particulars of its propositions, this text has also seen efforts to restore it, not only by P. Fermat (Oeuvres, i., 1891, pp. 3–51) and F. Schooten (Leiden, 1656) but also, most successfully of all, by R. Simson (Glasgow, 1749).[4]

Ancient writers refer to other works of Apollonius that are no longer extant:

The best editions of the works of Apollonius are the following:

The Works of Apollonius of Perga online