The Apostolic Blessing or papal blessing is a blessing imparted by the Pope, either directly or by delegation through others. Bishops are empowered to grant it three times a year and any priest can do so for the dying.[1]

The Apostolic Blessing is not to be confused with an episcopal blessing, also known as a pontifical blessing, which bishops can impart at any time by their own authority.[1] 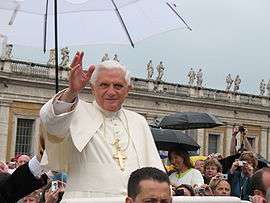 A particularly solemn form of imparting the Apostolic Blessing is as an Urbi et Orbi blessing, but it can be given also by letter or by a parchment scroll granted to individuals for some significant occasion, and no particular form of words is required.

Letters sent by the Pope to Catholics often conclude with the granting of the Apostolic Blessing to the person addressed and to others associated with that person. An example is the letter of Pope Francis to Cardinal Agostino Vallini on the 25th anniversary of his episcopal ordination.

Within his own diocese, a bishop may impart the Apostolic Blessing three times a year on solemn feasts. The same holds, within their territories, for non-bishop prelates (such as an apostolic prefect) recognized by canon law as juridically equivalent to diocesan bishops. In exceptional circumstances, they can impart it also on other occasions.[8][9] The blessing is imparted in place of the normal blessing at the end of Mass, using a particular formula.[10]

A plenary indulgence is granted to those who devoutly receive the papal blessing when imparted by the Pope himself in the Urbi et Orbi form or by their own bishop in accordance with this authorization. It is granted also to those who are unable to be present at the rite itself and who instead follow it piously by radio or television.[11][12]

Apostolic Blessings are granted also in written form on parchment through the Office of Papal Charities in Vatican City. Its website provides information on the occasions for which Catholics can request the granting of such a blessing and provides a downloadable form for making the request.

Apostolic Nuncios also are delegated to impart the Papal Blessing in written form.[13]

The Church's ritual book on the Pastoral Care of the Sick[14] uses the term "Apostolic Pardon" for what elsewhere, for instance in the Enchiridion Indulgentiarum, is called the "Apostolic Blessing with attached plenary indulgence".[15] Priests are urged to impart it to the dying, but if a priest cannot be had, the Church grants a plenary indulgence, to be acquired at the moment of death, to any rightly disposed Christian who in life was accustomed to say some prayers, with the Church itself supplying the three conditions normally required for gaining a plenary indulgence (Confession, Communion and prayers for the Pope's intentions).[16][17]