Argentina–Holy See relations are foreign relations between Argentina and the Holy See. The current pope, Pope Francis, was the former Archbishop of Buenos Aires. 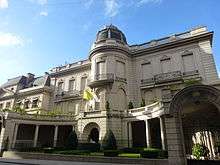 Argentina, which was a Spanish colony as part of the Viceroyalty of the Río de la Plata, lost its relation with the Holy See during the Argentine War of Independence. Both countries reestablished diplomatic relations on 17 April 1840, during the administration of Juan Manuel de Rosas. Argentina has an embassy to the Holy See, and the Holy See has an embassy in Buenos Aires.

Pope John Paul II made two pastoral visits. The first was in June 1982 where he called for an end to the Falklands War.[1] The second was in April 1987 where he lectured on morality.[2][3]

Vatican officials, including Pope John Paul II and Vatican Secretary of State Cardinal Agostino Casaroli acted as mediators to help resolve Argentina's dispute with Chile over the Beagle Channel. After the two countries almost went to war over the area in 1978, John Paul II became interested in resolving the dispute, which led to discussions between Chile and Argentina being mediated by the Vatican, and Argentine Foreign Minister Dante Caputo and Chilean Foreign Minister Jaime Del Valle issuing a joint statement of peace and friendship with the intent of developing a final treaty to resolve sovereignty in the channel.[4]

In early 2008, Argentine President Cristina Fernández de Kirchner appointed Alberto Iribarne to be Argentina's ambassador to the Holy See. The Vatican refused to accept him as an ambassador because he was divorced. After ten months of poor relations between the two countries, during which Argentina refused to appoint a new candidate and the Vatican refused to accept Iribarne, Argentina conceded and appointed Juan Pablo Cafiero to the post, which the Vatican quickly ratified. In March 2013, Jorge Mario Bergoglio, Archbishop of Buenos Aires was elected Pope.[5]