The Argentine Constitution of 1853 was an attempt to unite the unstable and young country of the United Provinces of the Rio de la Plata under a single law, creating as well the different organisms needed to run a country. This constitution was finally approved after failed attempts in 1813 (see Assembly of 1813), 1819 and 1831 (Pacto Federal).

Justice is administered by both federal and provincial courts. The former deal only with cases of a national character or those to which different provinces or inhabitants of different provinces are parties. The Supreme Court, which supervises and regulates all other federal courts, is composed of nine members nominated by the president and confirmed by the Senate. Other federal courts include nine appellate courts, with three judges for each; single judge district courts, at least one for each province; and one-judge territorial courts. The federal courts may not decide political questions. Judges of the lower courts are appointed by the president.

Provincial courts include supreme courts, appellate courts, courts of first instance, and minor courts of justices of the peace (alcaldes) and of market judges. Members of provincial courts are appointed by the provincial governors. Trial by jury was authorized by the 1853 constitution for criminal cases, but its establishment was left to the discretion of congress, resulting in sporadic use.

A 1991 law provides a fund for compensating prisoners who were illegally detained during the 1976–83 military dictatorship. In 1992 a system of oral public trials was instituted to speed up the judicial process while improving the protection of procedural rights of criminal defendants.

In practice, there is not a truly independent judiciary and the courts lack power to enforce orders against the executive. In 1989 President Carlos Menem, in a court-packing maneuver, expanded the number of Supreme Court justices from five to nine. In 2003, shortly after taking office, President Néstor Kirchner signaled his intention to remove some of Menem’s appointees and to strengthen the judiciary by undoing some of Menem's moves that turned the Supreme Court into a political ally of the president rather than an autonomous power of the state. Formal and informal constitutional accusation against Menem-appointed Supreme Court justices between 2003 and 2005 allowed Kirchner to appoint new justices. He also issued a degree limiting the powers of the president of the republic to appoint judges to the Supreme Court.

Structure of the Law in Argentina 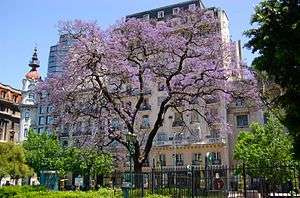 Jacarandá in bloom in Plaza Lavalle, the heart of Buenos Aires' legal district.

The first Civil Code was written by Argentine jurist Dalmacio Vélez Sársfield, and came into effect on January 1, 1871 and remained law until 1 August 2015, when it was replaced by a new Civil and Commercial Code - Código Civil y Comercial de la Nación.[1][2]

The 1871 Argentine Civil Code was largely inspired by the Spanish legal tradition, and also by the Brazilian Civil Code, the Spanish Civil Code of 1851, the Napoleonic code and the Chilean Civil Code. The sources of this Civil Code also include various theoretical legal works, mainly of the great French jurists of the 19th century. It was the first Civil Law that consciously adopted as its cornerstone the distinction between rights and obligations and real property rights, thus distancing itself from the French model.