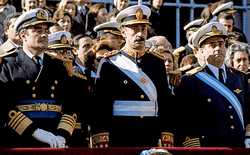 The National Reorganization Process (Spanish: Proceso de Reorganización Nacional, often simply el Proceso, "the Process")[1] was the name used by its leaders for the military dictatorship that ruled Argentina from 1976 to 1983. In Argentina it is often known simply as la última junta militar (the last military junta) or la última dictadura (the last dictatorship), because there have been several.[2]

The Argentine military seized political power during the March 1976 coup, amid violent factional conflicts between supporters of recently deceased President Juan Domingo Perón. The junta continued the Dirty War. After losing the Falklands War to the United Kingdom in 1982, the junta faced mounting public opposition and finally relinquished power in 1983. 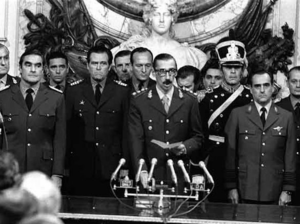 Lieutenant General Jorge Rafael Videla swearing the Oath as he becomes the President of Argentina.

The military has always been highly influential in Argentine politics, and Argentine history is laced with frequent and prolonged intervals of military rule. The popular Argentine leader, Juan Perón, three-time President of Argentina, was a colonel in the army who first came to political power in the aftermath of a 1943 military coup. He advocated a new policy dubbed Justicialism, a nationalist policy which he claimed was a "third way," an alternative to both capitalism and communism. After being re-elected to the office of president by popular vote, Perón was deposed and exiled by the Revolución Libertadora in 1955.

After a series of weak governments, and a seven-year military government, Perón returned to Argentina in 1973, following 20 years exile in Francoist Spain, amidst escalating political unrest, divisions in the Peronist movement, and frequent outbreaks of political violence. His return was marked by the June 20, 1973 Ezeiza massacre, after which the right-wing Peronist movement became dominant.

Peron was democratically elected President in 1973, but died in July 1974. His vice president and third wife, Isabel Martínez de Perón, succeeded him, but she proved to be a weak, ineffectual ruler. A number of revolutionary organizations – chief among them Montoneros, a group of far-left Peronists – escalated their wave of political violence (including kidnappings and bombings) against the campaign of harsh repressive and retaliatory measures enforced by the military and the police. In addition, right-wing paramilitary groups entered the cycle of violence, such as the Triple A death squad, founded by José López Rega, Perón's Minister of Social Welfare and a member of the P2 masonic lodge. The situation escalated until Mrs. Perón was overthrown. She was replaced on March 24, 1976 by a military junta led by Lieutenant General Jorge Rafael Videla. 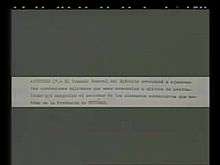 Official investigations undertaken after the end of the Dirty War by the National Commission on the Disappearance of Persons documented 8,961[3] desaparecidos (victims of forced disappearance) and other human rights violations, noting that the correct number is bound to be higher. Many cases were never reported, when whole families were disappeared, and the military destroyed many of its records months before the return of democracy.[3] Among the "disappeared" were pregnant women, who were kept alive until giving birth under often primitive circumstances in the secret prisons. The infants were generally illegally adopted by military or political families affiliated with the administration, and the mothers were generally killed. Thousands of detainees were drugged, loaded into aircraft, stripped naked and then thrown into the Rio de la Plata or the Atlantic Ocean to drown in what became known as "death flights."[4][5][6][7]

The film The Official Story (1984), which won the Oscar for the Best Foreign Film category in 1985, addresses this situation. The Argentine secret service SIDE (Secretaría de Inteligencia del Estado) also cooperated with the DINA in Pinochet's Chile and other South American intelligence agencies. The United States supported endeavours to eradicate left-leaning politics on the continent, known as Operation Condor. It is estimated to have caused the deaths of more than 60.000 people. SIDE also trained – for example in the Honduran Lepaterique base – the Nicaraguan Contras who were fighting the Sandinista government there.

The regime shut down the legislature and restricted both freedom of the press and freedom of speech, adopting severe media censorship. The 1978 World Cup, which Argentina hosted and won, was used as a means of propaganda and to rally its people under a nationalist pretense.

Corruption, a failing economy, growing public awareness of the harsh repressive measures taken by the regime, and the military defeat in the Falklands War, eroded the public image of the regime. The last de facto president, Reynaldo Bignone, was forced to call for elections by the lack of support within the Army and the steadily growing pressure of public opinion. On October 30, 1983 elections were held, and democracy was formally restored on December 10 with President Raúl Alfonsín being sworn into office.

Videla appointed José Alfredo Martínez de Hoz as Minister of Economy, charged with stabilizing and privatizing state-owned companies, along what would later be known as neoconservative lines. He was opposed by General Ramon Díaz, the Minister of Planning, who favored a corporatist model, with the state retaining control of key industries. Although Díaz resigned, military officers, many of whom looked forward to jobs running state enterprises, blocked Martínez de Hoz's privatization efforts. Meanwhile, the Junta borrowed money abroad for public works and social welfare spending. Martínez de Hoz was forced to rely on high interest rates and an over-valued exchange rate to control inflation, which hurt Argentine industry and exports. The Junta's economic policies also led to a diminishing of living standards, increasing inequalities in a country where, before the military government took office, 9% of the population lived in poverty (less than in France or the United States at that time) while the unemployment rate stood at 4.2%.[8]

In 2003 French journalist Marie-Monique Robin said she had found in the archives of the French Ministry of Foreign Affairs a document that proved a 1959 agreement had been made between Paris and Buenos Aires that authorized a 'permanent French military mission' being assigned to Argentina. The group was formed of soldiers who had fought in the Algerian War and dealt with insurgents. It was located in the offices of the chief of staff of the Argentine Army. She documented that Valéry Giscard d'Estaing's government secretly collaborated with Videla's junta in Argentina and with Augusto Pinochet's regime in Chile.[9]

Green deputies Noël Mamère, Martine Billard and Yves Cochet passed a resolution in September 2003 for a Parliamentary Commission to be convened on the "role of France in the support of military regimes in Latin America from 1973 to 1984," to be held before the Foreign Affairs Commission of the National Assembly and presided over by Edouard Balladur. Apart from Le Monde, newspapers remained silent about this request.[10] Deputy Roland Blum, who was in charge of the Commission, refused to let Marie-Monique Robin testify.

In December 2003, his staff published a 12-page that said no agreement had been signed between France and Argentina about military forces. But, Marie-Monique Robin had sent them a copy of the document she found showing such an agreement.[11][12]

When Minister of Foreign Affairs Dominique de Villepin traveled to Chile in February 2004, he claimed that no cooperation between France and the military regimes had occurred.[13]

Attitudes of the United States and British governments

Spanish judge Baltasar Garzón tried to call former United States Secretary of State Henry Kissinger as a witness in his investigations into the Argentine disappearances.[14] Opponents in the United Kingdom tried to serve Kissinger with an arrest warrant during one of his visits to Britain.[15][broken link]

Following a decree of President Alfonsín mandating prosecution of the leaders of the Proceso for acts committed during their tenure, they were tried and convicted in 1985. (See Juicio a las Juntas) In 1989, President Carlos Menem pardoned them during his first year in office, which was highly controversial. He said the pardons were part of healing the country. The Argentine Supreme Court declared amnesty laws unconstitutional in 2005. As a result, the government resumed trials against military officers who had been indicted for actions during the Dirty War.[16]

Adolfo Scilingo, an Argentine naval officer during the junta, was tried for his role in jettisoning drugged and naked political dissidents from military aircraft to their deaths in the Atlantic Ocean during the junta years. He was convicted in Spain in 2005 of crimes against humanity and sentenced to 640 years in prison. The sentence was later raised to 1080 years.

Cristian Von Wernich, a Catholic priest and former chaplain of the Buenos Aires Province Police, was arrested in 2003 on accusations of torture of political prisoners in illegal detention centers. He was convicted at trial, and on October 9, 2007, the Argentine court sentenced him to life in prison.

A major trial, nicknamed "the ESMA mega-trial", of 63 people accused of crimes against humanity (lesa humanidad) during the 1976–1983 dictatorship, including those involved in death flights, was reaching its close in July 2015. 830 witnesses and 789 victims were heard.[17] There had been two previous trials after the Supreme Court struck down an amnesty the military dictatorship had granted its members; in the first the one accused committed suicide before a verdict was reached; in a 2009 trial twelve defendants were sentenced to life imprisonment.

In 2002 the Argentine Congress declared the date of March 24 as the Day of Remembrance for Truth and Justice, in commemoration for the victims of the dictatorship. In 2006, thirty years after the coup d'état that started the Proceso, the Day of Memory was declared a national public holiday. The anniversary of the coup was remembered by massive official events and demonstrations throughout the country.

During the Process, there were four successive military juntas, each consisting of the heads of the three branches of the Argentine Armed Forces: