Each August, Major League Baseball clubs hold a position draft to determine the players who will go to Arizona.[1] Most are Double-A and Triple-A Minor League players.[1] Each club can opt to send two players below Double-A. Foreign players are allowed, as long as the player is not on his native country's primary protected player list. The league is designed for these prospects to refine their skills and perform in game settings in front of major and minor league baseball scouts and team executives, who are in attendance at almost every game. Play begins shortly after the end of MLB's regular season in early October and ends in mid-November with a championship game between the winners of the East and West divisions.

A number of famous ballplayers have had stints in the Arizona Fall League. In 2016, former NFL quarterback Tim Tebow played. In 1994, the league got worldwide attention as Michael Jordan's second professional baseball league, when he played for the Scottsdale Scorpions. Other notable ballplayers who have played in the Arizona Fall League include Derek Jeter, Dustin Pedroia, Mike Piazza, Albert Pujols, Jimmy Rollins, Bryce Harper, David Wright and Tyler Naquin.

First presented in 2002 and named for Joe Black of the Brooklyn Dodgers, the award honors the 1952 National League Rookie of the Year.[2] 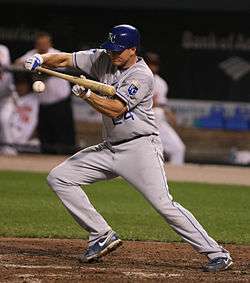 The Dernell Stenson Sportsmanship Award was created in 2004, in memory of Dernell Stenson,[6] an outfielder for the Scottsdale Scorpions (Cincinnati Reds), who was killed in a carjacking on November 5, 2003. The award is voted on by the managers and coaches of the six Arizona Fall League teams.[7]

The Arizona Fall League Hall of Fame was created in 2001. The AFL has had over 1,200 players who came through the league reach Major League Baseball. Additionally, 18 former AFL||Managers/players have gone on to manage a Major League club after managing in the league. To be considered by the selection committee, a player must be recognized at Major League Baseball level as a Rookie of the Year, a Most Valuable Player, an All-Star, or a Gold Glove or Silver Slugger Award winner.