The Arizona Diamondbacks, often shortened as the D-backs, are an American professional baseball franchise based in Phoenix, Arizona. The club competes in Major League Baseball (MLB) as a member of the National League (NL) West division. Since the team's inception in 1998, the franchise has played home games at Chase Field, formerly known as Bank One Ballpark. The ballpark was renamed in 2005, as a result of Bank One Corporation's merger with JPMorgan Chase & Co. The Diamondbacks have won one World Series championship (in 2001), becoming the fastest expansion team in the Major Leagues to win a championship, doing it in only the fourth season since the franchise's inception in the 1998 Major League Baseball season.

On March 9, 1995, Arizona was awarded a franchise to begin play for the 1998 season. A $130 million franchise fee was paid to Major League Baseball and on January 16, 1997, the Diamondbacks were officially voted into the National League.[4]

In the Diamondbacks' second season, they introduced a new logo which was a copper color snake in the shape of a letter "D". It was used on a solid black cap, which in the beginning, was worn as a road cap.

The franchise unveiled new uniforms and colors of Sedona Red, Sonoran Sand and black on November 8, 2006.[6] The red shade is named for the sandstone canyon at Red Rock State Park near Sedona, while the beige (sand) shade is named for the Sonoran Desert.[5] A sleeve patch was added featuring a lowercase "d" and "b" configured to look like a snake's head.[5] The team also kept the "D" logo, but was slightly altered and put on an all red cap to be used as their game cap. They also kept the "A" logo with the new colors applied to it, with a solid black cap used as the alternate cap. A similar color scheme is currently used by the Arizona Coyotes of the National Hockey League.

The primary television play-by-play voice for the team's first nine seasons of play was Thom Brennaman, who also broadcasts baseball and college football games nationally for Fox Television. Brennaman was the TV announcer for the Chicago Cubs and Cincinnati Reds (along with his father Marty Brennaman) before being hired by Diamondbacks founder Jerry Colangelo in 1996, two years before the team would begin play.

In October 2006, Brennaman left the Diamondbacks to call games with his father for the Reds beginning in 2007, signing a four-year deal (his FOX duties remained unchanged).

Jeff Munn is a backup radio play-by-play announcer; he served as the regular public address announcer at Chase Field in the early days of the franchise. He is well-known to many Phoenix area sports fans, having also served as the public address announcer for the Suns at America West Arena (now Talking Stick Resort Arena) in the 1990s. He is also the play-by-play radio voice for ASU women's basketball.

On November 1, 2006, the team announced that the TV voice of the Milwaukee Brewers since 2002, Daron Sutton, would be hired as the Diamondbacks primary TV play-by-play voice. Sutton was signed to a five-year contract with a team option for three more years. Sutton is considered one of the best of the younger generation of baseball broadcasters. His signature chants include "let's get some runs" when the D-backs trail in late innings. Sutton's father is Hall of Fame pitcher and current Atlanta Braves broadcaster Don Sutton.[7]

Former Diamondbacks and Chicago Cubs first baseman Mark Grace and former Major League knuckleball pitcher Tom Candiotti were the Diamondbacks primary color analysts for the 2006 and 2007 seasons. Former Diamondbacks third baseman Matt Williams also did color commentary on occasion, as did former Cardinals and NBC broadcast legend Joe Garagiola, Sr., a longtime Phoenix-area resident and father of Joe Garagiola, Jr., the first GM of the Diamondbacks (as head of the Maricopa County Sports Authority in the early 1990s, Garagiola, Jr. was one of the primary people involved in Phoenix obtaining a Major League Baseball franchise).

The Diamondbacks announced in July 2007[8] that for the 2008 season, all regionally broadcast Diamondbacks TV games will be shown exclusively on Fox Sports Arizona, and a few could possibly be shown on the national Fox MLB telecasts. Fox Sports Arizona (or FS Arizona) is currently seen in 2.8 million households in Arizona and New Mexico. The previous flagship station, since the inaugural 1998 season, was KTVK, a popular over-the-air independent station (and former longtime ABC affiliate) in Phoenix.

From 2009 to 2012, Mark Grace and Daron Sutton were tagged as the main broadcasters of the Diamondbacks with pre-game and postgame shows on Fox Sports Arizona, being hosted by former big-league closer Joe Borowski.

On June 21, 2012, Daron Sutton was suspended indefinitely, amid rumors of insubordination.[9] Then on August 24, the team announced that Mark Grace had requested an indefinite leave of absence after being arrested for his second DUI in less than two years [10] (Grace was later indicted on four DUI counts[11]). For the remainder of the 2012 season, Sutton was replaced by Greg Schulte (Jeff Munn replaced Schulte on the radio broadcast) and Grace was replaced by Luis Gonzalez. At the end of the 2012 season, the team announced that neither Sutton nor Grace would be returning for the 2013 season.[12]

On October 18, 2012, the team announced that Bob Brenly would be returning as a broadcaster, and that he would be joined by then-ESPN personality Steve Berthiaume.[13]

Games were televised in Spanish on KPHE-LP—with Oscar Soria and Jerry Romo as the announcers—but this arrangement ended prior to the 2009 season due to the team switching fully to Fox Sports Arizona and the lack of carriage of KHPE-LP on the Cox cable system.[14] 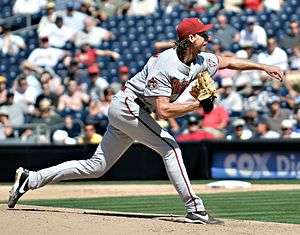