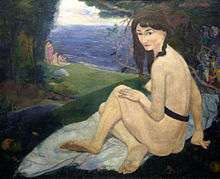 Armand Séguin (1869–1903) was a post-Impressionist French painter who is remembered for his involvement in the Pont-Aven School beginning in 1891. In 1892, he returned to Pont-Aven where he met Renoir and Émile Bernard. The following year, he associated with Paul Gauguin, who gave him lessons, and collaborated with Roderic O'Conor in producing etchings.[1]

He died in Châteauneuf-du-Faou at the age of 34, a destitute alcoholic who was suffering from tuberculosis.[2]