Pont-Aven (French pronunciation: ​[pɔ̃tavɛn]) is a commune in the Finistère department of Brittany in northwestern France.

Inhabitants of Pont-Aven are called in French Pontavenistes.

Pont-Aven is mainly known because of the group of artists who flocked round Émile Bernard and Paul Gauguin, and who were joined in 1888 by Paul Sérusier. They were collectively known as "Pont-Aven School" (French: École de Pont-Aven, Breton: Skol Pont-Aven).

The Musée des Beaux Arts de Pont-Aven houses a historical reconstruction of Pont-Aven at the end of the 19th century as well as a permanent collection dedicated to the Pont-Aven School.

Pont Aven still attracts artists and art lovers with many commercial galleries in addition to the town's public gallery. 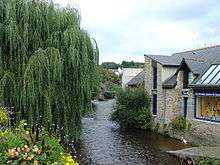 The Aven River runs through Pont-Aven. The river has relatively favourable water quality, with pH levels slightly alkaline at about 8.5 and electrical conductivity of 19 micro Siemens per centimeter.[1]

The town is at the interface of the tidal estuary and the freshwater river.

Before Pont-Aven attracted Gauguin and other artists it was a centre for milling with the river Aven being divided above the town to provide a mill race which powers a series of water mills. Whilst several of these retain their wheels only the last, the Moulin Poulguin, is still capable of operating. The mill is now a restaurant and you can see the machinery inside.

Just outside the town are the beech woods of the Bois d'Amour, a source of inspiration for many artists. The town is close to Domaine de Kerlann Holiday Park on the road to the adjoining commune of Nevez. To the northwest of the town, in the small community of Nizon, the beautiful ruins of Château de Rustéphan are to be found.

The Brittany Ferries flagship is named after the town.

Les Galettes de Pont-Aven is a 1975 drama on the life of a middle-aged aspirant painter who settles in the town.