Arriva North West[2][3] is a bus operator running services in North West England. It is a subsidiary of Arriva. 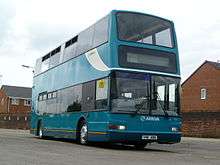 In July 2005 Arriva purchased Blue Bus of Bolton,[7] which almost doubled their presence in Greater Manchester. In January 2009, the Wales operation was split from Arriva North West as Arriva Buses Wales with the Arriva North West name resurrected for the North West England operations.[4][8]

The company has depots in:

Past depots, now closed or sold, have included:

As at October 2016 the fleet consists of approximately 783 active vehicles.[1] A wide variety of makes and types are represented, although DAF and VDL chassis predominate, accounting for around 58% of the fleet, and over half of the fleet carries bodywork by Wrightbus. The fleet is about 54% single-deck and entirely low-floor. Arriva stated its intention to make its main routes serving Liverpool completely low-floor by 2008 and similarly for the whole of Merseyside by 2011.[9] 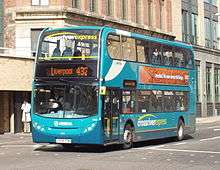 On the double-deck side of the fleet 128 Alexander Dennis Enviro400s entered service at Bootle, Green Lane, Speke, St Helens and Southport depots in between mid 2014 and mid 2015. With 152 examples overall it is the most common double deck type in the fleet.

Other deliveries include 44 Volvo B5L hybrids with Wright Eclipse Gemini 2 bodywork - which are currently the only hybrid vehicles in the fleet - entered service at Bolton and Birkenhead depots in spring 2013 - 11 at Bolton and 33 at Birkenhead for "Cross River" branded services.[10]

A total of 47 new VDL DB300s with Wright Gemini 2 bodywork were delivered to Speke and Winsford depots towards the end of 2011 and early 2012. The bulk of the order - 44 buses - going to Speke depot. Prior to this, thirty-five Alexander Dennis Enviro400s entered service in 2009, mainly displacing Volvo Olympians. Twenty-three of the Enviro400s were for routes through the Mersey Tunnels, these being the first vehicles in the fleet to carry the interurban (now standard) variant of Arriva livery, apart from a solitary demonstrator. The other twelve were for services between Bootle and Aigburth Vale.

Previously, 30 Volvo B7TLs with Alexander ALX400 bodywork had entered service on routes between Liverpool and Garston in 2006, marking the end of a 7½ year hiatus of new double-deckers. In recent times the double deck fleet has been boosted by 25 DAF DB250s with Plaxton President bodywork and 17 Wright Eclipse Gemini-bodied Volvo B7TLs from Arriva London. 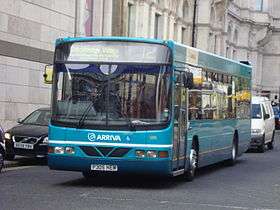 The standard single deck vehicle in the fleet is the VDL SB200 with Commander, Pulsar and Pulsar 2 bodywork; between them, these types now make up nearly two thirds (59%) of the single deck fleet. The second most prominent single deck type in the fleet is the DAF/VDL SB120 with Wright Cadet bodywork. The Dennis Dart - which once made up a significant part of the fleet - is now much less common with just one vehicle of this type in service as of October 2016. Other types in the fleet are the Wright Renown bodied Volvo B10BLE and the DAF SB220 with East Lancs Myllennium bodywork. Other new deliveries since 2007 have included ten Alexander Dennis Enviro300s, four Alexander Dennis Enviro200 Darts, fifteen Optare Solos, twenty six Optare Solo SRs, ten MAN EcoCity gas powered buses[11] and six Wright StreetLites.

Unusual vehicles in the fleet include four MAN 14.220s with East Lancs Myllennium bodywork which are based at Bolton depot. Until October 2008, twelve Neoplan N4016 were operating on service 18A from Liverpool to Croxteth Park, and were the only vehicles of their type in Britain - as well as three smaller Neoplan N4009 midibuses. Until early 2016 a batch of three Ikarus Polaris bodied DAF SB220s were operated on services in Bolton. These were the remaining examples out of seven that were acquired with the Blue Bus fleet, which accounted for a majority of those imported to the UK.

Speke depot received a total of ten Mercedes-Benz Citaro articulated buses from Arriva London in 2011. Two branded vehicles arrived for use on the AirLink 501 route in June 2011,[12] and from September 2011, a further eight standard livery examples found use on service 699 between the University of Liverpool and Carnatic Halls. In November 2011, articulated vehicles were first used on the AirLink 500 route between Liverpool city centre and Liverpool John Lennon Airport. These vehicles left the fleet in 2014.