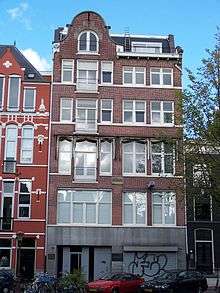 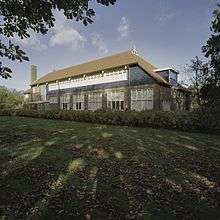 Art & Project (1968-2001) was a leading contemporary art gallery in Amsterdam and Slootdorp, the Netherlands, as well as an influential art magazine published by the gallery between 1968 and 1989.

The Amsterdam gallery Art & Project, led by Geert van Beijeren & Adriaan van Ravesteijn, opened in September 1968 in Van Ravesteijn's[1] parental home in Richard Wagnerstraat in Amsterdam-Zuid. The first exhibition was with German sculptress Charlotte Posenenske, which drew little attention. Early exhibitors included Jan Slothouber & William Pars Graatsma, Gruppe X, Paul Schuitema and Aldo van den Nieuwelaar.[2] Initially the gallery was open only during evening hours and weekends; later also in the afternoon. No invitations were sent; there were no vernissages. Also in 1968, the first issue of Art & Project Bulletin appeared, a magazine through which the gallery built an artistic network and enabled artists to have "exhibitions by mail".

From May 1969 onward, the gallery focused on conceptual artists, such as Douglas Huebler, Lawrence Weiner, Stanley Brouwn and Jan Dibbets. In March 1970, Gilbert & George repeated in Van Beijeren and Van Ravesteijn's gallery their famous Posing on Stairs performance as living statues at the Stedelijk Museum a few months earlier. In 1971 the gallery moved to Van Breestraat 18, close to the Stedelijk Museum and right opposite Riekje Swart's gallery, the other contemporary art gallery in Amsterdam with an international outlook. In 1973, Art & Project moved to nearby Willemsparkweg 36, where it would stay for the next six years. In 1973 also, the gallery opened an art space in Antwerp in cooperation with the Brussels gallery MTL (led by Fernand Spillemaeckers). In this gallery, named Art & Project / MTL, eleven solo exhibitions were staged in 1973 and 1974. Other galleries that Van Beijeren and Van Ravesteijn were in close contact with, included Konrad Fischer in Düsseldorf, Yvonne Lambert in Paris, Sperone in Turin, Jack Wendler in London and Claire Copley in Los Angeles.[3]

From 1979 until 1989 the gallery was based at Prinsengracht 785, after which it moved to Slootdorp, a remote village in the North of the Netherlands. The gallery closed in December 2001. Geert van Beijeren died a few years later.

Among the gallery's clients were important art collectors in the Netherlands and Belgium such as Edy de Wilde (director Stedelijk Museum, 1963-1985), Benno Premsela, Martin and Mia Visser, Frits and Agnes Becht, Herman and Nicole Daled, and Anton and Annick Herbert.[4] 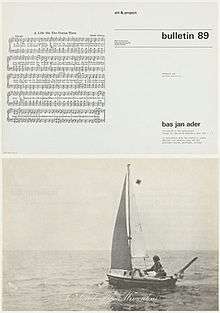 Art & Project was meant to be a monthly magazine but was not always published regularly (17 in 1972; only 8 in 1973). Between June 1983 and December 1984 no magazines were published at all. The magazine was printed in The Hague by printshop Delta in an edition of 800. The format was generally A3, which was folded and thus formed four A4 pages. It was generally printed black ink on white paper. In some cases the standard format was abandoned, for example:

The magazine was distributed free of charge to about 400 addresses (mainly of artists, galleries and curators). The remainder of each edition could be picked up at the gallery in Amsterdam. In some cases distribution (and even printing) took place in other cities:

Along with the Stedelijk Museum Amsterdam and Gallery Riekje Swart, Art & Project was a centre for renewal of contemporary art in the Netherlands and in Europe from the late 1960s until its closing down in 2001. The gallery's reputation helped to establish the city of Amsterdam as "an international nexus of intense art activities" in the 1960s and 70s.[5] Several museums and galleries have dedicated exhibitions commemorating the Art & Project legacy. In 2003/04, an exhibition on the role of Art & Project took place at the Musee d'art moderne et contemporain in Geneva. In 2009, the Museum of Modern Art in New York City organized an exhibition named "In & Out of Amsterdam" with mainly works that had been donated to the museum by Van Beijeren and Van Ravesteijn in 2007.[6] In 2010, an international symposium took place in Wiels, a centre for contemporary art in Brussels, focusing on the role of the galeries MTL (Brussels) and Art & Project (Amsterdam).

Van Beijeren and Van Ravesteijn, during more than 30 years collecting, acquired an impressive art collection that during the 1990s and 2000s has gradually found its way to various Dutch museums, as well as New York's MoMa. Original Art & Project bulletins have become much sought-after documents. The gallery's archive, as well as the couple's personal archive, measuring 92 meters, has been donated to the Rijksdienst voor het Cultureel Erfgoed (RCE), the Dutch national heritage organisation, and will be accessible to the public from 2014 onward.[7]